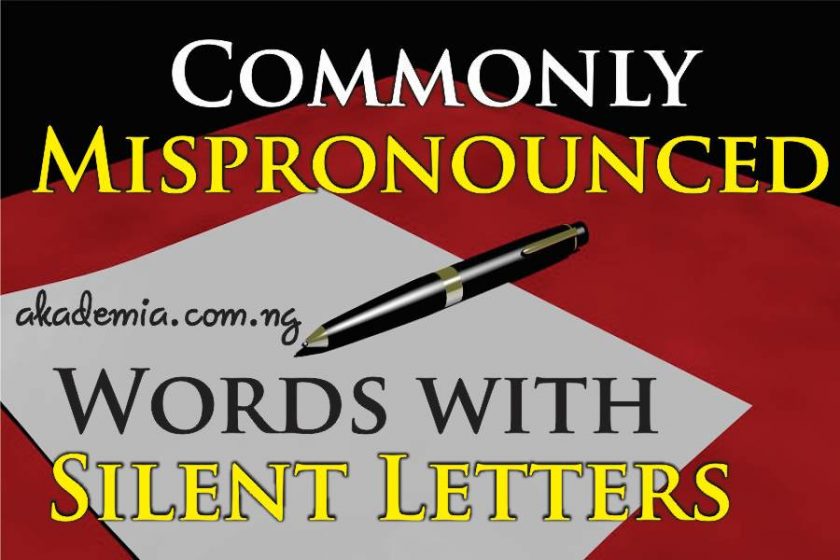 Welcome here! I know you are here to really find out about the Commonly Mispronounced Words with Silent Letters. It could also be that you click on this post in order to assist a friend who had got the knack of mispronouncing certain words. Whatever your reason is, you have done well because we learn throughout life and the day we stop learning, we start dying. Now let us get underway with the topic at hand.

There are doubtlessly many words in English which do not follow the same process or pattern when it comes to their orthography or phonography and their articulation, production, enunciation or pronunciation. Phonetics, as a branch of language study, also caters for how sounds are written and how they are pronounced. It is defined as the study of the physical sounds of human speech, concerned with the physical properties of speech sounds and the processes of their production, reception, perception, and representation by written symbols.

Let me explain few keywords here. You may ask, ‘What is orthography?’ Orthography has to do with the study/system of writing or correct spelling based on established order or usage. It also deals with the method of representing the sounds of a language by written symbols. Phonograph, among other meanings it has, has to do with the character or symbol used to represent a sound, especially one used in phonography.

So, the bottom line is that the way we write or represent sounds is as equally important as the way we speak or articulate those sounds and the two processes are NOT always the same! The English Language is a dynamic and maverick language replete with its peculiarities, oddities and nuances! Check this post, The Eccentric Nature of the English Language, to get a clear picture of what I mean! From now on, when you see a word, do not quickly assume that the pronunciation will follow the way it is written!

Below are ten categories of most commonly mispronounced words that have silent letters or sounds in them. Ensure you learn them properly and start pronouncing the words correctly.

Words ending in ‘b’ or with letter ‘b’ in the middle

All these words with letter ‘b’ are pronounced without the ‘b’ sound. The sound should not be heard any time you say these words.

These words are also pronounced without the initial letter ‘p’. So take note and never say any of these words with the sound ‘p’ coming out. It would certainly be embarrassing! Let’s go on to other set of words…

Your production of these words not begin from the ‘p’ sound but from the ‘s’ sound. I am sure you are getting the picture and you can correct your defaulting friends accordingly.

The initial letter ‘p’ in these ‘pseudo’ words is not enunciated! The word ‘pseudo’ carries with it the sense of ‘falsehood’ or something ‘not genuine’ or ‘pretended.

Whenever you pronounce all these and related words, ensure the initial letter ‘p’ is not articulated.

Words that begin with ‘Gn-‘

These are peculiar words with the initial letter ‘g’ silent. In pronouncing these words, only the sound ‘n’ is enunciated.

English Words that begin with ‘Kn-‘

The ‘l’ sound in all these words is never pronounced! Almost everyone defaults here. But that must not continue, especially now that you are reading this. Sports lover, take note of Newcastle and stop mispronouncing your club’s name. Christians are so used to the words, ‘apostle’ and ‘epistles’, yet they wrongly pronounce these words; you need to repent!

These are assorted words and every one of them has one unit of silent sound as indicated. But you need to understand that some of these silent sounds will become pronounced once the Parts of Speech in which they occur change. Let us consider these exceptions below:

Soften is a verb but when it changes to the adjective soft, the ‘t’ sound hitherto silent will become pronounced.

Resign is a verb but when it changes to its noun counterpart resignation, the silent ‘g’ sound becomes articulated.

Design is a verb; if it changes into the noun designation, the silent ‘g’ sound becomes articulated.

The same goes for the noun Paradigm; the hitherto silent ‘g’ sound come alive when it changes form to Paradigmatic which is an adjective.

Phlegm is also a noun whose silent letter ‘g’ will become overtly articulated when it changes to its adjectival form Phlegmatic.

Malign could either be a verb or an adjective depending on the context of usage. As an adjective, we can have malign motives or malign look. As a verb, we can have He maligns his boss everywhere. But when it changes to its noun form, malignancy, the previously silent ‘g’ sound becomes pronounced.

The same also goes for Benign, which is an adjective. When it changes to its noun form, benignity, the silent ‘g’ sound also becomes articulated.

Do you know that these words have exactly similar pronunciation?

You can read more on Homophones, Homonyms and Homographs.

Before I leave you to read other posts on this site or attend to some other things, Can I give you a short quiz? Don’t be afraid, you should get everything! Are you ready? Good! Your time starts now…