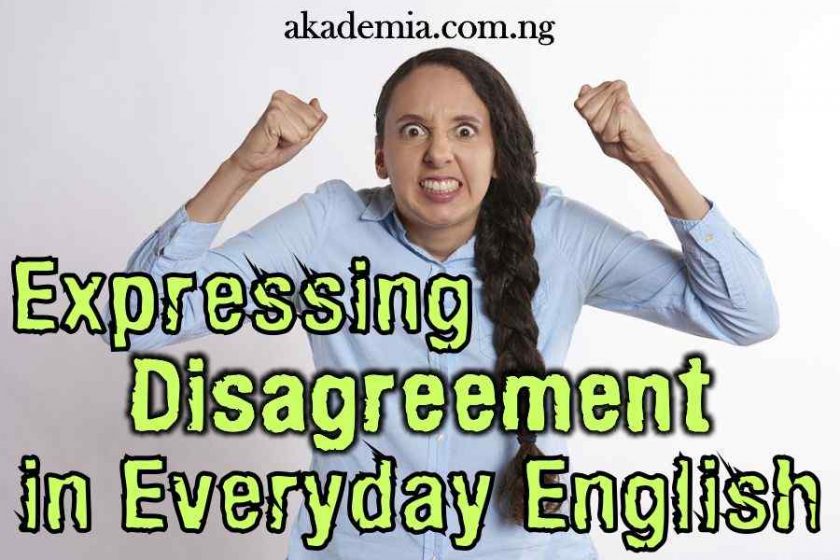 We know that one basic hallmark of language is its functionality. We make use of it daily in human linguistic transactions – conversations and interactions. This post tagged Expressing Disagreement in Everyday English with Examples focuses on how we can express disagreement in English with attendant examples.

When it comes to Expressing Disagreement in English with Examples, there are words and phrases that are suited to formal written contexts and those which are appropriate to informal spoken contexts. It is important to understand these words and expressions used in expressing disagreement in everyday English so that we can acquire more linguistic competence and performance.

Find below various ways we can express disagreement in everyday English:

We use this expression above when one does not agree with someone or something; consider the examples below to illustrate this phrase:

No It Isn’t/No She Doesn’t…

This expression is used when saying that something is not true, in a very direct way. See the examples below which exemplify this expression:

That’s Not True/That is Not the Case

We use this when saying that something is not true, in a very direct way. For example:

There are several ways of expressing disagreement in English when it comes to the formal contexts. Let us see the various instances…

I/Someone Would Dispute Something

This expression is used when saying that one disagrees with something. See these examples:

I/Someone Would Take Issue with Someone/Something

When saying that one disagrees with someone or something, this expression is used. Consider these examples:

I (would) Beg to Differ

When saying that one has a different opinion about something, especially in formal discussions, one uses this expression. For example::

I Don’t/Can’t Accept Something

This expression is used when saying firmly that one does not believe that something is true; for instance:

When disagreeing, people sometimes begin by saying I’m afraid… or I’m sorry… This is not an apology, but a way of making their disagreement sound more polite; for example:

Other Ways of Politely Disagreeing

Let us consider other ways of disagreeing politely. These include the following:

I’m Not So Sure/Are You Sure?

We use this expression when expressing doubt about what someone has just said; for example:

Expressing doubt or uncertainty is a much more polite way of disagreeing than saying directly that you think the other person is wrong.

I Wouldn’t Say That

This is used when disagreeing with someone in a polite way – used especially when you think someone is exaggerating: for instance:

We use this when saying that something else is more important: for example:

This comes up in discussions when one is adding a different opinion instead of directly disagreeing: Examples include:

To say that someone is mistaken is a common expression of disagreement when one thinks that someone has the wrong idea about something, without saying directly that they are ‘wrong’: Examples of this instance include:

Someone/Everyone is Entitled to Their Opinion

I once heard the expression: opinions are noses; everyone has them. We use the expression above when we politely say that we think that someone is wrong, especially when we think most people would disagree with them. For example:

With All (Due) Respect/With the Greatest of Respect

I am certain you have heard this expression or you have even used it yourself. It comes up when you are about to disagree with someone in a polite way in a formal discussion. For instance:

It is pertinent to let you know that there are several instances when one does not want to be tactful about strongly disagreeing with someone on an opinion or when the context or situation does not give room for that. At such times, one expressions that strongly convey the sense of disagreement. Such include the following:

I Completely/Totally Disagree Also I Don’t Agree at All

When disagreeing strongly with someone or something, this expression is used:

How can You Say That?/I Can’t Believe That You’ve Just Said That

We use the above expression when we are very surprised by what someone has just said, especially when we think they are completely wrong:

This is used in informal spoken English when disagreeing with someone very strongly, and saying that you think they are completely wrong: Example of this instance includes:

You might want to check other related posts as listed below. Kindly share with everyone in your circle of influence and your feedback, comments and questions are welcomed.