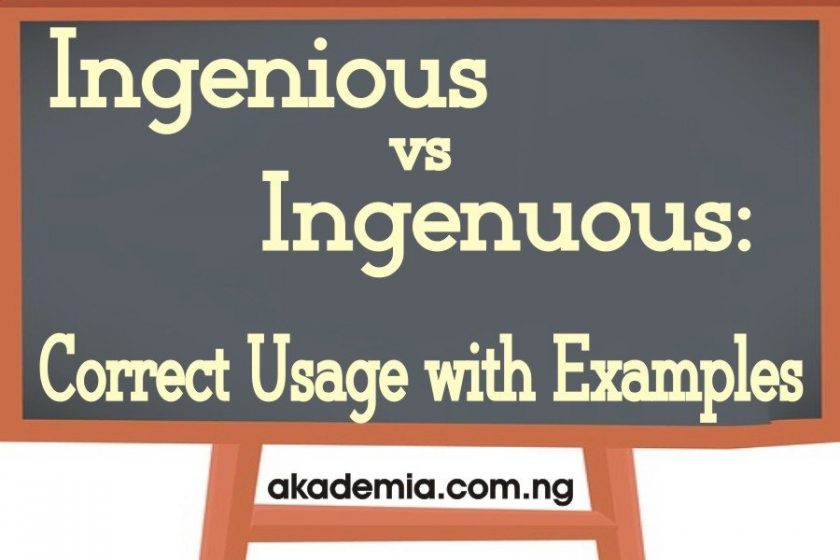 Hello my dear reader! I’m sure that since you have been following my posts you have learned quite some things. Great! I present to you this interesting post: Ingenious vs Ingenuous: Correct Usage with Examples. We cannot say that these two words we want to examine are homophones per se as they have slightly different pronunciation; but there is strong tendency to mix up the two and this is why we want to consider this post…

The two words belong to the same category of the Parts of Speech; and except for their different sixth letters ‘i’ and ‘u’, they would have passed for the same word; especially as they have equal number of letters that make them up, nine. But that is where the similarities end. Ingenious and Ingenuous are quite two different words! They seem related in orthography (spelling), but they are not, in semantics (meaning). What then do they mean, and how do we use them? Let us consider each word severally:

What Does ‘Ingenious’ Mean?

It is an adjective that means the following:

Examples of Sentences with Ingenious

This is also an adjective that means the following:

Examples of Sentences with Ingenuous

Ingenious and Ingenuous can both be used as structural elements of the same linguistic class or group but the difference is only in their meanings. Before we conclude, let us examine some words that are related to ingenious and ingenuous.

Words Related to Ingenious and Ingenuous

These two words have some other words that are related to them; and it would be worthwhile to consider some of them. They include the following:

Ingenuity is a noun which is related to ‘ingenious’. It refers to skill, cleverness or inventive talent in devising or combining. It also refers to candour or frankness, though such use is considered archaic. Some words are synonymous with ingenuity. They include: inventiveness, cleverness, resourcefulness, imagination, originality, creativity, skill, cunning, initiative, etc. Examples of this word as used in sentences include:

Another related word is ‘ingenuousness’. It is also a noun which has to do with showing innocent or childlike simplicity and candidness. ‘Ingenuousness’ is lacking craft or subtlety; the quality of innocent naiveté. Let us see some sentences that exemplify this word:

This is adverb derivation is another word related to the two words we have earlier considered. It means ‘in an ingenuous manner; frankly, straightforwardly.’ See these examples of its usage:

We should be careful not to confuse this word with ‘ingenuously’. ‘Ingeniously’ is an adverb that refers to something done in a clever or resourceful manner; that is, in an ingenious manner.

Disingenuous
This is an adjective and the antonym of ‘ingenuous’. It means the following:

The word formation process of the two other related words below is affixation. (See Word Formation Process). There is a prefix ‘dis’ which means ‘opposite’ and an adverb-forming ‘ly’ and a noun-forming ‘ness’ suffix respectively.

This word connotes the following:

This, as a related word, means the state or quality of being disingenuous. Consider the following:

There are so many words in English that are similar in various respects. Some are classified as homophones, some are homonyms while others are homographs. Take advantage of this platform and check out some commonly used wrong words. There are other commonly confused words and also some words with silent letters. Do not forget to share this post and other educative ones with your friends! You can also check out the following words to see their correct usages…Supersede vs Surpass, Aural vs Oral, Affect vs Effect, Belief vs Believe, Academic vs Academia, Access, Assess, Assent & Ascent and many others! Share please. You can also send in your comments and questions! See you around!