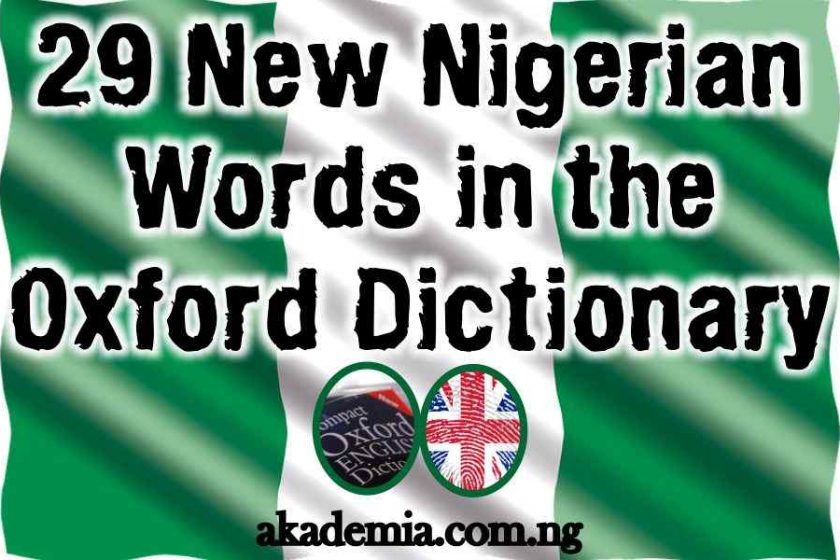 The year 2020 began on an interesting note for Nigeria and Nigerians as some peculiar expressions or words in the country became officially lexicalised in the Oxford English Dictionary (OED). The post New Nigerian Words Added to the Oxford Dictionary highlights these words with their meanings. The words are 29 in all.

Oxford English Dictionary Updates has this to say about its updates:

The OED is updated on a quarterly basis, and the updates make up the Third Edition of the OED. The material added to the dictionary includes revised versions of existing entries (which replace the older versions), and new words and senses both within the alphabetical sequence of revised entries and also across the whole A to Z range.

In his submission, Danica Salazar, World English Editor for OED has this to say in the Nigerian English Release Note:

By taking ownership of English and using it as their own medium of expression, Nigerians have made, and are continuing to make, a unique and distinctive contribution to English as a global language. We highlight their contributions in this month’s update of the Oxford English Dictionary, as a number of Nigerian English words make it into the dictionary for the first time. The majority of these new additions are either borrowings from Nigerian languages, or unique Nigerian coinages that have only begun to be used in English in the second half of the twentieth century, mostly in the 1970s and 1980s.

Read the expressions below to see some examples of the new Nigeria expressions which have now been added to the English language:

Prior to 2020, many words in the sentences above would be considered anomalous to the English language and this would have rendered the expressions incorrect. But thanks to OED which has formally admitted these words into the Oxford English Dictionary.

Consequently, these expressions are perfectly correct and formal. It should be noted that some of the words are borrowed while others are coinages according to OED. You need to see the post on Barbing Salon and Several or Severally to know the position of English on these expressions prior to 2020.

See what Danica Salazar has to say further on the point hinted on above:

A few other expressions in this update would require some explanation for non-Nigerians: a barbing salon (earliest quotation dated 1979) is a barber’s shop; a gist (1990) is a rumour, and to gist (1992) is to gossip; when a woman is said to have put to bed (1973), it means that she has given birth; something described as qualitative (1976) is excellent or of high quality. By focusing on contemporary language in this update, and adding words and phrases that form part of the everyday vocabulary of today’s Nigerians, we hope to give a flavour of English-speaking.

This is both an adjective and a noun: “Of, relating to, or used in agriculture; = agricultural adj. Now chiefly West African.”

This is a noun that refers to “A barber’s shop.” See the post on Barbing Salon

A noun that means “A roadside restaurant or street stall with a seating area, selling cooked food at low prices. Cf. bukateria n., mama put n. frequently as a modifier…”

This is a “transitive. Ghanaian English and Nigerian English. To acquire (money) quickly and easily. Frequently in negative sense: to misappropriate, extort, or…”

A noun referring to “Bribery and corruption in public life; misappropriation or embezzlement of funds. Also as a modifier.” (https://akademia.com.ng/nominal-group-english-definition-functions-examples/)

A noun denoting “A yellow minibus that carries passengers for a fare as part of an informal transport system in Lagos, the largest city in Nigeria.”

This entry appears under ‘eat’ which is a verb. To eat money is “Now chiefly Nigerian English and East African. To eat money: acquire money dishonestly; misappropriate, extort, or embezzle funds.”

This is a noun that denotes “The final four months of the calendar year (September to December), esp. considered together as a period of heightened or intense activity.”

“The moment at which a race, esp. a motor race, is flagged off (see flag v.4 additions a); the start of a race. Now chiefly Indian English and…” flag, v.4, Additions: “to flag off. Transitive (usually in passive). To direct (a driver) to start a motor race, esp. one in which the competitors start at intervals, by…” flag, v.4, Additions: “to flag off. Transitive. Indian English and Nigerian English. In extended use: to start (an event or undertaking).”

“Nigerian English. Idle chat, gossip. Also: an instance of this, a rumour or piece of gossip.” gist, v.2: “transitive. To reduce (a text, document, etc.) to its essence or gist; to condense, summarize, or précis.”

An adjective: “Of or relating to a governor or governorship; = gubernatorial adj.”

“The Nigerian Hausa-language film industry, based in Kano; Kano regarded as the centre of this industry. Cf. Nollywood n.”

“In singular and plural. A condition in which one or both of a person’s knees are turned inwards, resulting in a noticeable gap between the feet when…”

“A street vendor, typically a woman, selling cooked food at low prices from a handcart or stall. Also: a street stall or roadside restaurant run by…”

A noun and adverb that means “The day after tomorrow.”

This is both an adjective and a noun meaning: “Not native. In later use chiefly West African: belonging to an ethnic group considered not to be indigenous to a particular area.”

“In Nigeria: a motorcycle which passengers can use as a taxi service.”

To put to bed

The entry is found under ‘put’, a verb particular to “West African meaning to put to bed: to give birth. Also: to give birth to (a child).”

Found under ‘rub’, a verb. “To rub minds (together): (of two or more people) to consider a matter jointly; consult and work together; to confer.

This is an adverb that is “Used for emphasis after a statement or rhetorical question, often expressing irritation or impatience.”

A noun that means: “A celebration or event to mark a person’s departure; a send-off. Frequently as a modifier, as send-forth ceremony, send-forth party, etc.”

An adverb, another addition: “East African and West African. On several occasions; repeatedly.”

This is an adjective “Denoting an imported second-hand product, esp. a car.”

This is a transitive verb, Nigerian English which means “to allocate a nomination for (a political office) to a candidate from a particular region, under the zoning system: see zoning, a noun. Also with the candidate as object of the verb. Usually in passive. Frequently with to, indicating the region to which a nomination is allocated.

This is good news to Nigeria and Nigerians that some lexical items peculiar to this country have now been codified, lexicalised and standardised. Nigerian English has come to stay. Do share this post with all your friends and let us promote the Nigerian English. We hope more of Nigerians expressions would continually make their ways into the English language.