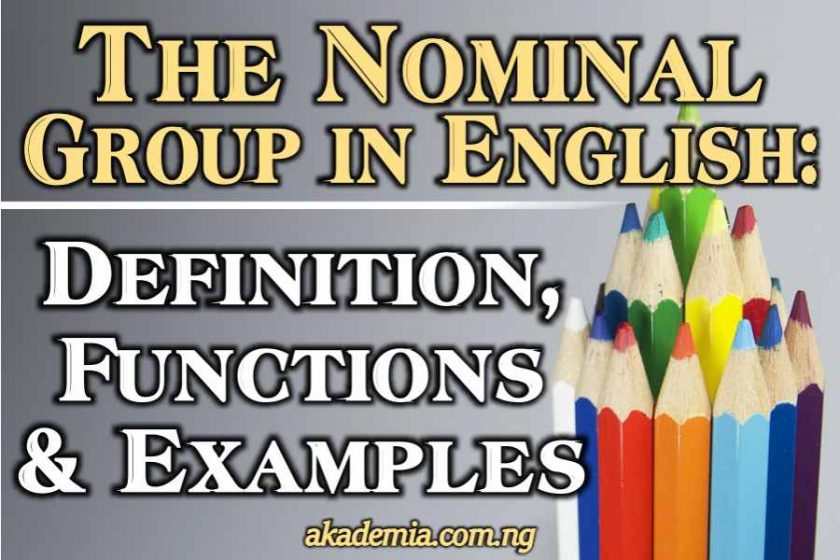 When you see the word ‘nominal’, it is a simple reference to the word ‘noun’! It is such a very important group in the English language. So the post, Nominal Group in English: Definition, Functions and Examples provides answers to all the questions you might have as far as this group is concerned. If you have any questions, send them right to me in the comment box and I will reply you.

Let us begin this discourse with the types of nominal groups in English.

Types of the Nominal Group

The nominal group has two distinct types. These are:

This has a noun as the headword. for example:

This has an adjective as the headword. This normally comes up under the complement aspect but can also feature in the subject position. For instance:

There are about four (4) possible structural arrangements of the nominal group and they include:

Note: we enclose the headwords in 1 – 4 in square brackets.

The Constituents of the Modifiers

The following grammatical entities can occupy the position of the modifier in a nominal group. They include:

The Constituents of the Qualifiers

The following grammatical entities can occupy the position of the qualifier in a nominal group. They include:

The nominal group or noun phrase performs several syntactic functions. Let us consider some of these functions:

The subject of a sentence

A complement of the Subject or Subject Complement

A complement of the Object or Object Complement

Let us demonstrate this with the following sentences:

Apposition has to do with the relationship between two usually consecutive nouns or noun phrases that refer to the same person or thing and have the same relationship to other sentence elements. So, a nominal group functions as apposition. Examples include:

Completive of a Prepositional Phrase

What a detailed discussion on the Nominal Group in English! I know you will want to check our posts on the other groups in English that make up the structure of the English simple sentence: the adverbial group, the verbal group and the prepositional group.

See also the post on English Appositions. Kindly share this knowledge with your friends so that all of us can be well informed and properly educated in the Queen’s language!