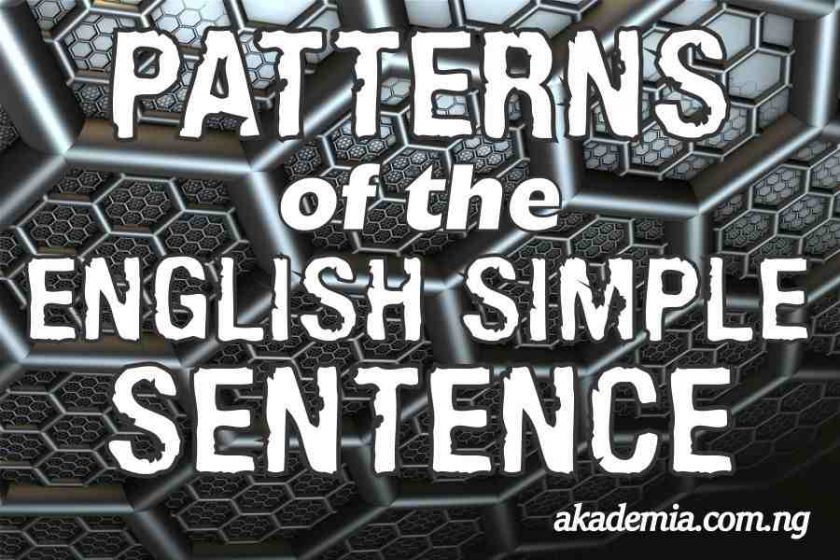 Hello dear reader, I want you to know that there are many sides to the English sentence that we need to explore. That is why here, we want to examine Patterns of the English Simple Sentence. We have looked at the simple sentence and its various definitions, we have also examined types of sentences from two perspectives: types according to structure and types according to function. We even dedicate a post to the syntactic elements of the clause structure.

Patterns of the English Simple Sentence

In this pattern, the subject is always the first structural element and the predicator immediately comes after it. That is, we have the Subject-Predicator (S-P) structure. Any sentence that does not follow this pattern is simply a non-basic sentence. In other words, any alternative to the subject-predicator structure or pattern results in the non-basic pattern. Let us see some examples:

This, by structure, involves modifications of the basic simple sentence pattern. In other words, in the non-basic pattern of the simple sentence, the Subject-Predicator (S-P) structure is slightly or wholly affected by the arrangement of syntactic elements. There are various forms by which this is done. Let us see them…

The Pattern of the Imperatives Sentence

Examples of this include these imperative sentences:

The subjects in the sentences above have been deleted and the predicator used are also imperatives.

The Attachment of the Optional Adjunct to the S-P Structure

This has to do with the insertion of an adjunct in-between the subject and the predicator such that it alters the S-P structure and results into a non-basic pattern. For example:

The Pattern of the Interrogative Sentence

This pattern alters the basic pattern of the simple sentence. The following interrogative sentences show this:

Here, there are instances of the S-op inversion; the subject-operator inversion. The auxiliary is the operator which can come before the subject. That is, ‘can you’ ‘is your name’, ‘are you’, ‘do you’, etc.

The Pattern of the Exclamatory Sentence

‘How’ is an ‘ex-element’; that is, an exclamatory element and ‘what’ is a complement intensive.

Movement of Elements for the Sake of Emphasis

Sometimes, in order to emphasise a point, certain syntactic elements of the simple sentence are moved. Let us see the following examples:

The complement intensive elements have been moved to the front for the sake of emphasis, resulting in a non-basic sentence pattern.

This is also an instance of non-basic simple sentence pattern, a product of a transformation, because there has been an inversion of the complement to the subject position resulting in a passive structure. Consequently, all passive sentences are non-basic sentences.

The sentence is a non-simple sentence because it contains two predicators. See more discussions on Structural Classification of the English Sentence.

It is also important to note that it is not the length of a sentence that determines whether it is simple or non-simple; it is the structure. Simply check the sentence whether it follows the rule for basic or non-basic sentence before you classify it as either. Consider this sentence which is a non-basic simple sentence:

Note that the letters used at the end of the sentences we used as examples represent the following:

Now I will make this easy for you. I will give you the following sentences in the non-basic form and all you need do is turn them into the basic form. Do you mind trying? Send me your answers in the comment box and share with your friends too.

I wish you all the best. Do send your answers in the comment box.