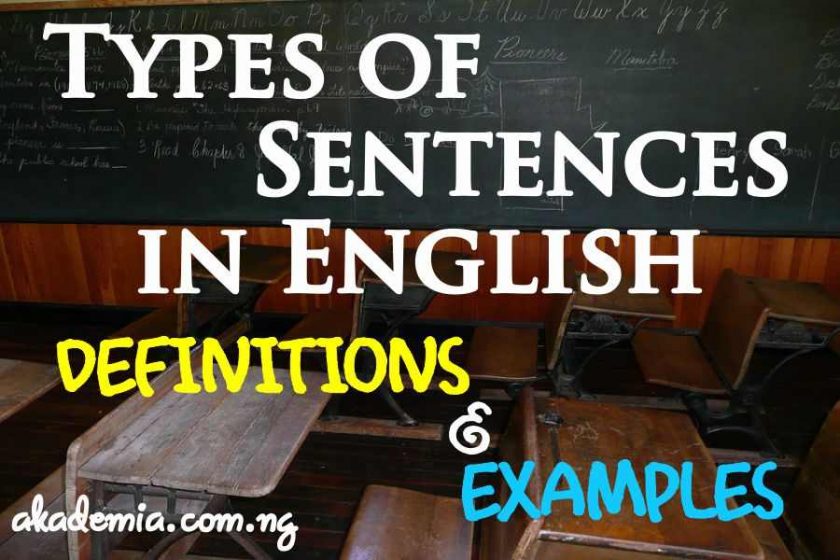 Arrangement of Sentences in English

Other Types of Sentences

What is a Sentence?

The sentence in English has various definitions but we shall examine it from four different perspectives. These include: the orthographic, semantic, grammatical or syntactic and the phonological levels. At the orthographic level, we can describe the simple sentence as a group of words that is usually marked in writing by the following punctuation marks: question mark, full stop, exclamation mark or in some cases semi-colon. From the semantic level, a sentence is a group of words that must be meaningful in context.

In other words, a potentially complete stretch of utterance will be, as a whole utterance, meaningful within the situation in which it is uttered. At the grammatical level, we can define a sentence as a group of words that contains at least a predicator. The sentence is the largest unit of grammatical analysis as well as the upper limit of structural statement at the grammatical level. From the perspective of phonology, we can describe the simple sentence as a stretch of speech that one utters with a complete intonational tune preceded and followed by silence. (See the post on Definitions and Constituents of the Simple Sentence).

Types of Sentences in English with Definitions and Examples

In all there are twelve (12) different types of sentences in English. There might be other ways by which other classify them but we will focus on these 12 types…

A fragmentary sentence is an incomplete statement, or phrase or a subordinate clause punctuated as a complete sentence. A fragmentary sentence is one that is fragmented; that is it consists of fragments; it comprises broken off and detached parts. It occurs in our speech where it makes sense as responses to what someone has said or as addition to what we have already said.

In other words, it is a sentence that that expresses a thought or idea that is not complete. A sentence is fragmented also, when major syntactic elements of the sentence are missing. A fragmentary sentence is likely to be a fragmentary idea to be finished or added to another idea and we can correct it by joining it to another sentence or by supplying the subject and a predicator; that is, converting it to a full sentence.

Examples of a Simple Sentence

Examples of a Compound-complex Sentence

The type of sentence comprises three distinct main clauses which are independent of one another without any dependent clause.

Examples of a Multiple Sentence

A minor sentence expresses a complete unit of meaning albeit without the presence of a verb; that is it omits one of the structural elements like the subject, predicator, or even complement. Check out the post dedicated to Minor Sentence for more explanations on its definitions, types and examples.

This is just an extension of the multiple sentence with the addition of at least, one subordinate clause. In other words, it is a sentence that has at least three main clauses and at least, one dependent clause.

Examples of a Multiple-complex Sentence

This sentence, among other things it does, makes a statement, states fact, expresses hope, wish or prayer, informs, supplies ideas, educates and declares as the name goes.

A compound sentence comprises two independent clauses with no subordinate clause. That is, the two clauses that make up a compound sentence are main or alpha clauses which can stand on their own separately from the coordinating conjunction that joins them. (See Coordinators and their Semantic Implications).

Examples of a Compound Sentence

Examples of a Complex Sentence

This is a sentence that shows emotions such as surprise, excitement, anger, joy, pain and other forms of emotions. The exclamation mark usually follows an exclamatory sentence. We do not normally use the mark in formal writing; and a period does not immediately precede or follow the mark.