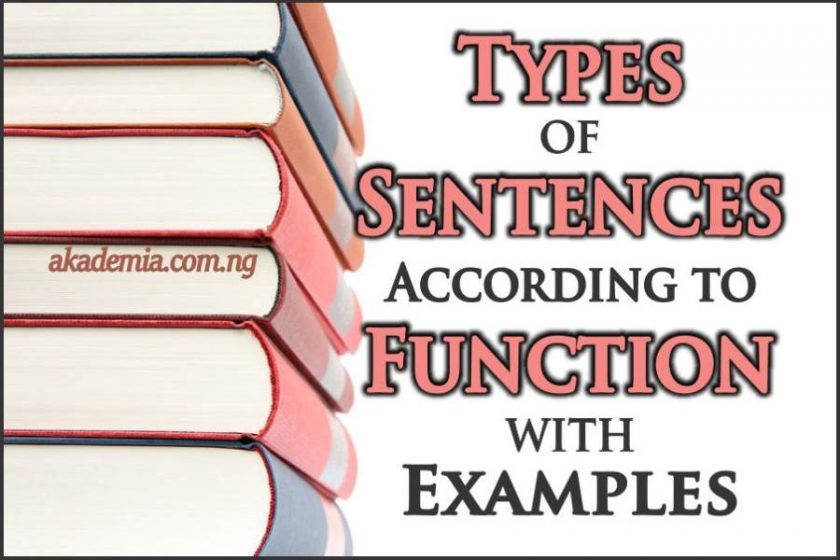 In the English Rankscale, the Sentence is the largest grammatical unit and, by definition, it refers to a group of words that begins with a capital letter and ends with any of these three punctuation marks: the period or full stop, the exclamation mark and the question mark. This post, Types of Sentences According to Function with Examples, examines closely the different types of English sentences based on functions using copious illustrative examples.

Types of Sentences According to Function with Examples

Functional Classification of the English Sentences

There are five (5) types sentences based on structural classification. These are:

Let us look at each of these types…

Syntactic formation of a declarative sentence

Let us see the next type of sentences…

This type of question requires yes or no for an answer e.g.

In the syntactic of the polar question, there is subject-operator inversion; that is, we inverse the primary auxiliary such that it takes the place of the subject. We also call this ‘S-op’ inversion. For instance:

Take note that at the end of the question, the voice pitch rises.

Unlike the polar question, which has the possibility of only two answers, that is ‘yes’ or ‘no’, ‘wh’–question permits broad or open-ended number of answers.

Note that the voice pitch drops at the end of the question. This distinguishes it from the Polar Question among other things.

In forming this type of question, the Q-word (what) comes first, the operator (the auxiliary verb) follows, the subject comes next, then the lexical verb and the adjunct.

This type of question is one that shows emotional feelings – a kind of yes-no question with the force of an exclamation. In other words, it is a question that exclaims! It is said in a falling tune or intonation. Consider the following sentences:

The syntactic formation is S-op inversion (subject-operator inversion) like the Polar Question.

A tag question is a short question which we add to a statement, to elicit a confirming response from the hearer. We use a tag question to turn a statement into a question. Consider these examples:

The question is formed from the statement using the subject and the operator; the syntactic formation is a subject-operator (S-op) inversion.

Moreover, there are rules for forming the most common types of tag questions and they are:

This type of sentence expresses an emotional feeling and it is usually ended with an exclamatory mark. For example:

In the formation of this type of sentence, the EX-element, which brings out the exclamation, always comes first; then a complement intensive usually follows and the subject and predicator follow respectively. Each sentence formation depends on the structure of the exclamatory sentence. Look at this example:

(the EX-element ‘how’, an adjunct, comes first, then comes the subject, predicator, the complement intensive and the adjunct respectively.

An imperative sentence is one that makes or expresses a command, gives an order or gives an instruction. Depending on the tone of the voice, a command sentence can also be a request sentence. Note that we use ‘may’ and ‘could’ to make polite requests in English. See Modal Auxiliary Verbs. Examples of the interrogative sentence include:

Minor sentences which do not belong to any of the types of sentences we have discussed earlier but which exist nonetheless in English. Generally, a minor sentence omits one of the structural elements like the subject, predicator, or complement. Some simple sentences are not usually represented fully in some contexts. In such contexts, the simple sentence may be represented by any of the elements or a combination of the elements in the SPCA framework. The process of ellipsis or deletion has been used. A minor sentence is similar in nature to a verbless sentence. Let us see what a verbless sentence is…

This is a unit of grammar that is independent; that is, it is not part of some other grammatical units, and yet does not contain any verb. Although a verb is essential to a sentence, a verbless sentence is very common in spoken language and are far from rare in written texts. Examples are:

Broadly speaking, we can divide the minor sentence into two types. They include the following:

The realisation of this type is limitless since we can still model or produce new ones after them where necessary. We commonly use this type in newspaper headlines, greetings, adverts, conversations, commentaries, etc. Let us see few examples:

Responses to Conversations and Questions

Most responses to questions are somehow minor sentences.

Non-productive minor sentences are those with fixed forms as we cannot model new ones after them. We can find examples in greetings:

These subdivide into two:

These are usually traditional expressions which we cannot add to. Often, they formed a closed class.  Examples include:

It has been a quite interesting discussion on the functional classifications of English sentences. I am sure you will be able to classify any sentence you come across based on its function. Right? Great!