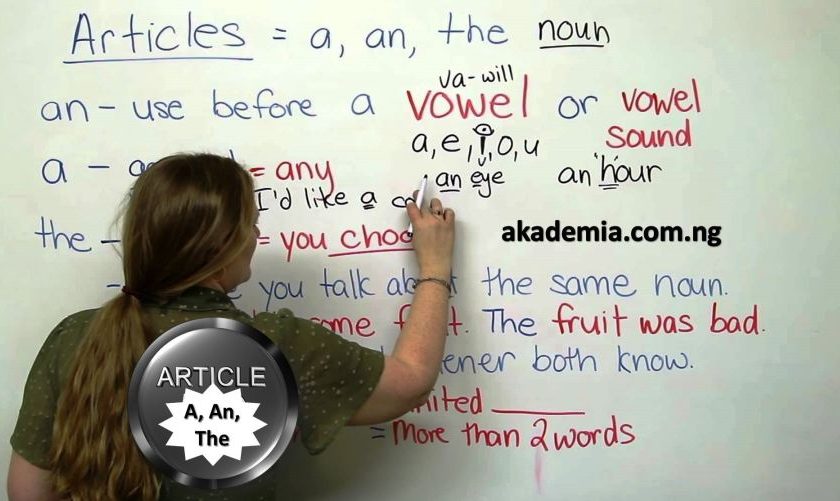 This post ‘Articles in English: types and examples’ examines another linguistic member of the Closed class family of the English Parts of Speech or Word Classes. It offers the definition of an article, the types with examples, the forms in which it exists and uses of articles among others.

What is an article?

Articles are subcategory of the Determiners; they are the most common English determiners. They usually begin a noun phrase and normally followed by a noun, with or without modifiers.

Forms of the Articles

The spelling of the indefinite article and the pronunciation of both the definite and indefinite articles depend on the initial sound of the words they come before. Ordinarily, articles are not stressed but for special emphasis, they may be stressed. The unstressed definite article ‘the’ is pronounced /ð∂/ before consonant sounds and /ðι/ before vowels sounds.

We should take note that it is not the SPELLING of a word that determines which article it takes, but the PRONUNCIATION. See the following words: a European, a UN spokesperson, an X-ray, an FBI agent, an X-men movie, etc.

We should also note that words that have silent ‘h’ takes the article ‘an’ before them as in an hour, an heir, etc. though there are few exceptions to this where either the article ‘a’ or ‘an’ can be used before words beginning with ‘h’ as in a(n) hotel, a(n) historical novel, etc.

Here, we discuss the general grammatical rules guiding the use of articles and they are as follow:

We can also write these sentences above to accommodate the definite article. See the following:

Other Uses of Articles