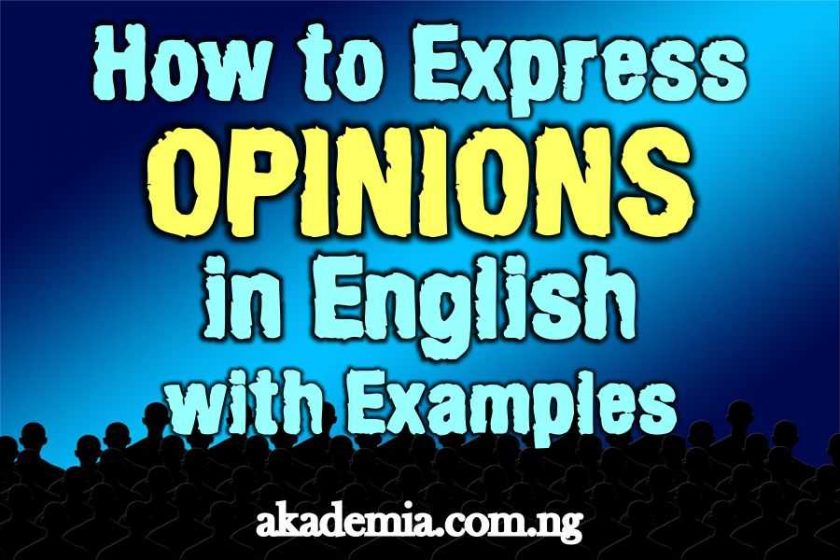 I have a friend who has got several witty and pithy sayings. One of his popular lines is: “opinions are noses, everyone has them.” What a spot-on apothegm! This post titled, How to Express Opinions in English with Examples, focuses on how we can express our opinions or sentiments in the proper way when it comes to everyday English.

In my previous posts, I have written on how to do some things in English. These include How to Agree in English, Disagreeing in Everyday English and How to Apologise in English. You definitely want to check them out. There are many other ‘how tos’ in English that I will tell you about; just connect with us on our Social Media platforms and you will be duly notified.

Now to our discussion for today: How to Express Opinions in English with Examples, let us see the various ways by which we can properly express our sentiments, views and thoughts in English Language…shall we?

How to Express Opinions in English with Examples

The ways listed and explained below have to do with verbal expressions. We shall subsequently consider the written alternatives…

This is the usual or typical way of talking about one’s opinions in everyday English. Let us see some examples:
• I think that the law should be changed.
• We always thought he was so cool.
• Do you think that people should be able to work as many hours as they like?
• Do you think people would drink less in the future?

Note that ‘that’ is optional; it is also advisable not to use this phrase in essays and formal writing. See next page for written alternatives.

Do note that I believe (that) sounds rather serious; and is used about things that you believe in very strongly.

This is used when talking about one’s opinions, especially when they are based on one’s general feelings. For instance:
• I feel he is too old for the job.
• I feel that appearances are very important.
• The President remarked, “I can’t help feeling that our main priority should be dealing with climate change.”

This is used when giving one’s opinion about something, especially when there is a lot that one wants to say about a situation. For example:
• It seems to me that the world would be a much better place if we didn’t rely so much on our cars.
• The way I see it, there are only two real choices.
• If you ask me, they should give kids fewer tests, not more.

You need to understand that using these phrases will give you time to think about what you want to say. In addition, it is a good idea to vary your language and use them instead of always saying ‘I think that …’ as there are many ways to say the same thing in English. This makes our utterances creative and not monotonous.

We use this expression when talking about our opinions, especially when they have to do with serious subjects. Examples of the usage include the following:
• In my opinion, he’s mistaken.
• It is, in my view, one of the finest buildings in London.
• Learning Chinese characters is, in my opinion, the most time-consuming and difficult part of the language.
• In my opinion, fizzy drinks are unhealthy.
• In my view, getting married in one’s twenties is the best.

It should be noted that this expression should not be used in formal essay writing. For instance, do not say ‘according to my opinion’.

This is used when introducing one’s opinion by mentioning something important about oneself, which makes one able to talk about it from personal experience, or something that affects one’s feelings about it. Consider these examples:
• Speaking as a regular user of the railway, I can only say that the service has gone down in recent months.
• Speaking as a mother of two young children, I feel really concerned about the future of our planet.

How to Express Opinions in English with Examples

We have examined in the discussion above how to express opinions in English with examples; let us proceed to see how this is done in formal written English.

Before we proceed, it is important to stress that in formal written English, it is the norm to usually avoid using phrases that begin with ‘I’, and ‘in my opinion’ when writing about one’s opinions.

So, let us get to our discussion on how to express opinions in English with examples…

This is used in formal writing instead of ‘in my opinion. Let us see some examples:
• This is the most important section of the book, in this writer’s opinion.
• It is this writer’s view that the new city centre is a great improvement on the old one.

We use this when referring to another writer’s opinions, and what they have said. Consider the following examples:
• As Lowry points out in her article, teaching does not have the same status as research.
• As Dawkins notes in his discussion of the evolution of the eye, ‘eyes have evolved between forty and sixty times, in many different invertebrate groups.’
• One’s learning determines one’s earning; as the writer remarks.

This expression is also used when referring to another writer’s opinions, and what they have said. See the following:
• Freud himself expressed the view that some dreams may be forgotten because they are too upsetting.
• Thomas Jefferson expressed the opinion that for a state to be healthy, it needed to have a revolution every 20 years.

We use this when saying what other people, organizations, reports etc. have said. This is usually the norm in academic papers. See these examples:
• According to the researchers, ‘some patients tended to see their illness as a punishment’.
• Locally-grown food can be better for the environment than organic food, according to a report published yesterday.
• According to Matthew 6:22, it is important to keep a single eye.

Be of the Opinion That/Take the View That

This is used when saying what someone’s opinion is. For example:
• 6 out of 10 EU citizens were of the opinion that the European Union should have a single currency.
• The Court took the view that he had acted legally.
• The liberal societies are of the opinion that Africans leaders are megalomaniac.

It is Someone’s Belief That

This expression is used when saying what someone believes to be true. For instance:
• It is our belief that children should enjoy their time at school.
• It was their belief that certain individuals were born with criminal tendencies.

We use ‘for someone’ when saying what someone’s opinion is, especially when this is a general opinion that affects their other ideas about a subject. Consider these examples:
• For Dawkins, genes are everything, or at least they can account for everything.
• For Ruskin, art was something that could not be produced using machines.
• Art is for art sake, for some philosophers.

From Someone’s Point Of View/Standpoint

I am certain you have gleaned one thing or another from this post titled How to Express Opinions in English with Examples. Some of the things you have learnt would certainly be useful for you enhancing your spoken and written texts.

I have some other related interesting posts that are quite educative; kindly go through them. Remember to share this with your friends and send your comments and questions in the comment box. Connect with us on our Social Media platforms See you around.