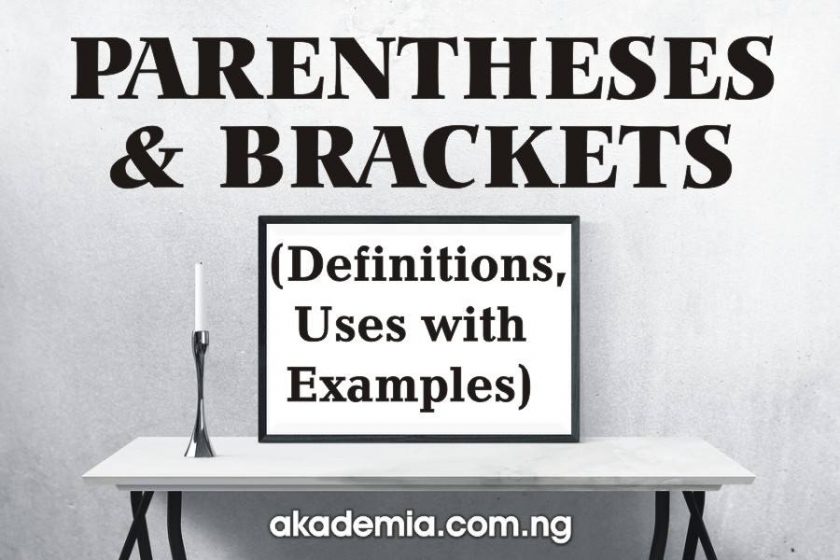 Welcome to Akademia. For some time now, we have focused on Punctuation Marks in English. In this post titled Parentheses and Brackets – Definitions, Uses with Examples, I would like to focus on the mark parentheses and brackets and show you their various uses. Here we go…

In considering this important punctuation marks which make our writings meaningful and unambiguous, let us start by describing these marks, see how they are additionally described and, finally, see some uses to which we can deploy them. Shall we?

It is important to note that whatever information within parentheses is usually optional; that is, we can discard or omit it and the structure of the sentence in which it occurs will not be affected. However, in this case, we must not insert any punctuation mark directly before the opening parenthesis.

Let us see some of its uses…

There are many uses to which the parentheses can be deployed. Let us see some of them…

When we have to enclose certain details, we make use of the parentheses. Let us consider some examples:

To Enclose Figures or Letter Used to Enumerate Points

In enclosing figures or letters that we use in enumeration, we make use of parentheses; that is, to separate something, e.g., a number or symbol, from the surrounding text. For example:

(3) Rapid growth spurt, which brings the body close to its adult height and weight in about two years.

(4) The appearance of the sex drive.

(5) A period of emotional stress, resulting from the rapid and extensive physiological changes occurring at pubescence.

(6) The development from a dependent to an independent person.

(a) because it is too expensive, and

(b) because it is unlikely to be effective in the long term.

Around Optional or Alternative Material

We use Parentheses around optional or alternative material. For example:

Parenthesis has its origin in Greek and it means “insertion”. It is one of the marks we usually call (ordinary or curved) brackets in the UK or material set off by a pair of brackets (or commas or dashes). We usually use parentheses to refer to the pair of brackets often used to set off a parenthetical item; but we also use it to mean more than one parenthesis; that is, parentheses is the regular plural.

Geof Garvey has this to say about parenthesis and parentheses:

One occasional source of confusion is that parenthesis can refer either to one of the marks or to the matter that the parentheses enclose. Occasionally in the most erudite writing you may encounter that second meaning. That sort of parenthesis may also occur between dashes or commas.

Brackets (as British English refers to it) are primarily used to enclose interpolated (inserted or included) materials and also to set off parenthetical matter within passages already enclosed by parentheses.

In other words, we use brackets to insert comments and explanations in material quoted from other writers. We can put such comments in brackets to show that they were not actually used by the speaker or writer.

We use brackets around text that someone, other than the original writer or speaker, adds; especially, to explain or comment on a word or phrase used in a quotation. For instance:

We use brackets to provide the needed information when we take a quotation out of its original context. For example:

The word sic (a Latin word for ‘thus’), is in in brackets. This indicates that the preceding word, though wrong, is the one the writer actually used in the original quotation. Consider this:

This punctuation mark, which we have considered in this post tagged Parentheses and Brackets – Definitions, Uses with Examples has offered some explanations about this marks which some use interchangeably. I am certain you have gained some useful knowledge.