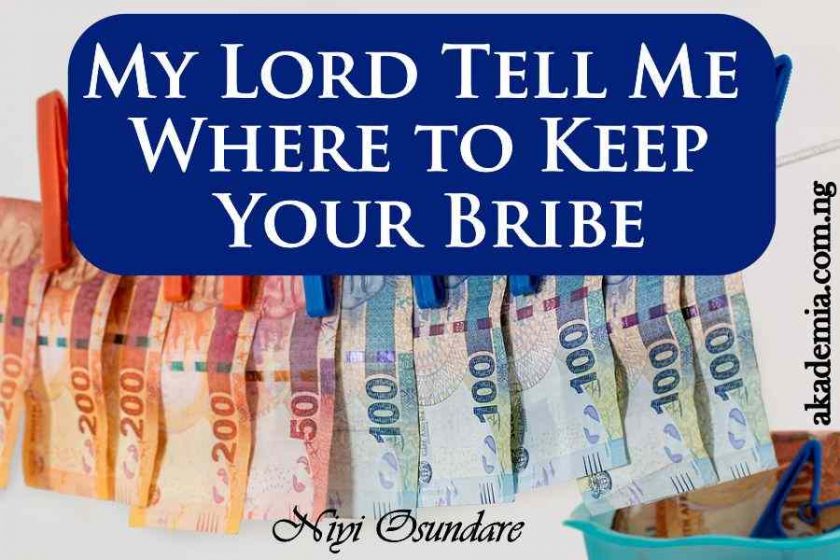 My Lord Tell Me Where to Keep Your Bribe

A poem by the renowned Nigerian poet, Niyi Osundare

My Lord Tell Me Where to Keep Your Bribe by Niyi Osundare was a poem published in October 2016. It is sad; but it certainly it fits the present reality in our nation Nigeria.

The poem is a 24-stanza satirical reaction to the shocking discovery of some Nigerian judges’ involvement in corruption in October 2016. The judiciary, of which judges are principal agents, is believed to be the last hope of the common man. Judges are expected to be unbiased, fair and just in the discharge of their duties.

The Nigerian public was therefore astonished about the newspaper reports of allegations of corruption and particularly with evidence-based reports of illicit keeping of huge amounts of ill-gotten money in hard and local currencies in roof-tops and other ridiculous non-banking places by the judges.

Each of the cases was promptly investigated and the judges involved were being prosecuted in the courts of law. Though the shocking discovery was greeted by reactions on the print and electronic media, Niyi Osundare’s satirical poem was the first literary reaction. The poem was published after few days of the press reports, and it was widely circulated on the social media.

The poet’s thematic pre-occupation is the satirisation of Nigerian judges, their deep involvement in corruption and subversion of justice, the ridiculous places they keep ill-gotten wealth, and the enormous enervating effect of biased judgements and corrupt judiciary on national development.

Please tell me where to keep your bribe?

Do I drop it in your venerable chambers

Or carry the heavy booty to your immaculate mansion

Shall I bury it in the capacious water tank

In your well laundered backyard

Or will it breathe better in the septic tank

Since money can deodorize the smelliest crime

Shall I haul it up the attic

Between the ceiling and your lofty roof

Or shall I conjure the walls to open up

And swallow this sudden bounty from your honest labour

Shall I give a billion to each of your paramours

The black, the light, the Fanta-yellow

They will surely know how to keep the loot

In places too remote for the sniffing dog

Or shall I use the particulars

Of your anonymous maidservants and manservants

With their names on overflowing bank accounts

Shall I haul it all to your village

In the valley behind seven mountains

Where potholes swallow up the hugest jeep

And Penury leaves a scar on every house

It will take the fastest machine

Many, many days to count this booty; and lucky bank bosses

May help themselves to a fraction of the loot

The “last hope of the common man”

Has become the last bastion of the criminally rich

A terrible plague bestrides the land

Behind the antiquated wig

And the slavish glove

The penguin gown and the obfuscating jargon

Is a rot and riot whose stench is choking the land

Behind the rituals and roted rigmaroles

Behind the prim-and-proper costumes of masquerades

For sale to the highest bidder

Protect the criminal, enshrine the crime

All hail our buyable Bench and conniving Bar

A million dollars in Their Lordship’s bedroom

A million euros in the parlor closet

Countless naira beneath the kitchen sink

Our courts are fast running out of Ghana-must-go’s*

The “Temple of Justice”

Is broken in every brick

The roof is roundly perforated

By termites of graft

Judges doze in the courtroom

Having spent all night, counting money and various “gifts”

And the Chief Justice looks on with tired eyes

As Corruption usurps his gavel.

Crime pays in this country

Corruption has its handsome rewards

Just one judgement sold to the richest bidder

Will catapult Judge & Lawyer to the Billionaires’ Club

The Law, they say, is an ass

But the Law in Nigeria is a vulture

Fat on the cash-and-carry carrion of murdered Conscience

They kill our trust in the common good

These Monsters of Mammon in their garish gowns

Where jobbers are judges

Where Impunity walks the streets

Come Sunday, they troop to the church

Friday, they mouth their mantra in pious mosques

But they pervert Justice all week long

And dig us deeper into the hellish hole

Nigeria is a huge corpse

With milling maggots on its wretched hulk

For the endless decomposition of our common soul

My Most Honourable Lord

Just tell me where to keep your bribe.

** They declare the innocent guilty

They pronounce the guilty innocent