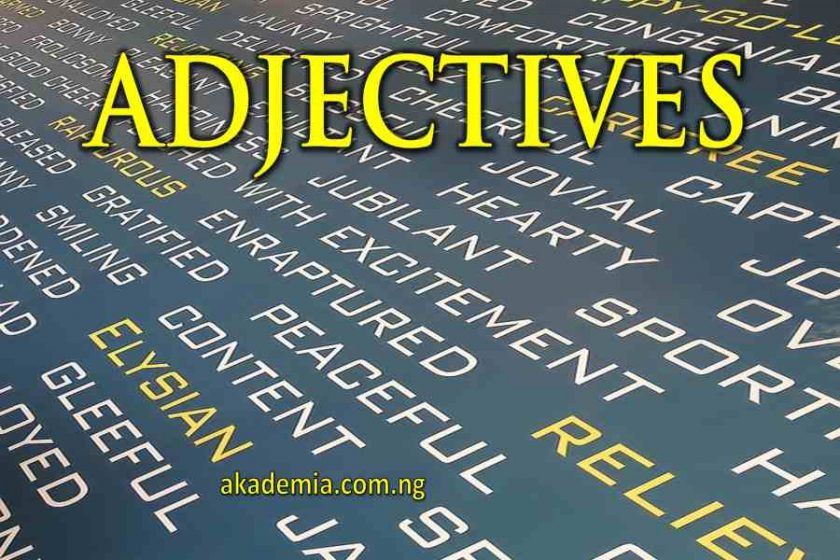 Hello dear reader, I am quite sure you have heard about Adjectives. But let me show you, by this post, 5 Things to Know about English Adjectives. Here we go…

What is an Adjective?

Adjectives are words that describe or give more information about nouns or pronouns in a sentence. In other words, adjective describes the quality of nouns or pronouns in a sentence. Adjectives limit the words they describe in some way by making them more specific. For instance, the addition of ‘green’ to ‘car’ limits ‘car’ since it excludes any other car by any other colour.

Recognition or Formation of Adjectives

We can recognise or form Adjectives in various ways:

Through adjectives suffixes such as:

Adjectives formed from Other Adjectives

If It Comes Before the Noun

If It Comes After the Noun

An adjective that comes after the noun qualifies or post-modifies the noun; hence the name ‘post-modifiers’. Examples include:

When we use each of the adjectives in the examples above as modifiers or pre-modifiers, the sentences read as follow:

Adjectives can also function as nouns. Consider these examples:

In this case, the verb that accompanies this is usually a Plural Verb.

There are different types of adjectives that are worth examining. They include the following:

Non-gradable adjectives are those that cannot accommodate the comparative and the superlative forms. Examples of such adjectives include: supreme, beautiful, reasonable, handsome, etc.

These types are similar to Demonstrative Pronouns. Read more here.

The degree of Adjectives can be in three forms; the positive, the comparative and the superlative.

This is the absolute form or the adjective itself. This is the first degree. Examples include: short, tall, fat, slim, gentle, clever, candid, intelligent, etc.

The Comparative is the second degree of the adjective formed with the addition of the ‘-er’ to the positive form for adjectives that can be inflected and attachment of ‘more’ to adjectives that cannot be inflected; for instance; more realistic, more tactful, more brilliant, etc. The correct form that we can inflect is largely an issue of length. Monosyllabic adjectives such as: loud, short, tall, slim, etc. add ‘-er’ to become louder, shorter, taller, slimmer, etc. Adjectives with two syllables have both forms as a possibility as in gentler/more gentle, cleverer/more cleverer, etc. Adjectives with three or more syllables usually form their comparatives with the addition of ‘more’. Note that we cannot use the two forms of the comparative (‘-er’ and ‘more’) together on an adjective. To say, ‘more better’ or ‘more shorter’ is ungrammatical. We use the comparative when it involves two people or groups. E. g.

The superlative form is the third degree of the adjective and it is usually formed with the addition of the ‘-est’ to the positive form of the adjectives that can be inflected and the use of ‘most’ to adjectives that cannot be inflected; for instance; most elegant, most ideal, most level-headed, most intelligent, etc. Unlike it is in the case of comparative, three or more entities are involved and the superlative (‘-est’ and ‘most’) and cannot be used together on an adjective. It is wrong to say, ‘most best’ or ‘most shortest’.

In addition, it is good to note that some adjectives are irregular in both their comparative and superlative forms, e. g.

It is only if they begin with ‘un’ that they are likely to end in ‘-er’ or ‘est’ as in ‘untrustworthier/untrustworthiest’.

Some adjectives, by their very definitions, do not normally have a comparative form. They are always in the superlative e. g. unique, best, utmost, optimum, optimal, etc.

Read more on other Parts of Speech.