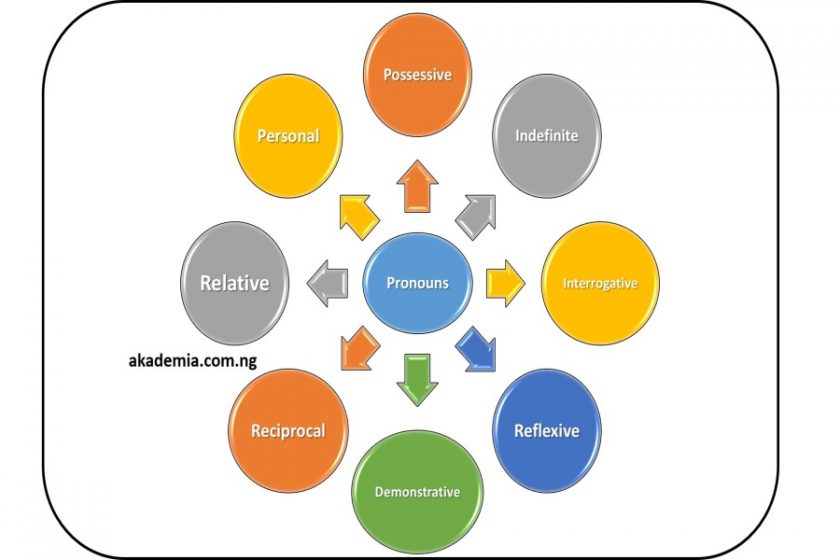 I welcome you to this post on pronouns. We have seen what Parts of Speech are but here we want to answer the question: What is a Pronoun? In answering the question, we will consider the definition of a pronoun, its different types, the functions of pronouns and we will provide illustrative examples for the purpose of clarity.

Kindly watch the lecture on Pronoun on our YouTube channel, Akademia EduConsult.

As a Subject of the Sentence

As Object of the Sentence

These refer to the persons speaking at a particular time. We have the first, second and third persons. The table below explains the persons in their forms:

These show possession and they have various forms. The ones that function as adjectives are called “Pronominal Adjectives”.

A pronoun can function as a modifier and modifiers are adjectives. A modifier is a word, phrase or clause that gives more information, changes or enhances the meaning of another word in a sentence, usually the noun headword.

Examples of possessive pronouns are shown in the table below:

They are pronouns that end in “self” or “selves” and which refer back to a noun or pronoun that has occurred earlier in the same sentence. Examples include:

They are also referred to as Emphatic Pronouns because they are sometimes used for emphasis. Consider these examples:

In addition, Reflexive Pronouns are used to indicate that something or someone is alone. For example:

These are pronouns used when the action expressed by the verb is shared by the parties concerned. In other words, Reciprocal Pronouns are used to convey the idea of reciprocity or a two-way relationship. Reciprocal Pronouns are ‘each other’ and ‘one another’. The former is usually associated with two people while the latter is associated with more than two people, but this rule is not rigid. Check the examples below:

These are pronouns that point to specific persons, places or things. They are four (4) in number and they have singular and plural forms. They are: ‘this’, ‘that’, ‘these’, and ‘those’. These four pronouns should not be confused with ‘Demonstrative Adjectives/Determiners’ which are used to indicate things or people in relation to the speaker or writer in space or time. In this context, ‘this’ and ‘these’ indicate nearness to the speaker while ‘that’ and ‘those ’indicate the distance from the speaker. Demonstrative Pronouns are similar to ‘Demonstrative Determiners/Adjectives’ except that they stand alone as nouns rather than preceding nouns. Look at these examples:

These pronoun types are used to ask questions. They include: who, whose, what, which and whom. Consider these examples:

These are pronouns that introduce relative or adjectival clauses in a sentence. A relative clause is a subordinate clause that has the function of an adjective. It qualifies or gives more information about a specific noun in a sentence. A Relative Pronoun, therefore, acts as the subject in the subordinate clause. The Relative Pronouns are: who, whom, whose, that and which. See these examples:

Relative Pronouns refer back to a noun, or noun phrase in the main clause. We refer to these nouns and noun phrases as antecedents. ‘man’, ‘lady’, ‘boy’, ‘car’, and ‘bid’ are antecedents in the examples above.

Indefinite Pronouns are pronouns that refer to things or persons generally and are not specific as to who or what they are exactly. Examples of Indefinite Pronouns include: any, anybody, anyone, anything, anywhere, some, somebody, someone, something, somewhere, none, nobody, no one, nothing, nowhere, few, little, many, several, each, etc.

In English, Indefinite Pronouns usually go along with the singular form of the verb in sentences in which they occur. See the post on Concord for more. Thank you for reading through this post. Kindly connect with us on our Social Media Platforms and remember to share this post with your friends.