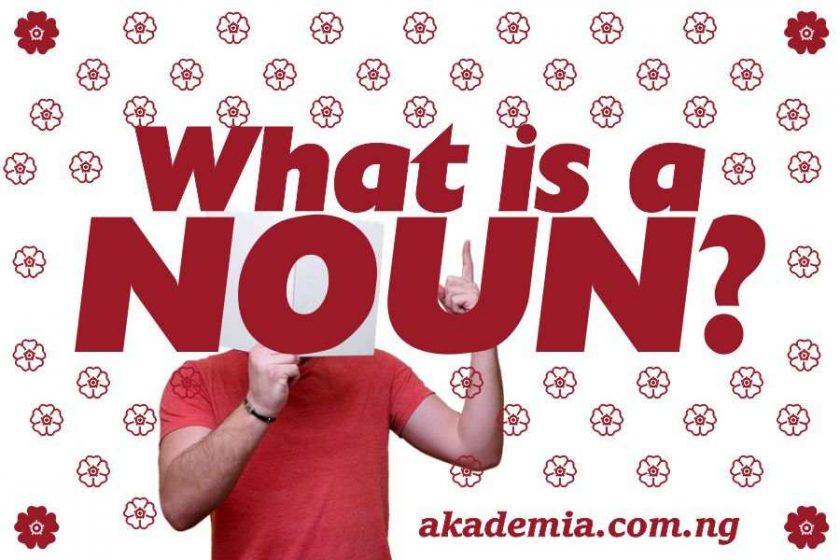 Welcome to this learning platform where we shall learn about nouns. What is a noun, you may ask? Well, there are various ways in which people construe nouns. But let us see some descriptions. You can see the video lesson of this post on ‘what is a noun?’ Kindly subscribe to our YouTube Channel.

What is a Noun?

In a layman’s term, a noun is generally a name, a content word that is used to refer to anything; a name tag or a label by which something is known; that is, a signifying word.

The definition above virtually describes what a noun is; but you need to know in details, for proper understanding, other ways by which a noun can be easily identified.

Now follow me as I take you on step by step…

Grammatical Category of a Noun

A noun belongs to the grammatical category of words commonly referred to as Parts of Speech or Word Classes. A noun has been generally defined as the name of persons, places, animals or things. You must have used this definition at one time or the other. It could even be the only definition of a noun you know. Never bother, this is very true but there are numerous words that do not belong to any of these categories and they are still classified as nouns. Therefore, the definition of noun as the name of any person, place, animal or thing does not completely capture what a noun is.

Description of a Noun

So then, what is a noun? Rather than provide an overarching definition of a noun or a one-size-fits-all definition, it is expedient to describe a noun by what it does or how it appears – by its form and function. In other words, we will adopt a descriptive perspective to explaining the concept of a noun rather than a prescriptive approach which simply prescribes or defines. There are various ways to describe what a noun is:

A noun is generally a name

Whatever you can think of that has a name is a noun. It is a content word that can be used to refer to anything: a person, a place, a thing, an animal, a concept, a quality, an idea, a feeling, a doctrine, a theory, an ideology, a state, etc. It can be a name tag for places, natural occurrences or disasters, persons, institutions, organisations, rivers, mountains, lakes, islands, continents, countries, states, districts, wards, areas, villages, cities, towns, hamlets, settlements, communities, oceans, seas, books, etc. or a label by which something is known; that is, a noun could be seen as what signifies anything – a signifier.

A noun is usually preceded by the article

A’, ‘AN’ or ‘THE’: This is another way to identify what a noun is. Just insert the article ‘a’ before it if it begins with a consonant and ‘an’ if it begins with a vowel. This is usually applicable to count nouns. Some words are nouns, but it is only the article ‘the’ that can precede them, especially non-count nouns. Once you do this and it makes sense, then what you have is a noun.

A noun is usually modified, qualified or described by adjectives

When you have a word an adjective precedes, the word is most likely a noun. Adjectives usually describe qualities possessed by other words. In some cases, a word that is naturally an adjectives could become a noun based on its functions or usage. Consider this example:

‘Rich’ in this example is traditionally an adjective while the word ‘people’, preceded by the adjective ‘rich’, is a noun. Having established this, look at yet another example in which a natural adjective is made to function as a noun:

Based on usage or function, a traditional adjective has been made to function as a noun. This is also a way of identifying a noun. Consider another example:

(‘Great’ as used above is an adjective)

(‘Great’ as used here is a noun). Form and function are important concepts in identifying a noun.

A noun usually functions as the subject of a sentence

A sentence (the largest grammatical unit in the English Language) generally consists of a subject and the predicate. The subject is the actor, the performer or the initiator of the action in a sentence and it comes just before the verb in the sentence. The predicate consists of other grammatical elements in the sentence such as the verb, the object, the complement and the adverb or the adverbial. The subject of any sentence is usually a noun. Look at these examples:

A noun usually functions as the object of a sentence

It will be good at this point to mention the types of objects that a noun can be. First, there is the Direct object and the Indirect object.

In each of the three examples above, we have both the direct and indirect objects. Let us look at them closely:

In example (c), it is ‘a detached duplex’ that was designed (direct object) while ‘his mother’ is for whom the duplex was deigned (indirect object).

A noun usually functions as the complement of the subject

This is similar to a noun functioning as an object of the sentence but with a slight difference. When a noun functions as the complement of the subject, a linking verb, usually the ‘be’ form of the verb is usually involved rather than a transitive verb. Consider the following examples:

Note: Don’t forget that we did mention earlier that the subject of a sentence may not necessarily be made up of one word; it could be a string of words. But that no matter the number of words a subject contains, it still serves as the subject of the sentence. This is also applicable to a noun serving as the complement of the subject; it could consist of strings of words.

A noun usually functions as the complement of the object

(The noun ‘Samson’ functions as the complement of the object ‘the man’).

(The noun phrase ‘the president’ serves as the complement of the object ‘Buhari’).

(The noun clause ‘whatever she deserves’ functions as the complement of the object ‘the girl’).

A noun also functions as the complement of the preposition

We can also identify a noun by its function as the complement of the preposition. This can be demonstrated in the following examples:

(The noun ‘hours’ serves as the complement of the preposition ‘for’)

(‘the roads’ is a noun phrase which functions as the complement of the preposition ‘about’).

(The preposition ‘on’ has the noun clause ‘who should lead the song’ as its complement).

Having followed our discussion on the various ways by which one can identify a noun, let us now take a look at the different types of nouns that exist.

There are various types of noun which include: Proper, Common, Count, Non-Count, Concrete/Material, Abstract, Collective, Verbal, Possessive, etc. I have provided detailed explanations on each of these types of noun in another post. (See Types of Nouns). You can also check out nouns and their plural forms.