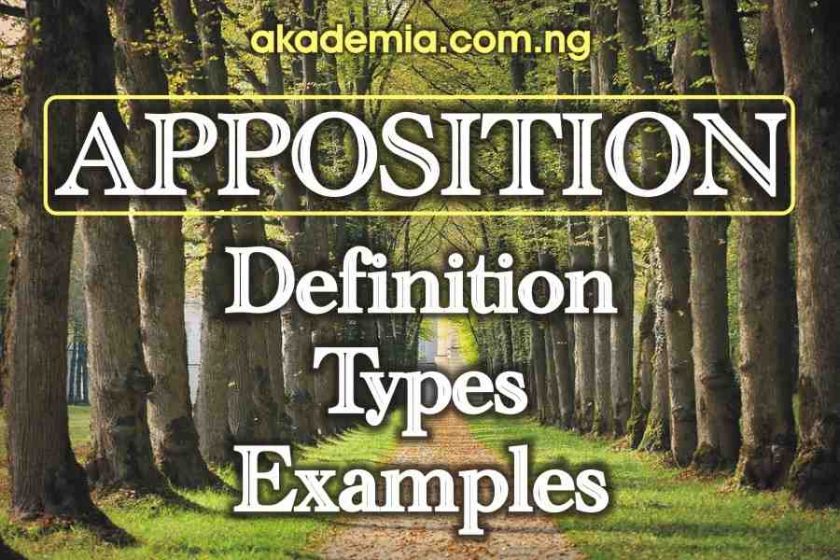 It is good to know you are here again to learn something new which I have titled: What is Apposition? Definition, Types and Examples. I am sure you make use of this grammatical concept almost all the time without knowing what we call it. In this post, I will take you through the definition of Apposition with copious examples; I will also show you the types of Apposition we have in English and finally the semantic implication of Apposition.

What is Apposition? Definition, Types and Examples

Let us start by looking at the different definitions of Apposition…

I want to believe there have been instances in which you have had to describe a person, a concept or a thing in another way in the same sentence for the purpose of clarity, emphasis or for the purpose of providing more information. If you have done this, then you have made use of Apposition. What then is Apposition?

Geoffrey Leech defines Apposition as: ‘a relation between two constituents such that the following statements normally apply:

Let us exemplify what we have said so far…

In the examples given above, the following elements are appositives; you can also refer to each of them as an appositional phrase:

Let me quickly inform you that the term ‘appositive’, is the grammatical description of words or phrases that refer to the same person or thing and have the same relationship to other sentence elements.

Leech also submits that we could also term an ‘of-phrase’, that is, a phrase ‘in which ‘of’ links co-referential expressions’ as appositive. Examples of such phrase include:

There are certain phrases or linguistic items that indicate apposition; we can also call such items ‘markers of apposition’. They include the following:

The list is not limited to the phrases above; there are many other phrases of reformulation which are indicators or markers of Apposition. Let us look at the different types of Apposition we have in English…

In the Restrictive Apposition, the second appositive is part of the first (a necessary part) appositive. In other words, it serves as a qualifier of the first appositive. Let us exemplify this with the following sentences:

Basic Manifestations of the Restrictive Apposition

A situation in which the first appositive is the more general expression and is preceded by a definite article, determiner or definite modifier.

The second appositive is preceded by a determiner and is more general than the first appositive.

This manifestation is like the first one but with the omission of a determiner.

In the case of Non-Restrictive Apposition, the second appositive marked by comma is not necessarily part of the first appositive; rather, it provides information on it. Let look at some examples:

Semantic Implication of the Non-Restrictive Apposition

The Non-Restrictive Apposition has some implications when it comes to the meaning it conveys. We shall discuss these semantic implications under three headings which are Equivalence, Attribution and Inclusion. Let us look at these, one after the other beginning with the first implication which is that of…

Talking about equivalence, what does it mean? It simply means the second appositive is equivalent to the first one. Look at this illustration:

In the case of attribution, the second appositive is a quality of the first one. Consider these examples:

We make use of Appositions very frequently and it is important to understand its meaning, structure and types. This post has done just that and I am sure you have learnt something tangible. Check out some other posts on this site for your information and education. I hope to hear from you as well; send in your comments and questions.