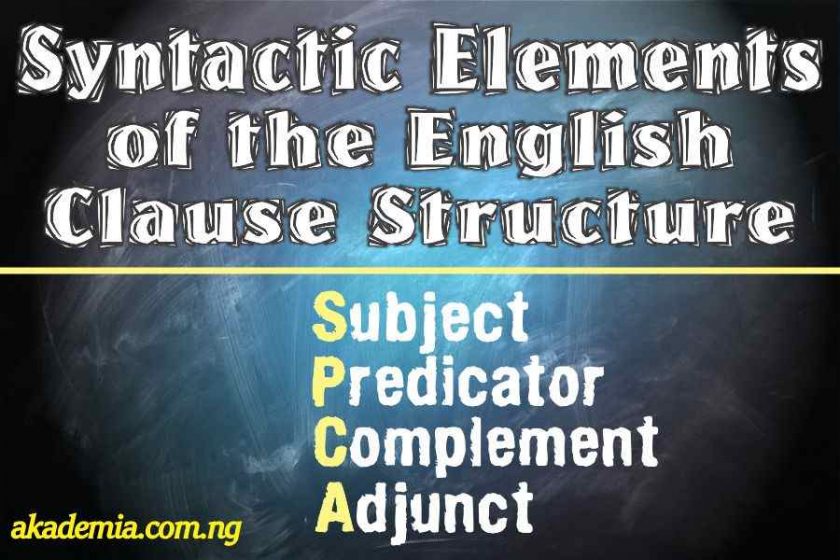 Welcome to class! Today’s discussion promises to be educative and interesting. If you are familiar with my posts, you will recall that I have made references to the English Rankscale which has the clause as one of its members. This post, Syntactic Elements of the Clause Structure in English, focuses, at a micro level, on those items that make up the clause or sentence structure. You are right to refer to a simple sentence as a clause. So both are used interchangeably.

Syntactic Elements of the Clause Structure in English

There are four (4) elements that make up the English clause and we refer to them as the Elements of clause structure. In other words, a clause in English has four (4) structural or syntactic elements and they are the maximum a clause can have.  Let us see the list of these four structural elements and proceed to discuss each one of them in details with illustrative examples. They are:

There is need to state here that there are various models of grammar. See the post, What is Grammar? for more clarifications. The model of grammar we subscribe to is the Systemic Functional Grammar (SFG) which has M. A. K. Halliday and others as its proponents. In the description of the structural elements of the clause, we have adopted the SFG model, that is: (S), P, (C), (A). For the traditional grammarians, they classify the elements of the clause as follows:

Description of Structural Elements of the Clause

Let us take each one of these structural elements and discuss them further:

The subject is usually the first element in a clause, if we go by the basic patterns of the simple sentence. The subject is the performer or initiator of an action which the verb describes in a clause or sentence. It is the agent and it acts on the object. It is the element of a clause or simple sentence which normally comes before the predicator or Verbal group and consists of a noun phrase. In other words, in the subject, there is a nominal group. Usually, the subject normally consists of any of the following items:

Note that the subject must always be in agreement with the verb and the complement in any given sentence. See the extensive discussion on Concord.

This is an important structural element of a clause or simple sentence. It usually comes after the subject and characteristically precedes the complement. The predicator comprises the operator, which is the first auxiliary verb or the finite verb ‘be’, a verb or verbal group, the non-finite part of the verb phrase plus other elements relating to it like the negation, the catenative, and the particle. It is in the predicator or the verbal group that we realise both tense and aspect. See The English Verbal Group. See the following sentences that show the predicator:

It is important to note that if the only predicator in a sentence is an auxiliary verb, we reckon it as a lexical verb! For example:

Note also that we can modify the lone auxiliary verb that has assumed the status of a lexical verb with a modal auxiliary. Take a look at these examples both in the finite and non-finite forms:

The complement has some features similar to the subject in the sense that the nominal group operates under both. The complement comprises the following:

It is essential to state that there are two types of complements. These are:

Let us take a look at each of them…

The complement intensive usually makes reference or expresses a relation to another element in the sentence or clause structure. The element is usually the subject or the complement.

There is the concept of ‘Double Complementation’ which we should examine. It simply has to do with the presence of more than one complement in a clause structure. For example:

The Traditional Grammarians refer to this as a direct or indirect object.

We have items like: this morning, last year, last semester, often, very slowly or quickly, down the road, after the service etc. This position is occupied by the adverbial group. I have put together a comprehensive post on the Adverbial Group in English. Do check it out. I have also written on adjuncts and related concepts extensively in the post Types of Adverbs. Make sure you look it up.

It is important to state that of all these structural elements of the clause, the only obligatory element is the predicator. All others, the subject, the complement and the adjunct are optional! Let us consider some sentences to demonstrate the obligatory nature of the predicator and the optionality of other elements:

It has been an interesting discourse so far. Hasn’t it? The discussion on the English Clause will be incomplete if we do not discuss Types of Clauses in English. Check out the post and please endeavour to drop your comments on every post you read! The feedback is important! Thank you so much for reading this post. I am sure you are better for it! Great