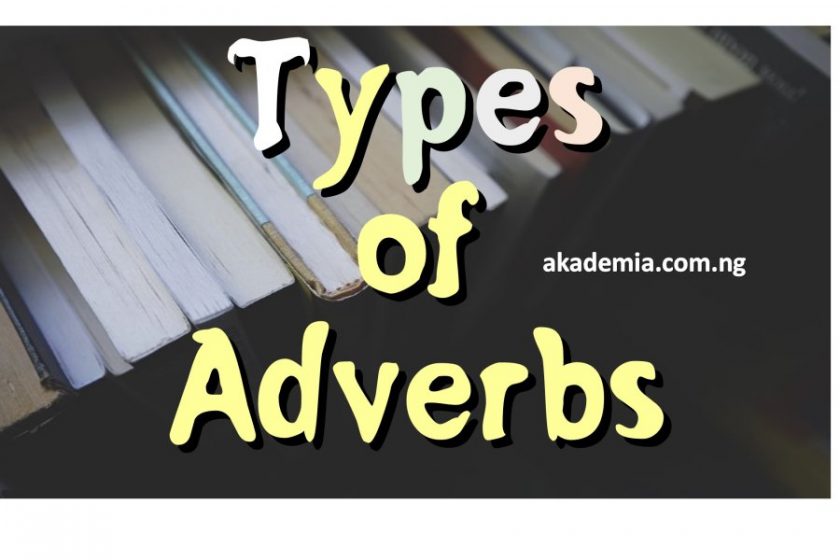 There are three (3) major types of Adverbs which some refer to as classes of adverbs. They include:

An adjunct is an adverb that is integrated into the structure of the sentence; it is usually part and parcel of the sentence. Consider these examples:

Note: ‘quickly’ can be placed anywhere in the sentence; it extends the fortune of the verb “ran out”.

A disjunct is an adverb that is not integrated into the structure of the sentence and it normally expresses an attitude or viewpoint of the speaker. Examples:

Note: Disjuncts are normally separated by a comma.

There are two types of disjuncts: Attitudinal Disjunct and Style Disjunct. Let us look closely these two types:

This is a comment that is expressed on the content of the communication; the disjunct is on the meaning of the sentence – content. Let us look at some examples:

This conveys the speaker’s comment or the form of what he is saying. It expresses the condition under which he is speaking – his own personal comment. See these examples:

Conjuncts perform connective functions. They join or connect two phrases, clauses or sentences. Two types of conjuncts are listed below:

These indicate the listing of what is being said. E. g. first, secondly, furthermore, finally, more importantly, etc.

These indicate additional relationship which can be reinforcing or equative.

Examples of this include: also, furthermore, moreover, in addition, above all, what is more, etc.

These introduce new stage in the sequence of thought. E. g. now, with reference to, with regard to, with respect to, etc.

These conjuncts sum up what precedes them. E. g. in brief, in all, in conclusion, etc.

These conjuncts express the consequence or result of what was said before. Examples include: so, as a result, etc.

These are also referred to as antithetical conjuncts. They express the contrast or oppositeness between sentences. Examples include: on the other hand, on the contrary, to the contrary, contrariwise, etc.

These conjuncts express the unexpected or surprising nature of what is being said in view of what was said before. Examples include: however, still, besides, etc.

These Special Adverbs are peculiar in their usage in sentences in which they occur. They include: hardly, barely, scarcely and no sooner. We usually use the first three with “when” while we use the last one with “than” because of the comparative element it contains. See these examples:

You can read on What is an Adverb and Do All Adverbs End in ‘ly’? Do not forget to share this post!