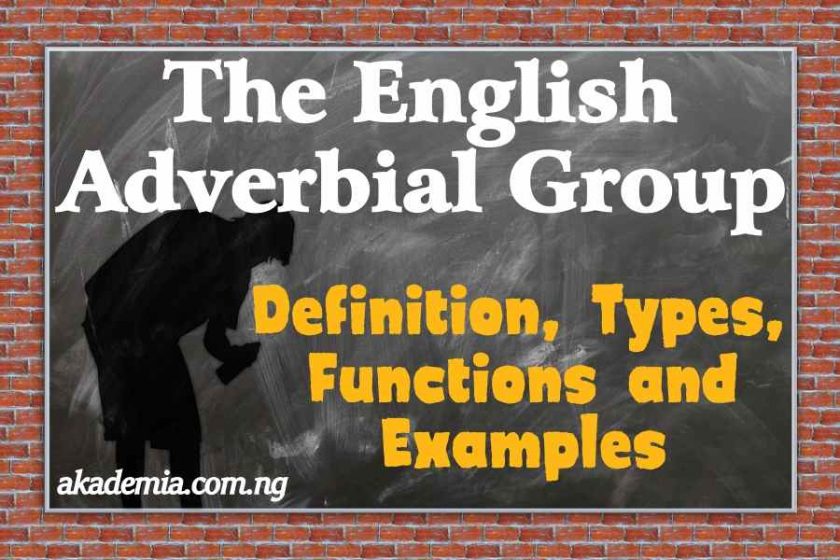 This post discusses The English Adverbial Group: Types, Functions and Examples. An adverbial group performs the same function as an adverb in a sentence. It usually expresses the contingent details about the verbal group such as time, place, manner, etc. The headword in an adverbial group is an adverb and it has other elements that modifier or qualifiers it. The adverbial group has its location under the adjunct.

In English, there are two types of the adverbial group. They are:

Let us consider each of these adverbial groups…

This has a preposition as its headword. Take note that when prepositions stand alone, we refer to them as adjuncts. The structure of the preposition-headed adverbial group comprises a prepend (p) and a completive (c). The prepend is the preposition while the completive consists of a nominal group or a noun phrase which could also be a single noun or a pronoun depending on the sentence. See the following examples:

When an adverbial element comes before the prepend, we refer to such as ‘before preposition’ element; that is (b) (p) (c). E. g.

The Structure of the Adverb-headed Adverbial Group

The structure of the adverb-headed adverbial group is (t), a, (l); where ‘t’ stands for ‘temperer’, a represents ‘apex’ and ‘l’ stands for the limiter. Note that both ‘temperer’ and ‘limiter’ are optional just like the modifier and qualifier in the nominal group are. The obligatory element in the adverb-headed adverbial group is the ‘apex’. Let us see some sentences to demonstrate this.

Syntactic Function of the Adverbial Group

An adverbial group can modify an adjective in a sentence. Consider these examples:

Adverbials on the Clause Level/Adjunct

Adverbial groups serve as adverbials or function as adjuncts in a sentence. See these examples:

Pre and Post-modifier in a Nominal Group

Adverbials can modify or post-modify (qualify) a headword in a nominal group. Consider the following:

Adverbial groups serve as a complement to prepositions. See the following examples:

There are other groups in English which I have explained in other posts. See Nominal group and Verbal Group. Share these educative posts with your friends. Thank you. Do not forget to drop your comments.