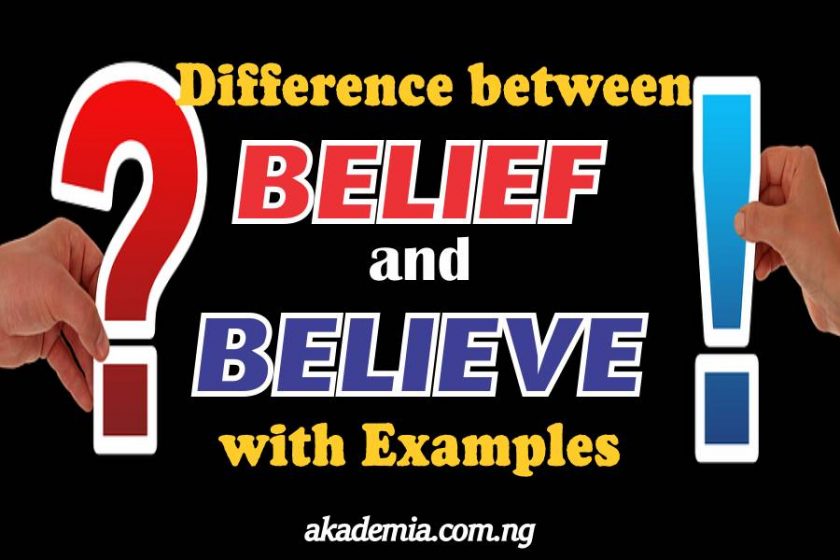 There will always be confusion in many people’s mind as far as the use of certain words in English is concerned. The reason is not far-fetched. Some words share many linguistic features. Some are homonymous, some are homographic while others homophonic. One of the pairs that many cannot identify and differentiate easily is the pair: Belief and Believe. I have, therefore, put this post, Difference between Belief and Believe with Examples together to shed light on this confusing pair of words. See also Affect vs Effect.

Difference between Belief and Believe with Examples

Many people mix up these two words. One is a Noun while the other is a Verb. Let us see the differences.

Belief is a noun. It means acceptance by the mind that something is true or real.

It also means trust or confidence that somebody or something is good or will be effective. E. g.

Belief also represents a statement, principle, or doctrine that a person or group accepts as true; an opinion, especially a firm one; and it also means religious faith, that is, faith in God or in a religion’s gods. E. g.

Believe, on the other hand, is a transitive verb that which means to accept that something is true or real. For instance:

It also means the following:

Receive someone as honest and truthful. For instance:

Admit that somebody or something has a particular quality or capacity

Think that something exists; be of the opinion that something is a reality, especially when there is no outright proof of its existence or reality. E. g.

Trust or be confident that somebody or something is worthwhile or effective. E. g.

Have religious faith; a belief in God or in a religion’s gods. E. g.

Difference between Belief and Believe with Examples

Having seen the definitions of both words, how then do we differentiate between them and use them correctly? The following tips will certainly help:

If you cannot successfully put a verb in the place of any of the words and it is grammatically correct and makes sense, then what you should use is Believe! If on the other hand, you use a noun in the stead of any of these two words and it is grammatically correct and semantically meaningful, then you are dealing with Belief! I hope this helps. Good. Check out our post on Academia vs Academic, Affect vs Effect. See also Correct Usage: Access, Assess, Accent, Ascent and Assent.