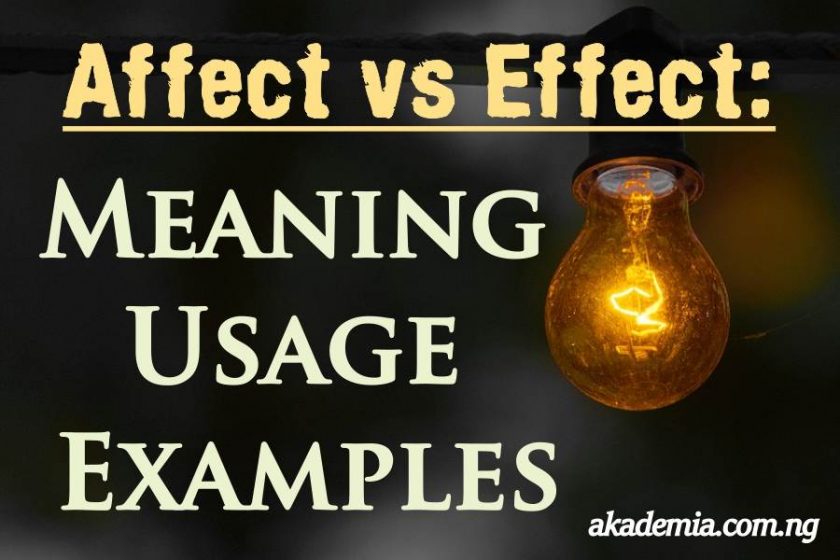 One of the Categories in Akademia is the Common Errors Category. There, there are several posts dedicated to explaining words in English that users find confusing. This particular post, Affect vs Effect: Meaning, Usage and Examples, falls under the category of commonly confused words. Most of the words in English have similar sounds, spellings but different meanings, see Homonyms.

Homophones are words with same sounds but different spellings and meanings while others have same spellings, different meanings and sounds and we refer to them as Homographs. Without a proper understanding of Parts of Speech in English, there will always be a confusion when dealing with these similar or related words.

In this post, we will take a look at ‘Affect’ and ‘Effect’ as a pair in the long list of closely related words which have the tendency to confuse their users. We will start by defining each one, then we will explain how we use each word with illustrative examples for proper comprehension. Shall we begin?

This is both a verb and a noun. As a Verb, it means to produce a change in or influence something; it also means to have an effect upon, influence, bear on, bear upon, impact, touch, touch on, alter, change, modify, etc.

Let us get some examples:

It also means to act physically on or have an effect upon, as in:

As a noun, it means the conscious subjective aspect of feeling or emotion; it also means a feeling.

As a noun, Effect refers to a phenomenon that follows and is caused by some previous phenomenon. For instance:

It is also an event that means a change that occurred. Example:

Usually, in the plural, effect also means movable property or goods as in:

Effect also means ‘the quality or state of being operative’ that is, what is operational. E. g.

As a verb, Effect means ‘to produce’ as in:

Other meanings include: effectuate, set up, cause, do, engender, make, accelerate, accomplish, carry out, carry through, draw, execute, fulfil, get, hasten, induce, precipitate, rush, serve, speed up, stimulate, etc. We also use this word to mean ‘act so as to bring into existence’ as in:

What causes confusion is that both Affect and Effect have very similar pronunciations and closely related meanings. If one thing affects (acts upon) another, it has an effect on it (causes it to change). Note that you can affect (cause a change in) people as well as things, but you can only effect (bring about) things such as changes. For example:

Effect is also used in some phrasal expressions like:

In effect means ‘in substance’ or virtually. It indicates that what someone said represents the truth of the matter, even though the words may be other than what other people would choose. For example:

To the effect/to that effect

This phrase means ‘with the meaning’ or an indication of approximately the same meaning as in:

There are some universally accepted and commonly used words with effect in which they become an adjectival Phrase like the following:

I hope you have learnt something substantial in this post. Recommend these other posts to your friends and family: