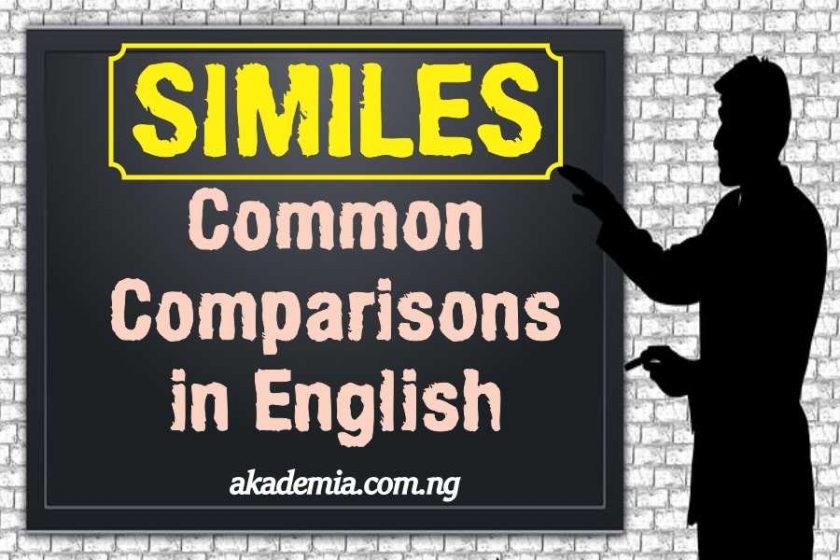 Have you tried to compare two things before and you find yourself at a loss for what to say? Then this post, Similes: Common Comparisons in English, will certainly be of help of help to you. A simile is one of the numerous figures of speech in English. Let us define what a figure of speech is and also describe the concept of simile.

Figure of Speech: A Definition

Let me give you two definition classic definitions that will clearly explain what a figure of speech is. They are

“An expression that departs from the accepted literal sense or from the normal order of words, or in which an emphasis is produced by patterns of sound. Such figurative language is an especially important resource of poetry, although not every poem will use it; it is also constantly present in all other kinds of speech and writing, even though it usually passes unnoticed.”

Peter Childs and Roger Fowler, in their edited Routledge Dictionary of Literary Terms, quoted George Puttenham’s definition of ‘figurative speech’ in his work, The Art of English Poesie, (1589) which goes thus:

“A novelty of language evidently (and yet not absurdly) estranged from the ordinary habit and manner of our daily talk and writing, and figure itself is a certain lively or good grace set upon words, speeches, and sentences to some purpose and not in vain, giving them ornament or efficacy by many manner of alterations in shape, in sound, and also in sense, sometime by way of surplusage, sometime by defect, sometime by disorder, or mutation, and also by putting into our speeches more pith and substance, subtlety, quickness, efficacy, or moderation, in this or that sort tuning and tempering them, by amplification, abridgement, opening, closing, enforcing, meekening, or otherwise disposing them to the best purpose.”

A simile is one of the most popular figures of speech in English. Etymologically, the word ‘simile’ derives from the Latin word, similis which means like. A simile, therefore, is a statement or an expression of comparison that contains the word ‘like’ or ‘as’. Consider these sentences:

There are conventionally common similes that are as old as the English language itself. They have existed in the public domain. There are some you are familiar with, and maybe there are some you do not know. Find below a list of eighty (80) of such similes…

Going through this list, you should not be at a loss anymore when you have to compare tow things. You can also check out my interesting post on the Collection of English Proverbs.