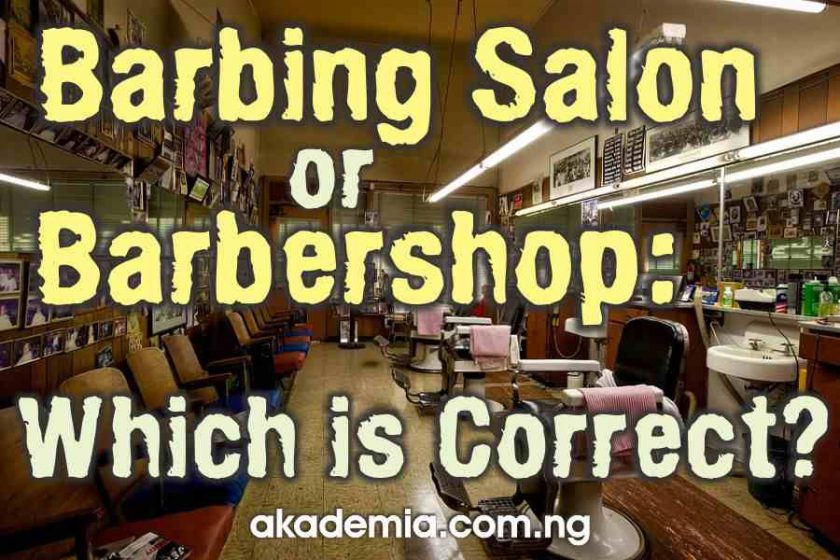 Welcome to this interesting post. I’m sure you are getting lots of helpful information on Akademia. This post, Barbing Salon or Barbershop: Which is Correct? expatiates on the correct form of how we describe the place the male folks get a haircut; I know some females visit there too. Almost everybody is guilty of using the wrong expression, ‘Barbing Salon’! It is not only incorrect, it is a complete misnomer.

Never mind that I did not say you have even made such statements countless times. Don’t be shocked that I said the expression ‘Barbing Salon’ is a misnomer. So how do we then say it in the correct form? Well, this is why you are reading this and we will get to that in a short while; just follow on.

Let us begin with the word ‘barb’. It will interest you that not one definition of the word directly refers to getting rid of hair on one’s head; though one of them relates to the ‘beard’ and the Latin word for that is Barba. Let us see some definitions…

As a noun, it means the following:

As a verb, it means to ‘fit something with barb, to provide with a barb or barbs’ and the adjective form is ‘barbed’.

Who then invented Barbing Salon?

I am certain that many questions would have popped up in your mind as you read the various definitions of the word ‘barb; and I deduce the uppermost one is: ‘How have we come to associate this word with the removal of hair on the head?’ Let us look at some possibilities!

We might have got this idea from the word ‘barber’ which simply refers to someone who cuts hair as a profession. It may then stand to reason that just as a teacher teaches, a writer writes and a singer sings, then a barber barbs. So we might have erroneously concluded that a barber is one who barbs! But the removal of the inflectional morpheme ‘-er’ does not yield the meaning ‘to cut the hair’ as the various definitions above show. So it is clear that ‘barbing’ has nothing to do with hair.

Another possible source is the word ‘salon’ which means, among other things, ‘a place for hairdressing or beauty treatments; that is, a commercial establishment where hairdressers or beauticians work, and sometimes part of a larger store or a hotel’. So it may not be wrong to say you want to visit the salon for a haircut since it is a place where the hair is ‘dressed’. So what then is the right way to describe ‘barbing salon’? It is simply ‘Barbershop’! Yes! That is simply it! Take note that it is one word and it means ‘the business place or premises of a barber’.

So do not say ‘barbing salon’, say ‘barbershop’! In addition, note that the action of cutting one’s hair, that is the verb, is ‘barber’. It would be wrong to say:

The right thing to say is:

It is not wrong however to say you want to get or have a haircut. What you get after barbering your hair is ‘haircut’. See the following:

But remember, to have a haircut, you must visit the salon or barbershop, not a barbing salon, where a barber will barber your hair. Isn’t it interesting!