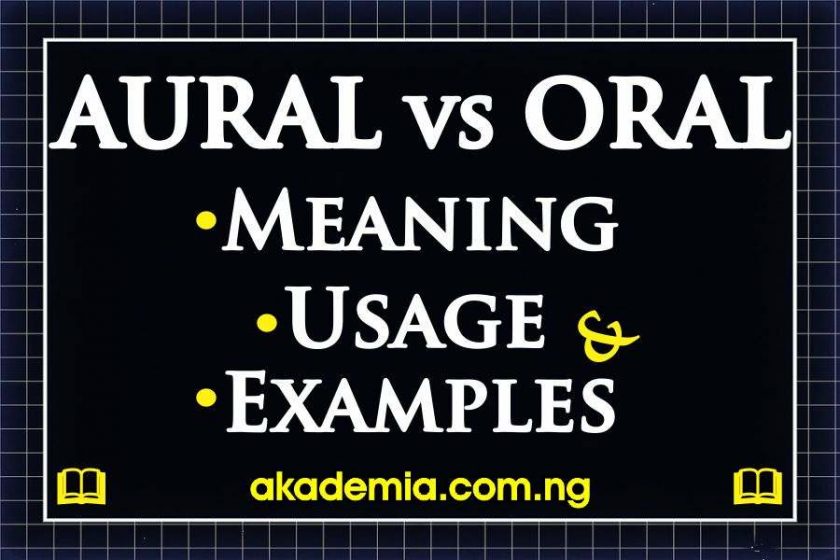 Most speakers of English, especially non-native speakers, confuse many words in English. The reason is not far-fetched: some of these words share certain similarities. For instance, some of these commonly confused words have similar sounds, some have similar spellings while some even have similar sounds, similar spellings but different meanings. (See Homonyms, Homophones and Homographs). The words ‘aural’ and ‘oral’ belong to this category and this post, ‘Aural vs Oral: Meaning, Usage and Examples’, addresses this confusion. Let us examine the two words closely…

Both words sound the same way and they belong to the category known as homophones. Let us check the meanings of each word and their usages with accompanying examples for clarifications.

Aural: A Definition and Explanation

Aural has to do with hearing or sound; that which relates to the ear or hearing. It means ‘of or pertaining to hearing or the ear’. It also refers to that which ‘relates to or is characterised by an aura’. I believe you know what ‘aura’, which is a noun, means; let me give you three meanings of aura right away…

Back to ‘aural’, it is an adjective and basically has to do with hearing. Let’s see some examples:

Oral: A Definition and Explanation

Oral, on the other hand, has to do with the mouth. As an adjective, it means ‘using speech (what is expressed in spoken form) rather than writing…of or relating to or affecting or for use in the mouth’. In anatomy, it means ‘of or involving the mouth or mouth region or the surface on which the mouth is located’; while in psychoanalysis, it refers to ‘a stage in psychosexual development when the child’s interest is concentrated in the mouth’. In phonetics, oral refers to the speech sounds that are produced by means of airstream that comes out from the mouth only with the sealing of the nasal cavity.

Let us see some examples accommodating the various meanings of the word ‘oral’ for easy comprehension.

In terms of test or examination, an aural test is one which tests comprehension by listening, while an oral test requires spoken answers rather than written answers.

We are also liable to confuse these two words which are very closely related if not synonymous. . Oral means ‘expressed in speech’, as in ‘an oral, rather than a written examination’. Verbal means ‘expressed or communicated in the form of words’ or ‘using words, especially spoken words, as opposed to pictures or physical action’, as in:

We also use ‘verbal’ to mean ‘relating to or formed from words in general, referring to the spoken word, expressed in speech’, ‘relating to or having facility in the use of words’ as in:

‘Verbal’ also means ‘of or relating to or formed from a verb’, as in:

Sometimes we gloss over some seemingly simple words only to find out that we do not know the nitty-gritty when it comes to using them appropriately. I am sure you will be able to properly use ‘aural’, ‘oral’ and ‘verbal’ correctly, having gone through this post. Do share with your friends. There are also other words that usually confuse us, I have put together some interesting posts on these words. Take time to check them out. See the following: