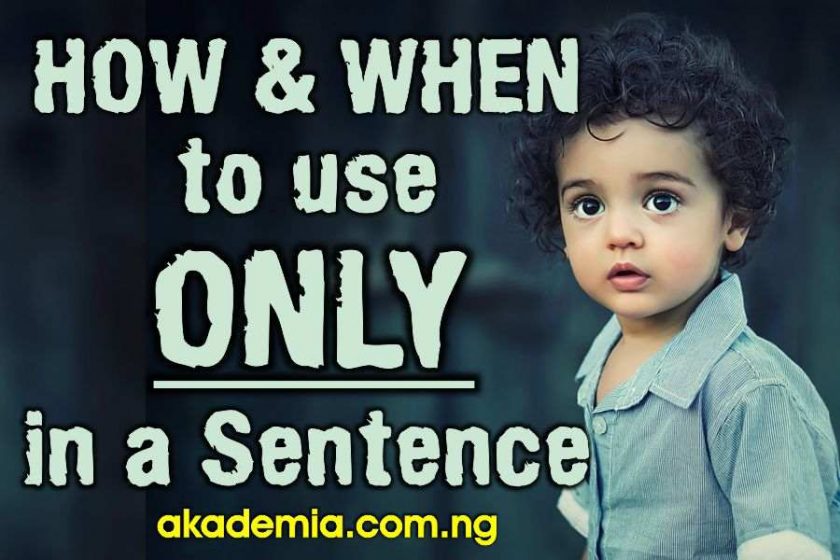 Many people grapple with language use or usage and are at a loss on how to use certain words in English. One of such words is the word: only. How and When to Use ‘Only’ in a Sentence is put together to deal with this challenge!

The Concept of Use and Usage

Constituent Elements of a Simple Sentence

We have to lay some foundations for a proper understanding of the topic at hand. ‘Only’ belongs to the Part of Speech known as Adverb. An adverb, or an adverbial, is part of the syntactic elements that make up a simple sentence. See Syntactic Elements of the Simple Sentence. We also refer to an adverbial as an adjunct. In another vein, ‘Only’ also belongs to the word class we know as Adjective. Adjectives modify a noun, pronoun or a noun phrase as the case may be; and ‘only’ can serve in this capacity.

Mobility of an Adjunct

Of all the elements that make up a clause or a simple sentence, the adverbial is the most mobile. What this means, in effect, is that it can appear at the initial position in a sentence, it can also be at the medial or at the final position.

Ubiquity of an Adjunct

An adjunct can also appear more in a sentence than any other element like the subject, predicator or complement. There can be more than one subject like compound or plural subject, we can have a verbal group comprising four verbs e. g. could have been found (See Aspects in English). We can have more than a complement or object, but the adjunct can appear more times in one sentence than any of these other syntactic elements of a simple sentence! Consider this example:

Adjunct: Once upon a time

Adjunct: in a little town

Complement: tax from the residents

How and When to Use ‘Only’ in a Sentence

As an Adverb, we can use ‘only’ to mean any of the following:

This is to show reference to one thing or person that is specifically involved in a situation. For example:

We use ‘only’ in this context to signify the condition that must be in place for something to happen or be true. For instance:

We also use ‘only’ to represent ‘merely’ which depicts ‘being nothing more than something specified’. For example:

No more and no less

That is, the exact amount specified. Examples of this include:

As recently as: considered as happening very recently

This is used to introduce a surprising or unpleasant event that happens immediately after the one mentioned. For example:

How and When to Use “Only” in a Sentence

As an Adjective, we can use ‘only’ to mean any of the following:

This is used to indicate the lone person or thing involved in a situation. For instance:

With no siblings; with no brothers or sisters

Only sometimes functions as a limiting adverb and consequently, we must avoid any form of ambiguity in its placement as its position in a sentence can determine the meaning of the whole sentence. Usually, as a rule, we put ‘only’ next to the word we want it to modify. For example:

Where to avoid putting only

We must avoid using ‘only’ between a subject and a verb and between an auxiliary verb and the main verb. Look at these examples:

The second and third sentences are more acceptable.

‘Only’ serves as modifier to a nominal group

‘Only’, as an adjective in this context, occurs in an environment where the nominal is also pre-modified by an article. Hence ‘only’ is either preceded by article ‘the’ or it is followed by any other article. For example:

This simply means that the person who will pass without class attendance must be a genius; and by implication, anyone who is not a genius cannot pass. On the other hand, we may have a sentence like this:

This presupposes that there is no other genius except the one we are referring to. There could be several geniuses in other places though.

Other uses of ‘Only’

In essence, ‘only’ in the adjective sense mostly occurs before the nominal group, not after it. Consider this sentence:

However, note that A cup of tea only is okay may be correct for pragmatic or discourse purpose.  We know that ‘tea’ refers to the ‘dry leaves’ (to which we could add sugar, milk, lemon, etc.). Therefore, A cup of tea only is okay would mean ‘tea without anything added to it’. Here, the focus then is on the quantified (tea) not the quantifier (cup).

This is no longer adjectival but adverbial.

Consider the following variations of ‘only’:

(The participant was not more than forty years old; the focus is the age)

(There were other people [maybe observers, reporters, umpires…] but none of them was forty except the participant)

I am sure reading and digesting this post, you will henceforth know how and when to use ‘only’ in a sentence