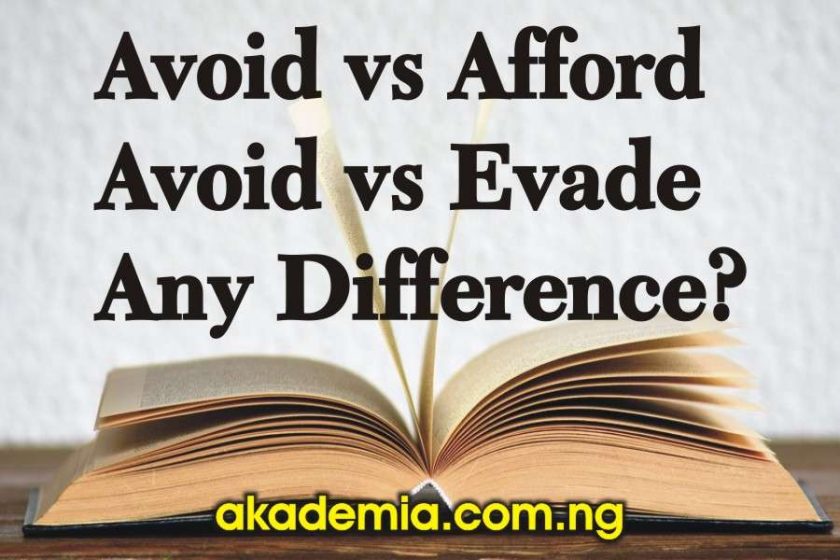 Welcome to this page! I am sure you are learning a lot under our Common Errors Category. I would like to show you by this post titled, Avoid vs Afford and Avoid vs Evade: Any Difference?, words that most users of English confuse due to lack of proper understanding on what they mean and how to use them. It was the German Physicist, Werner Heisenberg who said, ‘An expert is someone who knows some of the worst mistakes that can be made in his subject, and how to avoid them’. So let us learn some of the mistakes people make with these words and avoid them.

Avoid vs Afford and Avoid vs Evade: Any Difference?

Many users of English as a Second Language, especially in Nigeria, confuse these words. They use ‘avoid’ in the place of ‘afford’ and vice-versa. It is more of a problem of mother tongue interference or accent. Understanding clearly the meanings of ‘avoid’ and ‘afford’ will prevent this confusion.

What Does Avoid Mean?

Avoid is a transitive verb that means keeping away or not going near someone or something. For instance:

It also means to manage not to do something or prevent something. For example:

What Does Afford Mean?

Afford, also a transitive verb, means to be able to buy something, be able to do something or be able to spare something. For instance:

It also means to provide or supply something. For example:

So take note of these two words when you have to use them so as to avoid any confusion. Let us consider the other pair…

Still on the issue of confusion, the words ‘avoid’ and ‘evade’ also confuse many people. Some, however, know the difference, but when it comes to appropriate use based on appropriate context, their own confusion begins. But not to worry, we are here to clear the confusion. Let us begin by looking at the word ‘evade’.

It is a transitive verb that has different shades of meaning. Let us see some of them:

To cleverly escape or avoid somebody or something, usually by ingenuity or guile, dexterity or stratagem.

To avoid doing something unpleasant, especially something that is a moral or legal obligation.

To give an indirect response or to avoid dealing with or responding directly to something.

To be unattainable to somebody, to be difficult or impossible for somebody to find, obtain, or achieve.

‘Evade’ is synonymous to ‘avoid’; but in the componential analysis of the two words, one has a negative undertone while the other does not. So which is which? The main difference between ‘avoid’ and ‘evade’ is that in terms of tone, ‘avoid’ is neutral. In the case of ‘evade’, it implies dishonesty or deception, or at least some measure of duplicity or ulterior motive.

Another difference between ‘avoid’ and ‘evade’ is that a verbal noun can follow avoid but it is only an ordinary noun that accompanies ‘evade’. See the following examples:

‘Elude’, closely related to ‘evade’ implies clever or ingenious avoidance, dodging, circumvention or averting of a situation or someone. Take for example:

It also has an extended meaning, to escape perception, discovery, understanding or grasp of, baffle, as in:

I am sure you have learnt something useful from this post. Don’t forget the words of Werner Heisenberg, be an expert! See you around.