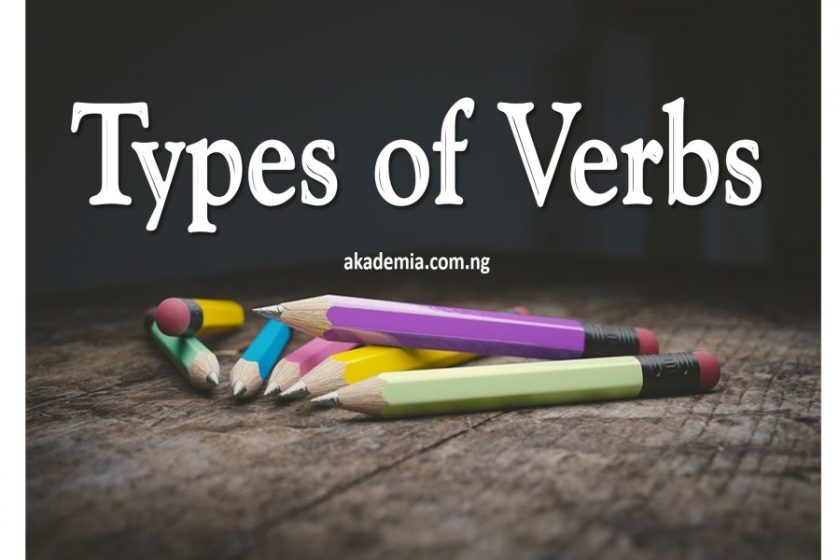 It would interest you to know that of all the English Parts of Speech, Verb is the most versatile and most dynamic. In some context, we can use it to represent a whole sentence like you have in: Go! Sit! Get out! There are different types of verbs in English and this post specifically examines nine (9) different types you need to know. Some of these nine types also have subtypes. Read on as we look at each type closely!

NOTE: You can watch the stimulating video lecture on the various Types of Verbs on Akademia EduConsult.

Transitive verbs are verbs that indicate the transference of an action from the subject to the object. They are verbs that admit direct objects. Examples include:

These are verbs that do not accommodate direct objects. In other words, the action in the sentence rests solely with the subject (performer). Consider these examples:

In the examples above, you will observe that once the subject changes the verb form also changes. That is why they are finite verbs.

Non-Finite verbs are verbs that cannot indicate tense, aspect, agreement and mood. They are verbs whose forms are NOT tied to the subject of the sentence. In other words, they are NOT limited in their manifestations. If the subject of the sentence changes, the non-finite verbs will still retain their forms and will not change. Non-finite usually have three (3) forms of identification. These include:

The progressive (‘ing’) form of the verb

Note that the form of the verb ‘visiting’ did not change in all the sentences even when the subjects and the tenses changed.

These include verbs such as: visited, expected, taken, stolen, eaten, shouted, padded, etc. Look at these examples:

Note that the forms of the verbs ‘stolen’, ‘expected’ and ‘eaten’ did not change in all the sentences even when the subjects and the tenses changed.

The infinitive (to+verb) form of the verb

The infinitive includes verbs such as: to eat, to sleep, to dance, to stand, to greet, to go, to draw, to pay, to collect, to travel, to sit, etc.

In the examples below, you will observe that the verb in the infinitive form did not change in form even when the subject changed:

Dynamic verbs are verbs that indicate action and verbs that can admit the progressive form.

There are five (5) types of verbs under the Dynamic verb. They are self-explanatory from their names. They are:

These verbs usually do not admit the progressive form.

The ‘be’ form of the verb is the most common of this type. When any of them exists alone as a single verb element, the verb is ‘intensive complement’. E. g.

Reflexive verbs are verbs that have as their direct objects reflexive pronouns. E. g.

These are verbs that are used to convey the idea of reciprocity or a two-way relationship between the subject and the object in a sentence. Examples include:

Having gone through all these types, let me inform you that there are yet other types of verbs. I explain these other types comprehensively in another post. Read more about regular verbs, irregular verbs and their categories.