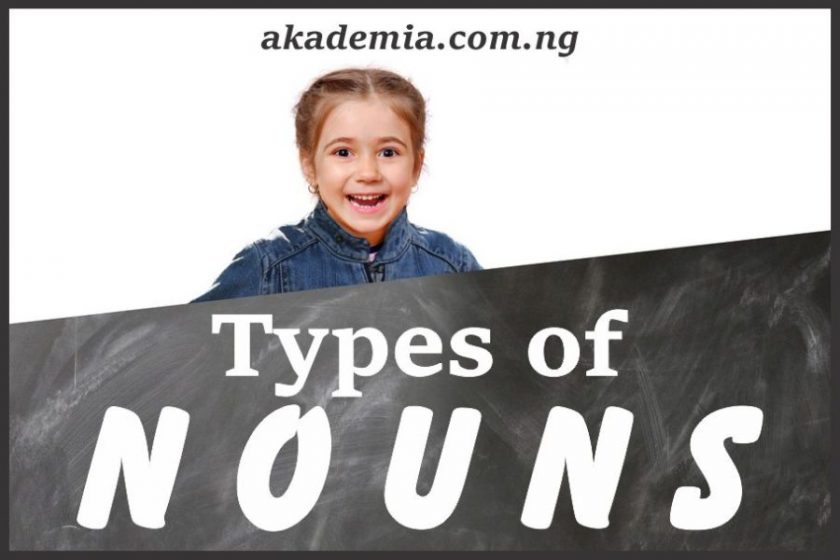 Glad to know you are reading this right now. I am sure you really want to know types of nouns with examples. We cannot talk about types of nouns if we do not first talk about the concept of a noun itself.  I have put together a post on what a noun is. It would be great if you can look up the post. But here, we discuss the different types of nouns that we have in the English language.

Now let us examine each of these types closely…

These can be found personal names, with or without a title such as President Buhari, George, Mr. Bala, Pastor Alfred, Dr. Sally, etc.

Proper nouns can also be pre-modified such as:
‘The Daily Sun’,
The Suez Canal, etc.

They could also be post-modified e. g.
House of Lords
The House of Representatives
House of Assembly
House of Commons
Alexander the Great
Paul the Apostle
Jesus the Christ etc.

Proper nouns can be combined sometimes with common nouns, and when this happens the resulting expression is taken as a proper noun.

Common nouns are general nouns. In other words, they are common as the name goes. They are not names like proper nouns but they can be a label. For instance, ‘boy’ is a common noun which denotes a label used for a young male. Proper nouns, when they do not refer to a specific entity, can also be changed into common nouns.

These are nouns that we can count easily and have the countability nature. We can pluralise them and they can accommodate articles ‘a’ or ‘an’ before them. When you think of anything that you can count, it is most likely a count noun. Examples include: boy, child, girl, pen, pencil, book, television, car, bicycle, phones, cups, lorry, tanker, chair, table, baby, woman, man, father, mother, sister, mouse, animal, bird, insect, dog, etc.

These are nouns that we cannot count or we usually do not count. Examples of these nouns are salt, water, sand, oil, cement, powder, etc. They cannot be pluralised either can they accommodate the articles ‘a’ or ‘an’ before them. However, we can count or pluralise them ONLY when we put them in measurable forms or when we consider them from the perspective of their containers. For example, we cannot count bread but when put in loaves, it becomes easier to count. So we can have five loaves of bread, seven tubers of yam, three gallons of oil, four sachets/bottles of water, three cups of garri, six bags of cement, one load of sand, four items of information, seven yards of cloth, etc.

From the name, these nouns express abstract concepts, feelings, ideas, emotions, feelings. In other words, they are concepts that we cannot see, touch, handle or taste. Examples include: courage, bravery, importance, wisdom, beauty, honesty, integrity, success, failure, etc. However, in some cases, we can feel some abstract nouns like: hunger, anger, pain, relief, joy, sorrow, sadness, happiness, gladness, fear, etc.

More examples on the collective noun include: colony, crew, litter, drove, anthology, herd, flock, pride, orchestra, pack, troop, swarm, audience, cast, tribe, shoal, convocation, congregation, army, bench, troupe, host, company, etc. I same across an anonymous and interesting description of collective nouns found in the Journal of the American Medical Association; here it is: “Nouns of multitude (e.g., a pair of shoes, a gaggle of geese, a pride of lions)…: a rash of dermatologists, a hive of allergists, a scrub of interns, a chest of phthisiologists; or, a giggle of nurses, a flood of urologists, a pile of proctologists, an eyeful of ophthalmologists; or, a whiff of anesthesiologists, a staff of bacteriologists, a cast of orthopedic rheumatologists, a gargle of laryngologists.” Read more on Collective Nouns from the posts below:

We also refer to these types of nouns ‘gerund’. Gerunds are verbs that end in the ‘-ing’ suffix; that is, they are verbs in the progressive or continuous forms. Structurally, verbal nouns look like verbs, but they are actually nouns because their functions are similar to those of nouns. Examples include:

These types of nouns show possession. They indicate that a noun possesses something. Depending on the usage, they can also function as possessive adjectives. Examples:

Nouns are important parts of speech and we need to know everything that has to do with them. Do share this post with your friends and get across to us on our Social Media Platforms.