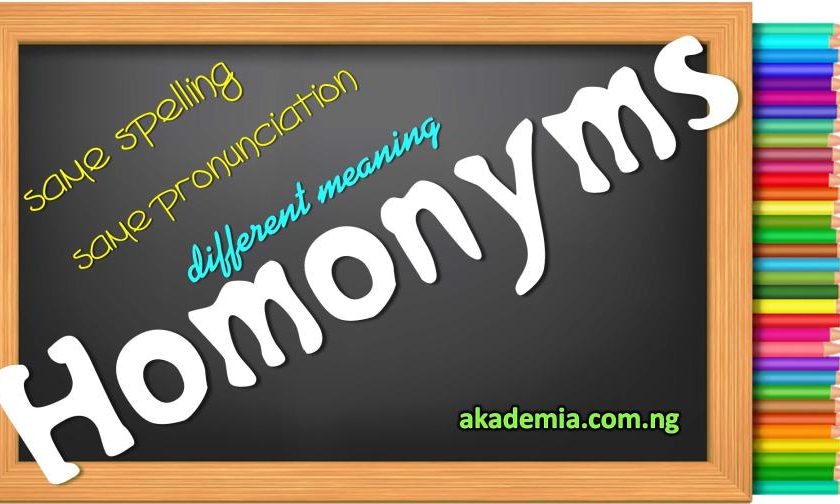 This post is dedicated to looking at words that belong to this category that are likely to confuse users of English language. These types of words belong to three distinct categories and they are: Homonyms, Homophones and Homographs. There is something common to these classifications and that is the word “Homo” which carries the idea of “being the same”. Words that belong to each of these categories have some things in common which could be in terms of spelling or pronunciation. Let us consider one of these categories of words: Homonyms

Bill – this is a noun that means “money owed for goods or services supplied or a written or printed account or statement of money owed”. It also means a printed or written advertisement for a programme, event, concert, show, etc. Look at these sentences:

Fair – this is an adjective that means attractive or beautiful to look at, light in colour. It also means just, impartial, free from discrimination or dishonesty. E. g.

Fair – in this regard, the word fair, which is a noun, means a travelling entertainment with sideshows, rides, etc. that visits different places from time to time. It also means an exhibition, a regular assembly at a specific place for the sale of goods, etc.

Pulse – a pulse, in this context is the “the rhythmic contraction and expansion of an artery at each beat of the heart, often discernible to the touch at points such as the wrists”. E. g.

Pulse – Pulse, in this other sense, means “the edible seeds of any of several leguminous plants, such as peas, beans, lentils, clover, alfalfa, etc.

There are very many examples of homonyms in the English language. Can you find out more on your own and possibly with the aid of a dictionary? See more examples provided for you and endeavour to use them in sentences of your own:

Read on Homographs and Homophones.