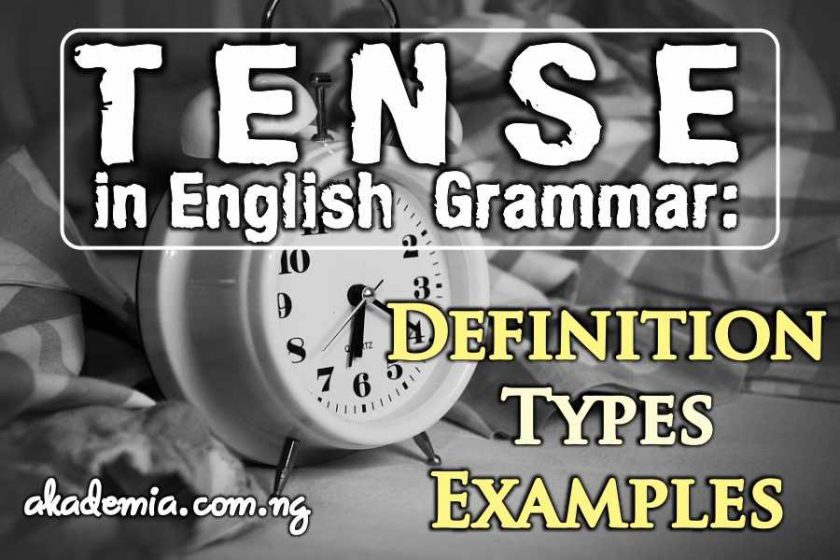 Hello there, friend! You are just right on time! How did you come about this article? You must have been following my posts on Akademia. Good! What do I have on the plate for you today? It is something refreshingly enlightening and informatively educative! I call it, Tense in English Grammar: Definition, Types and Examples. It has nothing to do with tension or being tensed, no! Don’t think in that direction. Thank you.

There are many grammatical concepts in the English language which you need to know about. I did a post recently on Concord: Subject-Verb Agreement. I explained the relationship that should exist between both the subject and the verb in a sentence.  The Verb is one part of speech that can be inflected based on time, that is, it can change its form based on certain conditions. See the post on what a verb is and different types of Verbs for more explanations.

Let’s get back to our discussion. There is a form of the verb that we can use when making reference to the present time or what is currently happening. If we are going to use the same verb to makes reference to what has already happened, the form of the verb will necessarily change to accommodate past time! So what then is Tense in English? As your linguistic pilot, kindly fasten your seat belt as I, with all pleasure, take you on a grammatical cruise on the journey of The English Tense.

Once upon a time…I can see you like stories. There is one global singularity which is accessible to and levels every human on Planet Earth; it is TIME! Time is a universal phenomenon. It is used all over the world. Time is not the same as tense but it has a strong affinity with tense. Time, within the purview of our discussion, is divided into three distinct segments: the present, the past and the future time! However, tense varies from one language to another. Tense, unlike time, is not universal.

A Definition of Tense in English

Tense, therefore, is the morphological change that takes place in the form of the verb to indicate time. It is a grammatical category of verbs that we use to express distinctions of time. Tense also refers to a verb form or series of verb forms that we use to express a time relation. Tense may indicate whether an action, an activity or a state is in the past, happening presently or will take place at a future time. In other words, it is a form of the verb which shows the time an action takes place.

English verbs have only two (2) simple tenses. Yes! You heard me! Let me say that again using different words. There are only two (2) tenses in English and they are which are distinctly marked by differences in form. They are the Simple Present and the Simple Past. ‘But you just told us time is divided into three segments of present, past and future’. Oh yes! I did and I am not recanting! ‘So why is there no future tense?’ That is why I put together this post. Categorically speaking, there is no change of form in English verbs to show future time. You can have a single verb in the present tense inflected for the past tense. But the same verb cannot be inflected to show future tense. If we inflect the present tense verb ‘see’ to show past tense, we have ‘saw’. What do you have if you inflect this single web to show future tense? Don’t burst a vein, send it to me in the comment box below. The future tense is insupportable and unacceptable because there is no change that occurs in the simple form of the verb to express the future!

There is a type of grammar we refer to as traditional grammar and we call its adherents Traditional grammarians. It is the oldest form of grammar. Its proponents are also known as Prescriptivists! Easy! Please don’t bite your tongue. They uphold the tenets of Prescriptivism which is “an account of how a language should be used instead of how it is actually used; a prescription for the ‘correct’ phonology and morphology and syntax and semantics”. (Encarta, 2009)  There is a post on what Grammar is where I touched on various notions and definitions of grammar; do take a look. These are the folks who originated the idea of the future tense. They took shall and will as matters of the future. For instance:

However, these modal auxiliaries have other functions. There are other ways of indicating futurity e. g.

So, the future time does exist, but there is no future tense and that is why we shall limit our discussion on Tense to the two types we mentioned earlier. Our position is based on the Modern, structural or functional grammar or better still, the Descriptivists who uphold the tenets of descriptivism which deals with the “the study of a language limited to a comprehensive account of its grammar at a given time, omitting historical or comparative features and not attempting to formulate prescriptive rules”. (Encarta, 2009)

The Two Types of Tenses in English

From the foregoing, it is clear that there are only two types of tenses in English. Someone wrote that there are 12 Basic English Tenses. But from my explanation, and based on the School of thought I subscribe to, the Descriptive linguistics, there are two types and they are:

We use the Present Tense when the action, state or event we are making reference to is happening at the time of talking about it or when the speaker does not wish to make any explicit temporal reference. Examples include:

We use it to show the simple present tense verb forms by using the base form (infinitive) of a verb and the base form + s.  E. g.

Also, when we have these third-person plural pronouns (I, we, you, and they), we use the base form of the verb to indicate present tense. For example:

In addition, when we have any singular noun or any of the third person singular pronouns as the subject in a sentence, we use the singular form of the verb; that is, the base form + s. For example:

Function of the Simple Present Tense

There are certain specific functions the simple present tense performs. We use it in expressing the following:

Capability or potential ability to do something

A completed action at a definite past time

A habitual past action

So What Happens to Future Time?

Have you read any of the pulsating James Hadley Chase series? There is one that goes by our subtitle: So what happens to me? Interesting! I can hear the future tense sobbing outside as we have banished it from our camp. In any case, how then do we express futurity? I already gave you few hints under the subtitle, Traditional Grammar. But let me itemise them again, with some additions, ways to express future time or futurity:

The use of modal auxiliaries ‘shall’ and ‘will’

The use of simple present tense (third-person singular verb)

The Use of Present progressive

With my last point, especially with the word ‘progressive’, I have just hinted on a post I have prepared which accommodates some grammatical areas that cannot be sufficiently handled by the English Tense. The post centres on another system in English known as Aspect. Aspect sufficiently accommodates other insupportable types of tenses (Present/Past Continuous, Present/Past Perfect, Present/Past Perfect Continuous and so on) that traditional grammarians are bandying about. You don’t want to miss the post! Check it out here and learn more and gain some linguistic speed or momentum; which do you prefer? Thank you for hanging out with me. See you around!