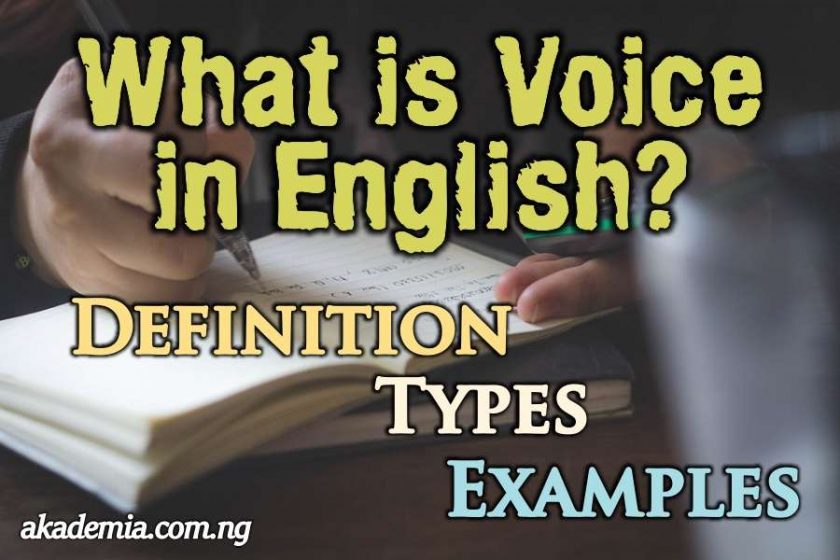 You may be wondering if we are in a music or phonology class where we can see voice as the sound made by the vibration of vocal folds modified by the resonance of the vocal tract. No, we are not! We are actually in English Grammar class. Voice is one of the systems in English that operates at the clausal level. As much as we study tense and aspect in English grammar, we also need to study the concept of voice. So this post, What is Voice in English? Definition, Types and Examples, becomes relevant.

What is Voice in English? Definition, Types and Examples

More precisely, voice is a term we use to describe the system which makes it possible to choose a form of verbal group marked as passive. It relates to the form of the verb that shows whether the subject of a sentence does an action or has an action done to it. Voice is the technical term which allows us to make such choices.

Types of Voices in English

There are two (2) types of voices in English. They are:

Let us examine each one of these closely…

Examples of the Active Voice

The passive voice has to do with a verbal group that contains forms of the be-verbs plus the past participle form of the verb in passive in voice. In other words, we mark the verbal group for the passive words.

Examples of the Passive Voice

To make this type clear and distinguishable from the active voice, let us use similar sentences used above, but in the passive forms. See the following:

We can see the relationship between the active and passive words from the following.

The real actors have now been embedded within the adverbial group operating in the adjunct which follows immediately after the predicator. At times, the real actor is deleted. For example:

Uses of the Passive Voice

Whenever you write, always avoid the temptation of using active and passive voices together in one sentences as demonstrated below:

We do not often come across this unwieldy construction which we know as the double passive; where a writer introduces two passive constructions close together in the same sentence. It is an error we have to avoid. For example:

To remove the double passive, we can properly rewrite the example above thus:

We cannot render any of the examples above in the passive form. Do you mind giving it a try? You will come up with ludicrous sentences.

When we change a structure from the active form to the passive form, we notice the following:

1. The tense of the structure remains but the aspect of the verb changes. See the following illustrations:

3. Retained Complement – there is a possibility of the retention of one of the complements for a verb that accommodates two objects in passive structures. Let us show this with the following examples:

When we use too much of the passive structure, it makes our text looks verbose or ostentatious. However, the active voice makes our texts more straight and desirable. Compare the first sentence below with the last two. I am sure you will prefer the second or the third one:

I hope you have learned something useful in this post on Voice in English Grammar. Keep reading our posts for more linguistic illumination. Thank you!