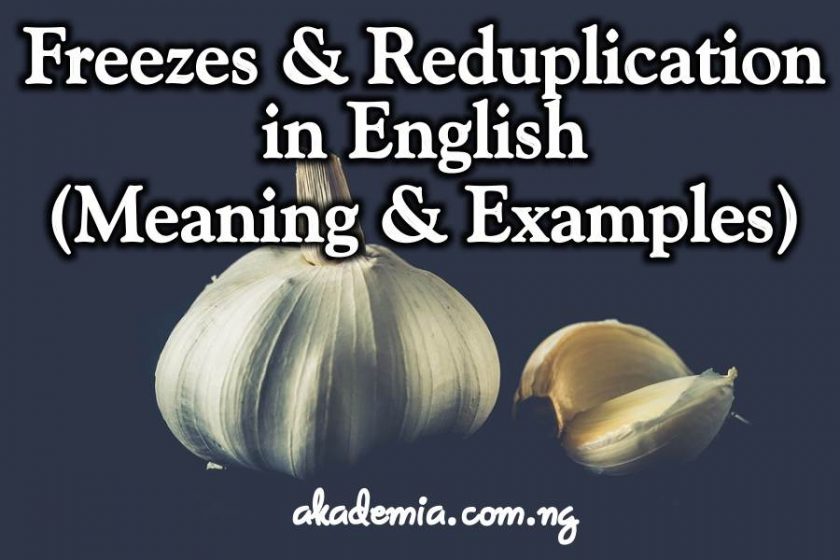 Welcome to Akademia, where you learn all you need to know when it comes to the English Language! Do you know Winnie the Pooh? It is one of the whimsical plays popular in the 1920s created by the British writer A. A. Milne and a delight of children. Pooh, the bear character, said something whimsical: I am a Bear of Very Little Brain, and long words Bother me. If you are like Pooh, then I have put together series of short words that will not bother you but will rather enlighten you as you read this post titled: Freezes and Reduplication in English (Meaning and Examples).

The Humour Side of the English Language

In the post The Eccentric Nature of the English Language, I elucidated on the humorous side of the English language. There are some special classes of words whose structures and pronunciations evoke a sense of humour. We call such words Freezes or Reduplications. See the post, Crinkum-crankum and Similar Expressions in English: Definition, Meanings and Examples and also Helter-Skelter and Nitty-Gritty – Meaning and Examples of Rhyming Reduplications in English for broader understanding of these unconventional words!

What is Freezes or Reduplication?

Freezes or Reduplications are a special class of words or expressions in which the ordering of the two conjuncts that formed them is rigidly fixed in normal speech. Marge E. Landsberg in his article titled, Semantic Constraints on Phonological Independent Freezes posits: In English syntax, word order is not arbitrary but fixed or ‘frozen’; that is, governed by certain rigorous and recurrent rules, and hence predictable and generalizable. So Freezes and Reduplications follow certain linguistic rules.

Types of Freezes or Reduplication in English

There are generally three types of these special classes of words. They are:

I have discussed each of these types in different posts. But here, the focus is on the third type: Exact Reduplications. Let us take a look!

Freezes and Reduplication in English (Meaning and Examples).

These are somewhat baby-talk-like! They have to do with the same word repeated or reduplicated and they convey a particular meaning. Let us examine few of the exact reduplications in English (remember that long words bother Pooh) as listed and explained below:

We all stopped to say bye-bye before her flight left.

(Interjection): Exclamation to tell someone to be quicker. Same as c’mon, come on, get a move on, hurry up; quickly: used to indicate, often in a bossy or arrogant way, that somebody should hurry or do something quickly or right away.

For both companies, it is a win-win move.

Going out oat this time is a no-no; my father won’t approve of it.

Again, the cat had pee-peed on the expensive rug.

It is characteristic of pupils in the crèche to want to wee-wee simultaneously.

‘Don’t step on poo-poo!’ The mother screamed at the little boy.

She pooh-poohed his advances.

To disdain, freeze off, reject, scorn, spurn, turn down, decline, refuse, rebuff, repel, snub; show/express scorn for something: to dismiss.

Try to find out yourself other expressions that qualify as Exact Reduplications and send them to me in the comment box.