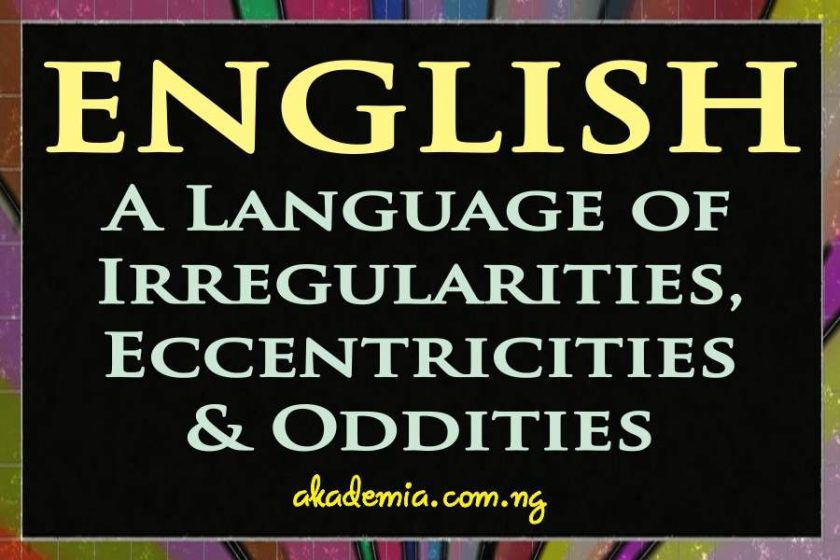 The English Language is one of the most popular languages of the world, no doubt. The English Language is the first of the three most widely spoken West Germanic languages with around 360 to 400 million native speakers; the two others are German and Dutch. It has more words than most comparable world languages. The best newspapers in the world are written in English. The estimated percentage of email messages in English varies between 60% and 85%. English is officially spoken in over 80 countries. But with all these linguistic accolades heaped on English, it is one language which is full of eccentricities, idiosyncrasies, weirdness, oddities and unbelievable peculiarities. This is why I titled this post: The Eccentric Nature of the English Language. Enjoy the read. I have some posers for you at the end. Do well to kindly send me your comments.

The Greatest Language of all Time

English is The Greatest Language of the World. Of some three thousand existing languages, large and small, English is second only to Chinese in number of speakers. It has well over 300 million native speakers, plus probably as many more who handle it in pidgin fashion or as an acquired tongue. It enjoys the widest distribution of any language on earth, appearing in numerous countries on every continent as an official tongue and unofficially in many more over half of the world’s scientific publications, books, newspapers and magazines are entirely or partly in English. In international congresses and gatherings, English is used more often than any other tongue. More than half of the world’s radio and television programs are in English and it is the language most commonly used in the world’s airways and seaways.

Why English is irregular

The English language is a language governed by rules and systems, yet it is the greatest defaulter from its rules. See the post ‘What is Grammar?’ The remarkable, yet eccentric and sometimes bewildering, nature of English can be demonstrated in the sentences below.

Consider the following, paying attention to the words in bold font:

I believe you what you have just read amused you, didn’t it? Okay. You would have noticed that some of the highlighted words have same spellings and sounded alike while some, though with same spellings, have different pronunciations with different meanings. What do we call words that have those attributes? I believe you want to know. Then read Homophones, Homographs and Homonyms. I am not yet done with the highlighted words; did you notice that they belong to different Parts of Speech? Some are nouns, others are verbs while some are adjectives! Let us go on with the discussion.

The Eccentric Nature of the English Language

Let us face it: English is a crazy language! Wow! That was a pungent assertion. Why would the English describe something as eggplant when there is no egg in it? Can you imagine? There is no ham in hamburger; neither will you find apple and pine in pineapple. It is unbelievable that England did not invent English muffins neither did France invent French fries. Sweetmeats are candies while sweetbreads (the pancreas or the thymus gland of an animal) which aren’t sweet, are meat. We take English for granted. But if we explore its paradoxes, we find that quicksand can work slowly, boxing rings are square and a guinea pig is neither from Guinea nor is it a pig.

In English word formation process, morphemes, both free and bound morphemes help us to derive new words and inflect our words. The bound morpheme ‘er’, suggests ‘someone who does something’. But in the eccentric nature of English, why do writers write but fingers do not fing, grocers do not groce and hammers do not ham? A person who teaches is a teacher; a person who drives, a driver; why do we not call a person who cooks, a cooker and a person who prays, a prayer? If the plural of the noun tooth is teeth, then it stands to reason that the plural form of booth should be beeth and not booths! Similarly, if the plural of foot is feet, why then is the plural form of root roots and not reet? We say one goose, two geese. So, we should just be fine with saying one moose, two meese!

Is it not irrational that one can make amends but not one amend? When one has a bunch of odds and ends and gets rid of all but one of them, what does one call it? If teachers taught, why didn’t preachers praught? We know a vegetarian eats vegetables, what does a humanitarian eat? Sometimes I think we should commit all the English speakers, especially the native ones, to an asylum for the verbally insane. In what language do people recite at a play and play at a recital? Which language ships by truck and sends cargo by ship? For goodness’ sake, in what language do people have noses that run and feet that smell? Those people must have been created upside down!

In English, a slim chance and a fat chance are the same; but a wise man and a wise guy are clear opposites! You have to marvel at the unique lunacy of a language in which one’s house can burn up as it burns down, in which you fill in a form by filling it out and in which, an alarm goes off by going on. People invented English, not computers, and it reflects the creativity of the human race, which, of course, is not a race at all. That is why, when the stars are out, they are visible, but when the lights are out, they are invisible!!!

I can imagine what you are thinking now having read the Peculiarities and Idiosyncrasies and Oddities of the English Language! But you have not yet read more absurdities and incongruities in English. Let us look at more illogicalities mostly in the form of questions…

I am sure you have answers to all these questions without answers; pardon me! Kindly mail me your answers in the comments section.

Identify the Parts of Speech of the Highlighted Words:

Source: Why English is Irregular from JOLAN platform. The author expanded and embellished the post.