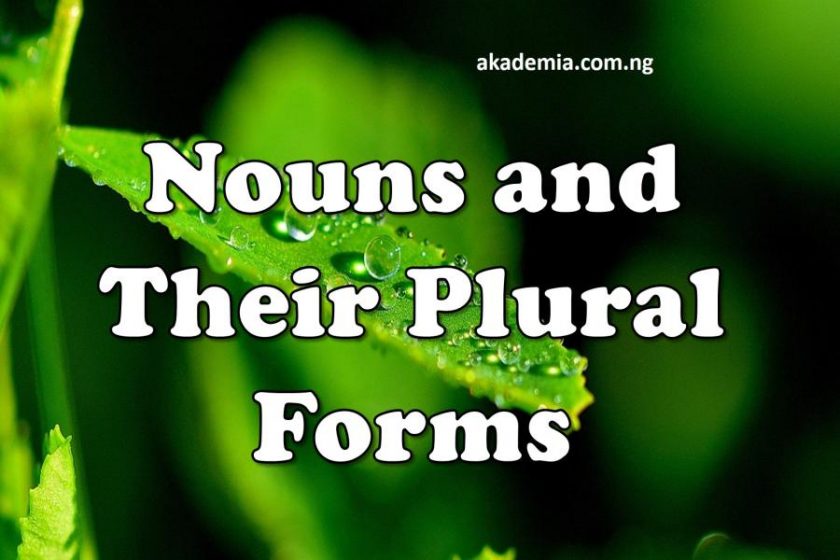 In looking at Nouns and their plural forms, it is imperative to note that the English Language comprises words derived from many other languages of the world such as Greek, Latin, French, German, Italian, etc. In most cases, plural endings of nouns are formed with the addition of any of the following suffixes:

But most nouns with foreign origins have their plural formed differently from the way other English nouns form their plurals. Certain nouns, however, have adopted the English plural forms like the following:

despite the validity of their original pluralised forms; that is:

Below are examples of some nouns and their plural nouns which are not originally English but were loaned into the English Language:

Nouns that Remain Unchanged in their Plural Forms

There are some nouns which remain unchanged in their plural forms. Some examples are shown below:

There are some nouns which always appear in the plural form whenever we write them. Examples of such nouns include:

A compound noun comprises two or more words that are hyphenated; that is, joined by a hyphen.

How Do we Pluralise Compound Nouns

The confusion often arises as to how to pluralise these compound words. We need to know that one of these words is a noun while the other is an adjective. Learners of English have problem in deciding which word is a noun and which one is an adjective.

Compound Nouns and their Plural Forms

Grammatically, only nouns and verbs can be pluralised and in a case where we have a noun and an adjective, it is the noun that we pluralise. So in compound words as described above, we pluralise the nouns which are usually the first words; but if the second word is a noun, it gets pluralised. In other instances, if none of the two words is significant in itself, we pluralise the last word.

Nouns Hyphenated with a Preposition

We form the plural of a noun hyphenated with a preposition by pluralising the noun. For example:

When None of the Words is a Noun

If none of the hyphenated words is a noun, we pluralise the second word. For example:

Nouns that End in -ful

For nouns that end ‘ful’, we simply add ‘s’. For example:

There are many more examples that you can lay hands on when it comes to Nouns and their plural forms. Thank you for reading through. Kindly connect with us on our Social Media Platforms.