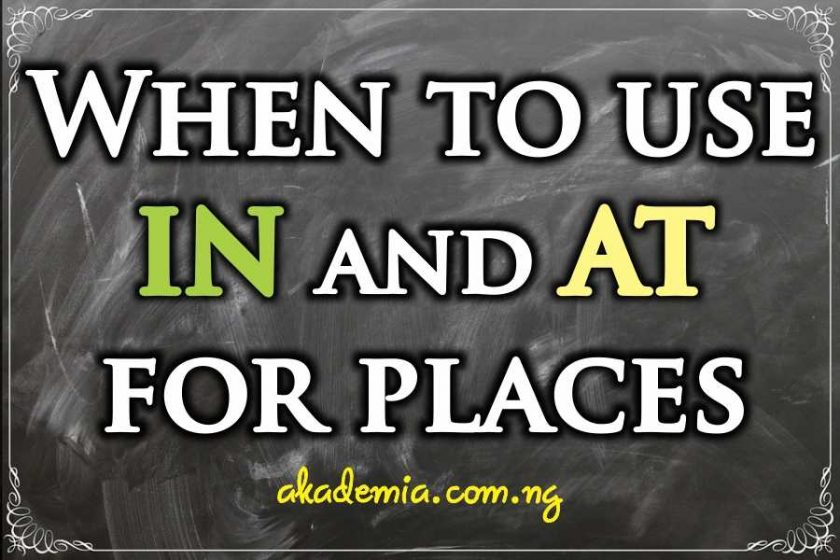 The phone vibrated and jarred the young man from his daydream. The velvety female voice at the other end of the line probed, “where are you?” “I am AT the Manager’s house”, he whispered. “Do you mean to say you are IN the Manager’s house?” she asked quizzically! “Please don’t start,” “I’m tired of your finicky linguistic disposition.” Hans bellowed!

He and Lizzy always quarrel on issues of grammatical correctness. Hans queried, “Do you mean I should have said ‘IN the Manager’s house rather than AT the Manger’s house?’” The argument began again for the umpteenth time… I’m sure you can relate to the story.

The prepositions AT and IN have given a lot of people linguistic headaches as regards which is more appropriate to use in relation to location. I guess you are one of them if not, you won’t be reading this. Probably, you do not have challenges with these two prepositions but you need to educate a friend on how to use AT and IN. Let us see When to Use in and at for Places based on certain parameters…

Both “at” and “in” are prepositions that we use to indicate location. Generally, it is understood in usage circles that “at” is used when we are talking about a point, that is, a precise location, while “in” is used when we are talking about an area, that is, a geographic area with an extensive boundary. So, for instance, we would say “I’m at the Abuja City Gate” because it is a precise location, but we would say “I’m in Abuja” because “Abuja” is a huge expanse of land with an extensive boundary.

An Exception to the Logic

Following this logic, grammarians generally agree that a small town is a point and a big city is an area. Therefore, the preposition of choice when we talk about a small town is “at” (e.g., “his wife lives at Ketu”) while the preferred preposition to refer to cities is “in” (e.g. “I live and work in Lagos”). However, it is perfectly legitimate to use “in” to refer to a village if you have a sentimental attachment to it. Only people who have no emotional connection with a small town use “at” to refer to it. But it gets even trickier. When we talk about any place (including big cities) as a point on a map, the only acceptable preposition is “at.” Example: “Dana Airline crashed at Lagos on its way to Abuja.”

There are also dialectal differences in the use of “at” and “in,” especially in reference to educational institutions. In British English, it is customary to say “at school,” “at college,” etc. while American English prefers “in school,” “in college,” etc. “At” has also emerged as the preferred preposition when companies talk about themselves self-referentially. Examples: “We at Daily Trust question the notion that…,” “At Union Bank, our goal is…” etc. But it’s good to note that “in” used to be the preferred preposition in companies’ self-referential statements. The change to “at” is a relatively recent usage shift.