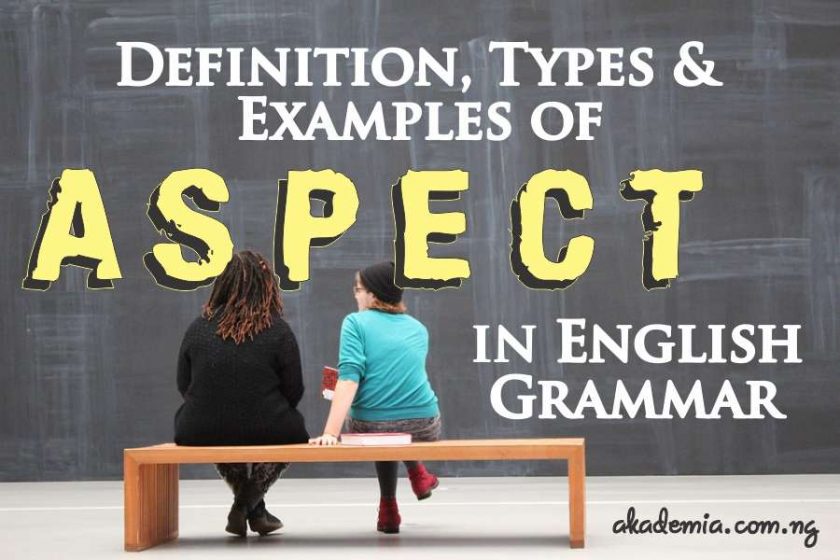 Thank you for joining me on another educative post titled: Definition, Types and Examples of Aspect in English Grammar. Welcome to another time of learning. In my post on Tense in English Grammar, I did say that the form of the verb we use to indicate present happenings is different from the form of the same verb we use when making reference to past time. I believe you still remember. Great! (You might want to take a quick dash there if you cannot remember, as there is nothing great about being forgetful). Okay! But that is not all.

Definition, Types and Examples of Aspect in English Grammar

There is another interesting grammatical concept that can adequately explain describe the forms of the verbs we use to indicate the completion or progress of an action and that is what I want to discuss with you. We refer to this grammatical concept as Aspect. It is one of the systems in English that occur at the clausal level. Are we good to go? Good! Let’s dive in.

What is Aspect in English?

Aspects relate to a verb form that shows whether an action, activity or a state is complete or continuing over a period of time. Aspect deals with the placement of an action with regards to time and not necessarily the actual time the action occurs, unlike tense. It is all about the complement of an action that the verbal group describes. Note that the verbal group that can indicate tense, aspect, agreement and mood is finite in nature; and the first element in the verbal group selects for tense (usually the non-modal and modal auxiliaries) while the main verb selects for aspect.

Types of Aspects in English

Just like tense, there are two (2) types of aspects in English. These are:

Let us examine each of the types in detail.

This type deals with the verbal groups which have the forms of ‘have + verb (past participle); that is, have/has/has plus the perfective form of the verb. In other words, Perfective Aspect is always indicated by HAVE +LEXICAL VERB +-ED/-EN. Under the perfective aspect, we have two sub-types:

Sometimes, we can add modal auxiliaries. In this case, we have present modal perfective E. g.

Examples of Past Perfective Aspect

Let us examine the other main type…

We can illustrate this with the following sentences:

Examples of Past Progressive Aspect

Co-occurrence of the Perfective/Progressive Aspects

Just like in the case of morphemes where both the derivational morpheme and the inflectional morpheme, though distinct, can co-occur in a sentence; so also, both the perfective and the progressive aspects can coexist in a sentence. But when this happens, the progressive aspect always comes last. It is not possible for the perfective aspect to come after its progressive counterpart. Both the modal and non-modal or primary auxiliary come handy in this situation. Let us illustrate this point with some sentences:

This can also be rendered as Present, Progressive-Perfective. E. g.

We can also have this as Past, Progressive-Perfective. E. g.

Conjugation of the Verb BREAK

With all we have explained above, let us conjugate the verb Break for more clarity in demonstrating the issue of tense and aspect:

Let me leave you with this thought as I round off on Aspect in English. Tense and aspect are not the same but they are closely related. It is possible to have tense without aspect but there can be no aspect without tense! Never forget that!

Don’t forget to leave your comments. Check out some other posts and share with your friends. I’m off to work on another post! See you soon! Bye!

See other people’s view on Aspect in English.

Difference between Been and Being with Examples

What is a Verb: Verb Definitions, Types & Examples