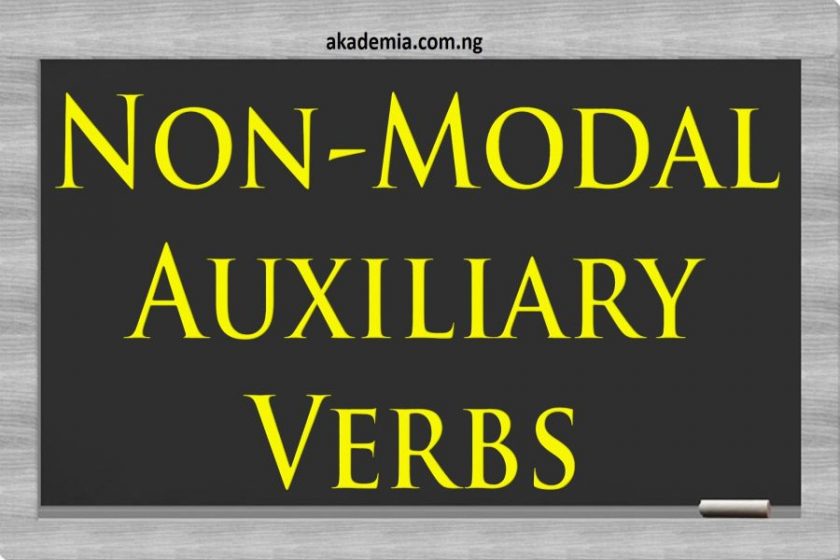 Hello, a lot of people are not so familiar with the non-modal auxiliary verbs, that is why this post presents a detailed discussion on Non-Modal Auxiliary Verbs: Forms and Uses. Non-modal auxiliary verbs are a vital part of the divisions of Types of Verbs in English. The three (3) Non-Modal Auxiliary Verbs are identified and discussed with copious examples and their various uses.

These are three (3) in number:

Forms of the ‘Be’ Verb

The Be-Verb has eight forms:

8. In imperative sentences, do can also come before imperative verbs to show their importance. For example:

Forms of the Verb ‘Do’

The verb Do has its different forms which we can inflect in the following ways:

With the addition of the negation, the verb Do can exist also as:

The above forms exist in the negative or contracted forms; when they are not contracted, we have these forms:

Forms of the Verb ‘Have’

The verb ‘have’ exists in the following forms:

With the addition of the negation, the verb Have can exist also as:

Functions of the Verb ‘Have’

As the Main Verb

This indicates possession, individual characteristics or relationships. For example:

The verb ‘got’ can also be used with ‘have’ to show possession, individual characteristics or relationships. For instance:

As an Auxiliary Verb

The verb ‘have’ also performs aspectual functions, especially when used with the main verb, to show whether an action has been completed or is still in the process of being completed. See these examples:

On a Final Note

You would have noticed that the other two non-modal auxiliaries, do and be exist in the progressive or gerundive forms but the case of have is peculiar. Some people believe that have can exist in the progressive form as a verb but this is not grammatical. The simple reason is that have belongs to the category of verbs referred to as Stative or State verbs. These are verbs that do not admit the progressive forms. Examples of such verbs include: have, see, love, like, believe, resemble, etc. See (Types of Verbs). Such verbs express a state: what is and what is not! There is no middle ground. See these examples, where the asterisked sentences are ungrammatical:

However, such verbs can accommodate the progressive forms only when they exist as verbal nouns. For instance:

Do not forget to share this post; it is just a button away. You can also check other grammar-related posts on this site. I await your questions and comment. Thank you for reading Akademia!

You should also endeavour to read more about modal auxiliary verbs