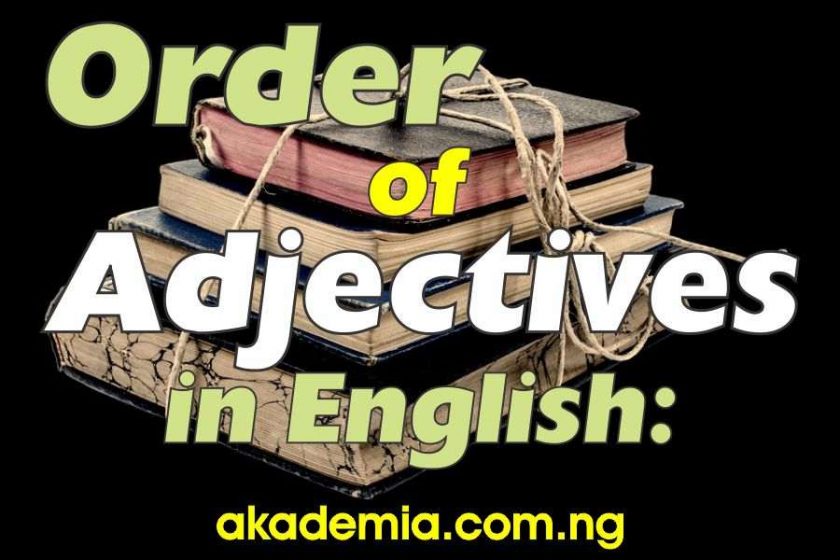 What is an Adjective?

An adjective is a word that modifies, qualifies or describes a noun. It is a word that assigns a characteristic (a distinguishing quality, attribute, or trait) to a noun or pronoun. Adjectives give us more information about a noun or a pronoun; information such as classification, size, quality, colour, number, quality, size, shape, etc. We can recognise adjectives in varieties of ways. (See the post titled, ‘What is an Adjective?’).

Order of Adjectives in English with Examples

There is a possibility of using more than one adjective before a noun in a sentence. When this happens, there is an order in which we arrange the adjectives. A lot of scholars have different preferred orders for the arrangement. However, there is no fixed order.

I will provide two sets of order. The first order generally used is:

How to Order Adjectives: Clues

There is a way one can remember this order easily. Gradable adjectives (adjectives that can take degrees of comparison; that is, show more or less of a particular quality) which describe opinion, size, quality, shape, and age usually precede non-gradable (participle adjectives and adjectives) which describe origin, material, type and purpose.

We can also arrange adjectives modifying a noun in the following ways, using these symbols listed below:

Put together, we have N A SW A S CO NO N; a group of eight parameters. Sometimes all of these may not be present in a sentence but this can serve as a guide to know how to order adjectives in a sentence when more than one is present. Let us take some examples:

As possible as it is for more than one adjective to occur in a sentence, there are some things we need to take note of. These include:

When two gradable adjectives precede a noun, we can insert either a comma or and between the adjectives. For instance:

When there are two colour adjectives, we insert and between them. For example:

If two non-gradable adjectives are from the same class, they have and between them. If they are from different classes, and is not used. Consider these examples:

Adjectives belong to the open class in the division of Parts of Speech. There are different types and the function in different ways. We can have more than one adjective in a sentence but they have to be properly ordered lest we have an unwieldy or a clumsy sentence. This post has made some clarifications on the ordering of adjectives. If you have been educated by this, I will like to hear from you. Send me your comments and remember to share this post and others; just a click away! Thank you for always reading my posts.