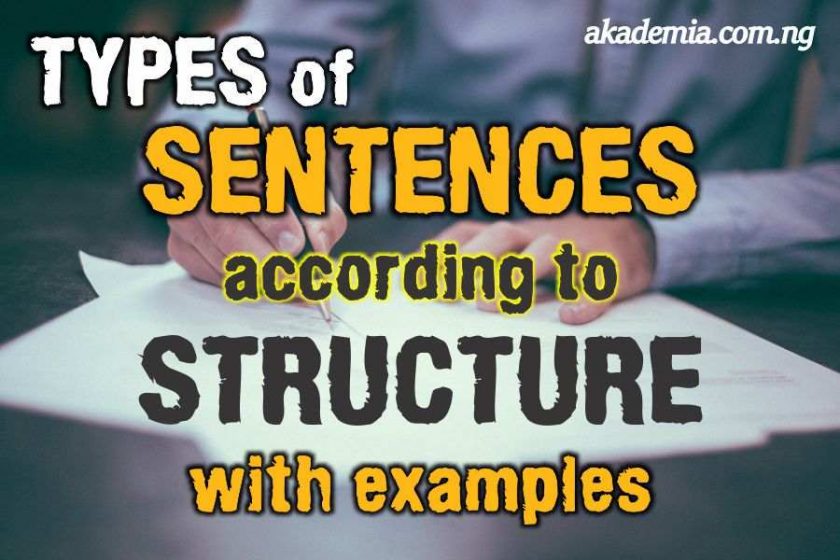 The Sentence is the largest grammatical unit in the English Rankscale and it refers to a group of words that begins with a capital letter and ends with any of these three punctuation marks: the period or full stop, the exclamation mark and the question mark. This post, Types of Sentences According to Structure with Examples, takes a close look at the English sentence, its definition and various types with illustrative examples for easy comprehension. Come along with me as we navigate this grammatical journey.

Types of Sentences According to Structure with Examples

Structural Classification of the English Sentences

There are six (6) types sentences based on structural classification. These are:

Let us discuss them one after the other:

A simple sentence is one which has one main or independent clause. We also know this clause by the name alpha clause. It is main, independent or alpha because it can stand on its own, unlike the subordinate clause. See The English Simple Sentence. The structure or the composition of the simple sentence comprises the subject, the predicator, the complement and the adjunct. But the only obligatory element here is the predicator.  See a detailed discussion on the syntactic elements of the clause structure. Let us see some examples of the simple sentence:

The first sentence has eighteen (18) words while the second sentence has a stunning forty (40) words, yet both of them are simple sentences. The point? Never determine a simple sentence by length, you will certainly be wrong. Let us see the next type of sentence under structural classification… You can check out more examples of Simple Sentences and a post dedicated fully to Simple Sentence: Definition with Examples.

The next type of sentence, based on structural classification, is the compound sentence. A compound sentence is a sentence with two main, alpha or independent clauses with no subordinate clause. That is, two clauses make up a compound sentence and the two of them are main clauses as we have in the following examples:

A sentence that is compound-complex is a sentence that has two main, alpha or independent clauses and one or more subordinate, beta or dependent clauses. In this type of sentence, one would find both a coordinator (linker) and a subordinator (binder) present. The linker joins the two alpha clauses while the binder(s) joins one of the alpha clauses with a subordinate clause. The following examples depict compound-complex structures:

A multiple sentence is a sentence which has three (3) or more main, independent or alpha clauses with no subordinate or dependent clause. Each of these clauses can stand on its own as a simple sentence. Consider these sentences:

This is the last type of sentences under structural classification of sentences. A multiple-complex sentence has three main, independent or alpha clauses plus at least one subordinate, dependent or beta clause. Examples of this sentence type include:

Can you give me the structural classification of the following sentences?

Tough right? If you are confused, go over the post again. Endeavour to send me your answers in the comment box.