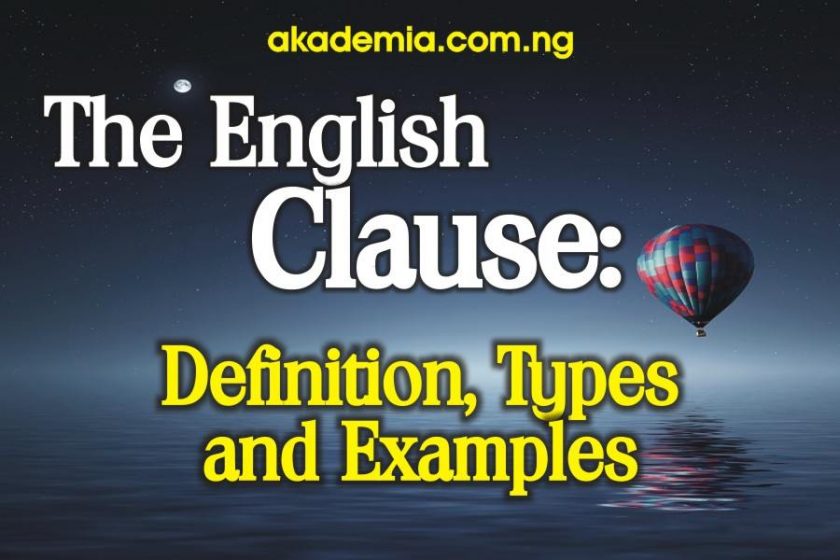 In the grammatical rank scale, the clause is the linguistic class that comes below the sentence and just above the phrase or group. What is a clause? This is a good question to ask at this point. Let us see the description of the English clause…

What is a Clause?

A clause is a group of words that includes a subject and a verb (it has a subject and a predicate) and forms a simple sentence or part of the non-simple sentence. A clause is a major unit of grammar and we define it by the elements it could contain: the subject, predicator, complement and the adjunct. As the finite verb is the most central to a clause, it is necessary to identify a clause by its main verb.

In broad categorisations, there are two types of clauses. These include the main clause and the subordinate clause. Let us briefly consider these two broad types…

The Main Clause: A Definition

A clause can stand alone as a complete thought or sentence. We call this type of clause Independent, Main or Alpha clause. This clause does not depend on another clause to fully express itself. Examples of the main clause include:

A sentence can contain more than one clause which can all be main clauses. In the instance of more than one main clause in a sentence, the clause is usually joined together by a coordinating conjunction. Such sentences could also be a simple sentence, compound sentence or a multiple sentence. (See Types of Sentences According to Structure). The main clause does not have any further subdivision unlike its other type, the subordinate clause.

What is a Subordinate Clause?

Classification of the Subordinate or Dependent Clause

Just as the clause has two broad classifications, we can also classify the subordinate, dependent or Beta clause at two levels. These are:

Structural Classification of the Subordinate Clause

The structural classification of the subordinate clause occurs under two types:

Let us examine each of these structural classifications of the subordinate, Beta or dependent clause…

The Finite Clause: A Definition

A finite clause is that which contains a finite verb. You may ask: ‘What is a finite verb?’ Good question! A finite verb is one which can inflect or vary its form to show tense, present or past. This is why we sometimes refer to finite verbs as ‘tensed verbs’ Modal auxiliaries, non-modal auxiliaries and main or lexical verbs all have finite forms. (See Types of Verbs). For a clearer understanding, we can also say a finite verb is that verb which is tied to or dependent on the subject.

One thing you will notice is that the finite verbs in the examples above change when the subject changes. Let us see the other type…

This contains a non-finite verb; that is, a verb whose form will not change with the subject. In essence, the verb is not tied to the subject. It could take the following forms:

‘–in’ Form of the Verb. (Progressive)

‘-end/-en’ Form of the Verb (Perfective)

When there are two elements in the verbal group, the finiteness of the verb is always realised on the modal auxiliary or non-modal auxiliary.

Functional Classification of the Subordinate Clause

Classification based on function has three manifestations and these are:

The Relative Clause or Adjectival Clause

I have discussed each of these levels in separate posts with definitions, types, functions and copious examples. Endeavour to see each of the posts.

A lot of people grapple with the concept of the Clause, the finite clause and the non-finite clause. If this post has been of help to you, do not forget to share with your friends; especially the one in schools, colleges and other higher institutions of learning for them to have a firm grasp of the English Clause. Check the other posts on the three divisions of the subordinate clause: Noun clause, Adverbial clause and Relative or Adjectival clause.