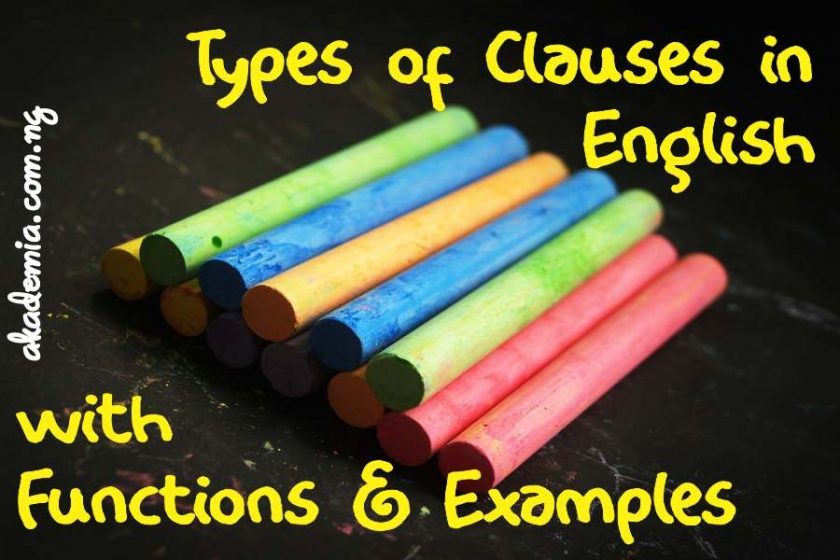 I welcome you to this platform again. This post gives a synopsis of all the Types of Clauses in English with Functions and Examples. Before we look at the various clause types, let us attempt a definition of the clause.

Definition of a Clause

A clause is a major unit of grammar and we define it by the elements it could contain the subject, predicator, complement and the adjunct. A clause is a group of words that includes a subject and a verb and forms a simple sentence or part of non-simple sentence. The finite verb is most central to what constitutes a clause.

Types of Clauses in English with Functions and Examples

This a major clause in English. It expresses a complete thought and can stand alone as a sentence. The main clause is also known as an independent or alpha clause. This clause does not depend on another clause to fully express itself.

If a sentence has more than one main clause joined by a coordinating conjunction, we refer to that as either a compound sentence or a multiple sentence. See (Types of Sentences According to Structure).

Examples of the subordinate clause include:

A finite clause is that which contains a finite verb. By finite verb, we mean a verb that can be inflected to show tense. (See Types of Verbs). We can also describe a finite verb is that verb which is tied to or dependent on the subject.

One thing you will notice is that the finite verbs in the examples above will change forms when the subject changes. Let us see the other type…

This contains a non-finite verb; that is, a verb not subject to inflection and whose form will not change when the subject changes. In essence, the verb is not tied to the subject. It could take the following forms:

Progressive form of the verb

Perfective form of the verb

The ‘To – infinitive’ form of the verb

See more on Noun Clause and its different types

This Clause does the work of adjectives and by this, it also has the name, adjectival clause. Adjectives are words that describe or give more information about nouns or pronouns in a sentence. We can divide the relative clause into two categories. There are two types of the relative clause. The first is the Restrictive Relative Clause which we also describe as the Defining Clause or the Qualifying Clause. The second type is the Non-Restrictive Relative Clause which we also call the Non-Defining or the Non-Qualifying clause.

We refer to the Restrictive Relative Clause also as adjectival clause because it qualifies the noun in a sentence. This clause helps to define the antecedent such that the referent of the antecedent becomes clear; hence, the name ‘defining clause. What introduces the adjectival clause includes the general pronoun ‘that’ and the relative pronouns such as who, whom, whose, etc. The Non-Restrictive Relative Clause is not an adjectival clause because it neither qualifies nor modifies a noun; rather, it gives more information about the noun in the sentence. The orthographic comma usually marks it off. It answers the question ‘which like the restrictive relative clause’.

Read more about the Relative clause.

There are various clause types which students of English and all who desire to be sound in English need to know. This post outlines these clauses with examples. There are dedicated posts on each of these clause types where I provided more details. You can endeavour to check them. Do share these posts; sharing is just a button away; click it below!