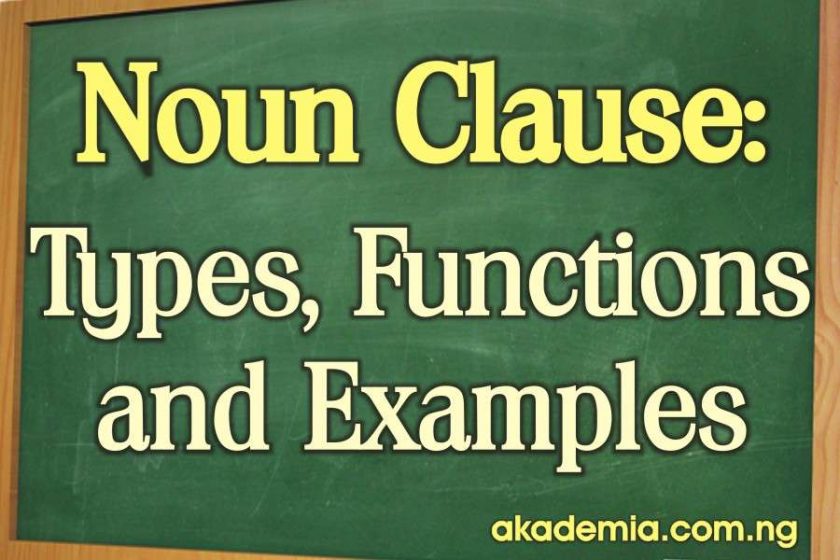 Welcome to this post I have titled, What is a Noun Clause? Types, Functions and Examples. To understand what noun clause is, you must first ask yourself, ‘what is a noun?’ The understanding of that will help you identify a clause that behaves like a noun. So let us get on with it…

What is a Noun Clause? Types, Functions and Examples

In examining this post, we shall begin with a definition or description of a noun clause which we also refer to as a nominal clause.

What is a Noun Clause?

For grammatical classifications that use ‘object’ instead of ‘complement’, noun clauses can equally stand as indirect or direct objects, nominatives (a grammatical form case of nouns and pronouns that identifies the subject of a sentence or clause), objects of a preposition. The following words can introduce a noun clause: what, that, where, why, when, which, whoever, whomever, and other such words. Let us illustrate what we have explained consider some examples:

The noun/nominal clause usually answers the question ‘who’ or ‘what’. For instance:

As mentioned earlier, noun clause performs the same functions as a noun in different ways. Let us examine the broad functions of noun clauses…

The following are various functions of noun clauses with examples to illustrate them.

A subject of a Sentence or a Verb

When a noun clause begins a sentence, it functions as the subject of a sentence or the verb that comes after it.

Try to generate more sentences on your own to test whether your understanding.

An object of a Sentence or Verb

A noun clause performs this function comes after the verb or when it is the recipient of the action the subject initiates.

The complement of the Subject

The Complement of the Object

Noun clauses serve as the complement of the object when it follows the direct object and refers to the same entity as that object.

Prepositional Complement or Object of a Preposition

Now that we have seen the functions of noun clauses with illustrative examples, let us look at manifestations or types of noun or nominal clauses…

The nominal clause has different types or manifestations and it will be beneficial for us to consider the various types. They include the following:

This usually begins with ‘that’. For example:

In instances where the ‘that-clause’ serves as the object of the complement, the conjunction ‘that’ might be omitted. For instance:

This is a noun clause that begins with a gerund or verbal noun. Examples include:

This is noun clause begins with a to-infinitive. See these examples below:

This clause derives its name because it begins with the ‘wh-‘ words. Examples include:

We usually form the yes/no interrogative with the use of ‘if’ or ‘whether’. Let us see some examples:

This post has considered one of the major sub-types of the subordinate clause or the dependent clause, the noun clause with its types, functions and examples. Ensure you check the two other sub-types, the adverbial clause and the relative clause. Do not forget to check the post, what is a clause as it would help you put all the sub-types in perspective. Remember to share this post and others with your friends by using our Social Media share buttons.