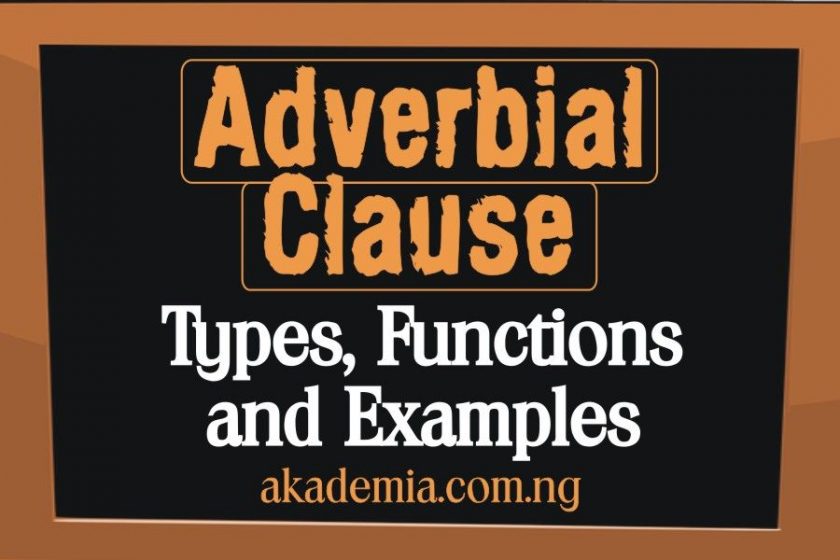 Glad to find you reading The Adverbial Clause: Types, Functions and Examples. An adverbial clause is the subordinate, Beta or dependent clause that performs the function of an adverb in a sentence. An adverb modifies the verb in a sentence (the verb must be stated). It answers the questions: ‘where’, ‘when’, ‘why’, ‘how’, etc. This is because the adverbial clause has different types. For instance:

It answers the question ‘when?’ which is an adverbial clause of time.

Function: It modifies the verb ‘ran away’. (A particle of ‘fled’)

Adverbial clauses are of various types and they perform the same function of modifying the verb in the sentences in which they occur. Let us see some types…

This refers to when an action takes place. For instance:

This refers to where an action takes place. For instance:

This refers to how an action takes place. For instance:

This clause tells us the reason for the action the verb expresses. Subordinating conjunctions such as that, because, since, as, etc. Examples include:

Note: sometimes, we might omit the conjunction ‘that’ as we have in the following sentences:

We use ‘as’ and ‘since’ when the reason is obvious to the listener. For instance:

In the case of ‘because’, we use it when the reason is NOT obvious to the listener.

This clause usually states the condition the verb in the main clause stipulates. Some of the subordinating conjunctions that introduce this clause include: whether, if, provided, unless, as long as, etc. Let us take some examples:

A relative pronoun may sometimes introduce a clause of condition. Look at the following:

As the name of this clause goes, it usually states that which we admit or acknowledge in the main clause. The subordinators that introduce this clause are mainly ‘though’ and ‘although’. However, there are other subordinators that could mean either of these words and which we could use in expressing concessionary clauses. These include: even though, while, despite, in spite of, whereas, etc. Let us see some sentences that exemplify the adverbial clause of concession…

We usually introduce this clause by subordinating conjunctions such as that, so that, lest, in order that, etc. The clause tells us the purpose of the action the verb states. Examples include:

Note: Modal auxiliary verbs usually follow the ‘so that’ clauses. It is also possible to omit ‘that’ in some instances like:

In the case of ‘lest’, the only modal auxiliary verb we use with it is ‘should’ if we must use any. However, we can have sentence with the ‘lest-clause’ without the use of should. For example:

Adverbial Clause of Degree or Comparison

Adverbial Clause of degree usually indicates the degree, that is, the relative extent or the comparison of the verb in the main or independent clause. It answers the questions how much, how many or how little. The subordinate conjunctions that usually introduce this clause include as, than, as…as, so…as and others. Let us see some examples of this clause:

Things to Note about Adverbial Clause of Degree or Comparison

Sometimes, we might consider the correlative ‘the…the’ as a conjunction which introduces the adverb clause of degree. Examples of this instance include the following:

Also, in adverbial clauses of degree, we normally understand the verb even though we do not express it. Let us illustrate with these sentences:

We should note that when we do not express the verb, it is more appropriate to use object pronouns after ‘as’ and ‘than’. Let us illustrate each of these pairs…

She can dance as well as him.

This post has looked at the concept of the adverbial clause with its different types and illustrative examples provided. Kindly recommend this post to your friends, especially students, by sharing it with them (just a button away. You would have helped a lot of people by sharing this post. Send in your comments and see other educative posts such as:

Thank you for always reading Akademia.