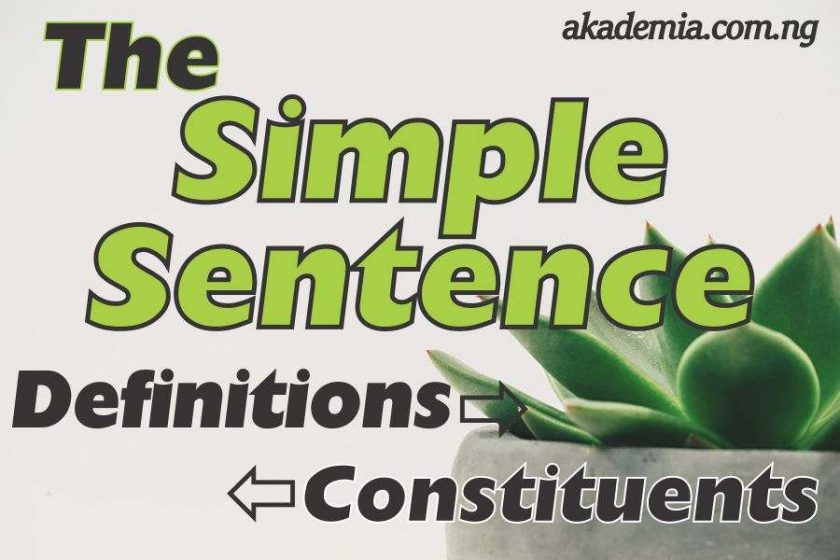 Hello friend! I am sure you have learned quite a lot on Akademia. I want to introduce to you a specific type of sentence in English, which is about the most common type and that is why I have titled this post: The Simple Sentence: Definitions and Constituents.

The Simple Sentence: Definitions and Constituents

Let us look at the definitions based on each of these perspectives starting with the last one:

Orthographic Definition of the Simple Sentence

At the orthographic level, we can describe the simple sentence as a group of words that is usually marked in writing by punctuation marks: question mark, full stop, exclamation mark or in some cases semi-colon. For example:

Semantic Definition of the Simple Sentence

At the semantic level sentence is a group of words that must be meaningful in context. If this is so, it follows therefore that a potentially complete stretch of utterance will be, as a whole utterance, meaningful within the situation in which it is uttered. The popular sentence by Noam Chomsky comes to mind here:

This sentence satisfies the orthographic definition of a simple sentence but semantically, it conveys no meaningful thought as it is full of conflicting imageries. However, in the poetic or literary circle, it could convey meaning. It would be wrong to say:

These sentences satisfy the orthography but not semantics.

Syntactic Definition of the Simple Sentence

In essence, a simple sentence is a sequence of words which does not form a part of any greater grammatical structure.

Phonological Definition of the Simple Sentence

At the phonological level, the simple sentence can be described as a stretch of speech that may be uttered with a complete intonational tune preceded and followed by silence. In other words, phonologically a sentence may be called a potential complete utterance.

Syntactic Elements of the Simple Sentence

Based on the different categories of Grammar, the simple sentence has the following elements:

Our model of discussion is the Systemic Functional Grammar. We have adopted the model to describe each of the four components of the simple sentence. See the post: Syntactic Elements of the English Clause Structure where we discuss each of the syntactic components in detail.

The Structure of the verb in the Simple Sentence

There are two broad categories of Verbs: The Lexical Verbs and the Auxiliary Verbs.

You can call these the ‘real’ verbs because they are lexically full; that is, they have actions in them, they are not empty. For example: dance, eat, jump, run, sit, cry, eat, sing, cook, etc. They are meaningful lexically. See the post on Verbs.

You can say these are not the ‘real’ verbs because they do not have a definite meaning, they are not as lexically full as the lexical verbs. The auxiliary verbs can be broadly divided into two types and I have explained them in details. They are:

There are other different verbs you can find in a simple sentence and which you need to know about. Some of them are finite verb, non-finite verb, stative verb, etc. See the post: Types of Verbs for more explanations. There is also the Regular and Irregular Verbs. Check them out too. I am sure this specific discussion on the simple sentence is clear to you, especially the various definitions based on the different linguistic perspectives.