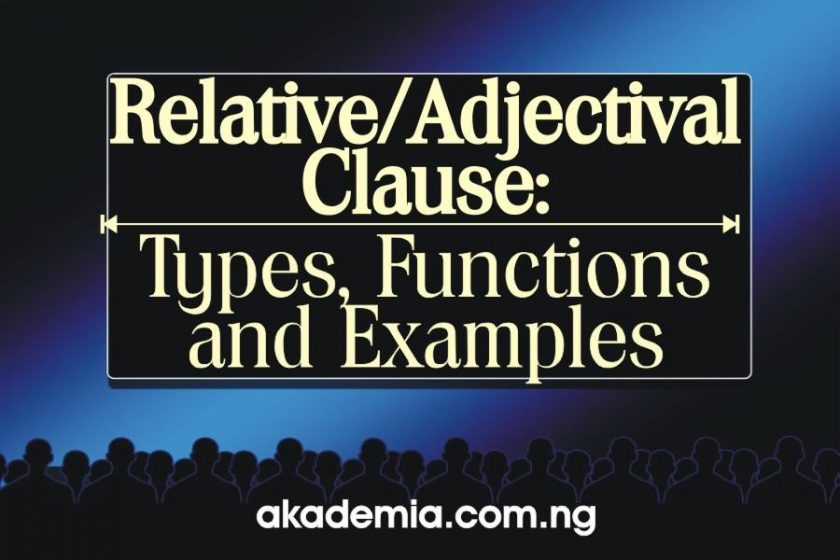 Welcome dear reader! I wish to share with you one of the sub-classifications of the subordinate clause: the relative clause. In the post on the English Clause, I did say that the understanding of the English clause structure is very crucial in gaining mastery of the English language. This includes getting a good grasp on the sub-classifications of the dependent clause. This post (The Relative/Adjectival Clause: Types, Functions and Examples) focuses on the adjectival clause and all the discussions around it. These include its two major types with illustrative examples. Let us check the clause out…

The types of words that usually point to the presence of a relative clause or introduce it are the relative pronouns which we can also call ‘relativizers’. This Clause does the work of adjectives and by this, it attracts the name, adjectival clause. Adjectives are words that describe or give more information about nouns or pronouns in a sentence. We can divide the relative clause into two categories.

Types of Relative or Adjectival Clause

The two types are:

Another description of this clause is:

The Defining Clause or the Qualifying Clause

We can also call this clause these two nomenclatures:

The Non-Defining or the Non-Qualifying

Let us look at these two types of relative clause closely…

We call this an adjectival clause because it is a relative clause, introduced by a relative pronoun that qualifies the noun in a sentence. The noun it qualifies is an antecedent (an expression to which a pronoun refers or, more appropriately, makes co-reference) and it normally precedes the pronoun in the text. The relative clause follows the antecedent and it answers the question ‘which’. This clause helps to define the antecedent such that the referent of the antecedent becomes clear; hence, the name ‘defining clause. We introduce this clause by the general pronoun ‘that’, and relative pronouns such as who, whom, whose, where and which. However, it may occur without a pronoun. It is important to note that punctuation marks do not separate the restrictive relative clause from the rest of the sentence in which it occurs. Let us see some examples:

Each of the underlined clauses answers the question, ‘which’.

Each of the restrictive relative clauses qualifies the antecedent noun phrases or nouns in the sentences in which they occur.

This clause is not an adjectival clause because it neither qualifies nor modifies a noun; rather, it gives more information about the noun in the sentence; that is, the antecedent whose referent we know already. Because it does not define the antecedent, we call it ‘non-defining’ relative clause. The orthographic comma usually marks it off. It also answers the question ‘which’. Let us take some examples:

The clause in parenthesis is a coordinate clause on its own and it is not part of the headword. It is not a qualifier to the modifier-headword (the man) neither does not qualify the noun; rather, it gives more information about it. More examples…

There are other posts on this platform that are related to the topic at hand. Take a look at them and they will give you more insight into the nature of the English Clause. They include the following: