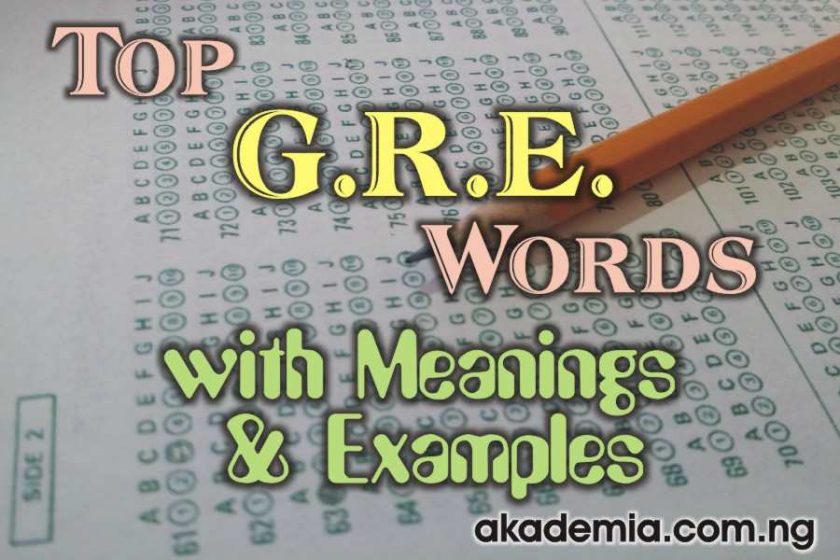 Hello friend, glad to know you are here again to read this informative post tagged: Top GRE Words with Meanings and Examples. It is good to know that proper planning prevents poor performance. If you wish to take the GRE examination or you have a friend who wants to, it is good you are all familiar with Top GRE Words with Meanings and Examples. Take note that being an American examination, the spellings used are American spellings.

You will get to know what GRE means, what it entails and the words you need to learn by heart to be successful in this international examination. Let us get to it!

What is GRE? I am sure you must have heard about this international examination if you are a prospective graduate student and you wish to study in America. GRE is the abbreviation for Graduate Record Examinations. It is a computer-based examination required by many graduate schools for admission to a wide variety of programs at the graduate level. In this post, I present to you the Top GRE Words with Meanings and Examples.

The GRE is designed to assess the readiness got a wide variety of graduate programs. Each section if the GRE is designed to assess general skills necessary for graduate school. Some of these skills include the ability to read complex information text and understand high-level vocabulary words in the Verbal Reasoning section, the ability to respond to an issue in the written form in the Analytical Writing section, and the ability to apply general mathematical concepts to a variety if problem types in the Quantitative Reasoning section.

To be successful in the English aspect of GRE, you must have mastery of Parts of Speech and you must understand words in context. The candidate must have mastery of word groups (See groups in English, nominal group, verbal group, adverbial group). The post, Top GRE Words with Meanings and Examples, offers basics of vocabulary building and words in context which are crucial to being successful in GRE.

Order of the Top GRE Words

GRE words occur in the order of importance. There is a set of top 12 words, then there is another set of 20 most popular words before the last set of 150 top GRE words. Let us see each of these sets of GRE words you must know to be successful in the examination…

The top 12 Most Popular GRE Words

The list below offers the 12 most popular GRE words; study them severally…

The Next 20 Most Popular GRE Words

The list below offers the next 20 most popular GRE words; study them severally…

This post reviews all these 32 words with their meanings and examples and the other top 150 words which a candidate of GRE must master and that is why this post it titled, Top GRE Words with Meanings and Examples. You will find the meaning of each word and its usage in a sentence. Let us see these almost 200 top GRE words!

Abate: to reduce in amount, degree or severity

Advocate: to speak in favor of

Aesthetic: concerning the appreciation of beauty

Aggrandize: to increase in power, influence and reputation

Amalgamate: to combine; to mix together

Ambiguous: doubtful or uncertain; able to be interpreted several ways

Ameliorate: to make better, to improve

Anachronism: something out of place in time

A2: Top GRE Words with Meanings and Examples

Analogous: similar or alike in some way; equivalent to

Anomaly: deviation from what is normal

Antagonize: to annoy or provoke to anger

Apathy: lack of interest or emotion

Arbitrate: to judge a dispute between two opposing parties

Attenuate: to reduce in force or degree; to weaken.

Bolster: to support, to prop up

Bombastic: pompous in speech and manner

Candid: impartial and honest in speech

Castigate: to punish or criticize harshly

Catalyst: something that brings about a change in something else

Chauvinist: someone prejudiced in favor of a group to which he or she belongs.

Chicanery: deception by means of craft or guile

Condone: to overlook, pardon, or disregard

Deride: to speak of or treat with contempt to mock

Desiccate: to dry out thoroughly

Desultory: jumping from one thing to another; disconnected

Dilate: to make larger; to expand

Dilettante: someone with an amateurish and superficial interest in a topic

Discern: to perceive; to recognize

Dissemble: to present a false appearance; to disguise one’s real intentions or character

Dissonance: a harsh and disagreeable combination, often of sounds

Dupe: to deceive; a person who is easily deceived.

Eclectic: selecting from or made up from variety of sources

Elegy: a sorrowful poem or speech

Emulate: to copy: to try to equal or excel

Enervate: to reduce in strength

Engender: to produce, cause, or bring about

Enigma: a puzzle; a mystery

Equivocate: to use expressions of double meaning in order to mislead

Esoteric: known or understood by only a few

Eulogy: speech in praise of someone

Euphemism: the use of an inoffensive word or phrase in place of a more distasteful one

Exonerate: to clear of blame

Foment: to arouse or incite

Frugality: a tendency to be thrifty or cheap

Garrulous: tending to talk a lot

Homogenous: of a similar kind

Iconoclast: one who opposes established beliefs, customs, and institutions

Imperturbable: not capable of being disturbed

I: Top GRE Words with Meanings and Examples

Impervious: impossible to penetrate; incapable of being affected

Impetuous: quick to act without thinking

Implacable: unable to be calmed down or made peaceful

Intransigent: uncompromising; refusing to be reconciled

Inundate: to overwhelm; to cover with water

Lament: to express sorrow; to grieve

Laud: to give praise; to glorify

Lethargic: acting in an indifferent or slow, sluggish manner

Malinger: to evade responsibility by pretending to be ill

Malleable: capable of being shaped

Misanthrope: person who dislikes others

Mitigate: to soften, to lessen

Obviate: to prevent; to make unnecessary

Occlude: to stop up; to prevent the passage of

Opaque: impossible to see through; preventing the passage of light

Paradox: a contradiction or dilemma

Paragon: model of excellence or perfection

Pedant: someone who shows off learning

Philanthropy: charity; a desire or effort to promote goodness

Placate: to soothe or pacify

Plastic: able to be molded, altered or bent

Pragmatic: practical as opposed to idealistic

Precipitate: to throw violently or bring about abruptly; lacking deliberation

Prevaricate: to lie or deviate from the truth

Proliferate: to increase in number quickly

Propitiate: to conciliate, to appease

Pungent: sharp and irritating to the senses

Rarefy: to make thinner or sparser

Repudiate: to reject the validity of

Satiate: to satisfy fully or overindulge

Stigma: a mark of shame or discredit

Vacillate: to sway physically; to be indecisive

Veracity: filled with truth and accuracy

Waver: to fluctuate between choices

Whimsical: acting in a fanciful or capricious manner; unpredictable

For those who would like to take the GRE examination, it is important they learn these top words by heart in the order of their presentation such that they would be able to use them as the need may arise in the course of the examination. However, this post is not only beneficial to prospective GRE candidates; anyone who wishes to learn words and their meanings will find this post educative. See it as an avenue to learn some English words and their meanings. I am sure this post was of immense benefit to you. Share with your friends and send your comments. I am always glad and eager to hear from you. See some other educative posts on this site. See you around!