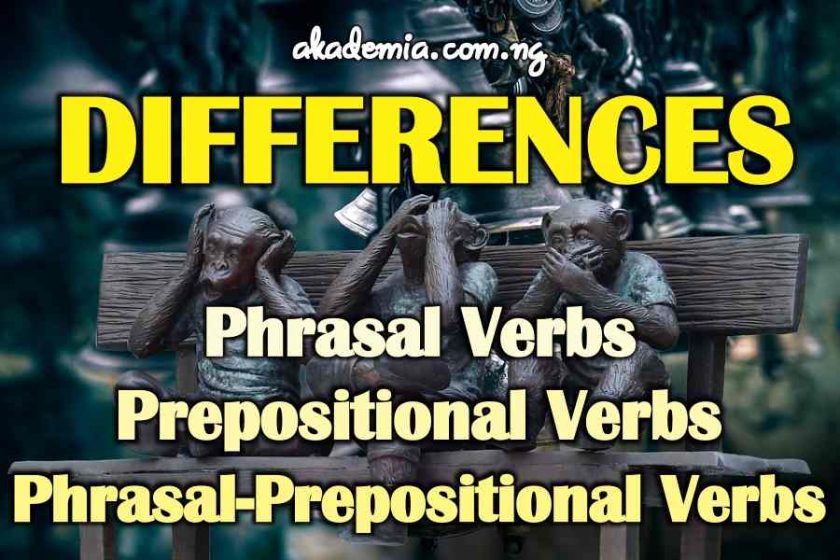 I am glad to find you always reading my posts on the language of the Queen! It is always heart-warming! Now, what do I have for you? It is to show you a very simple linguistic trick; how to know the Differences among Phrasal Verbs, Phrasal-prepositional Verbs and Prepositional Verbs.

Do you know what Prepositions are? If not do yourself a favour to check that out on this site. It might be pretty difficult to know the differences among these three linguistic concepts if you do not know what those concepts are severally! So take time out to read the post on Phrasal verbs, I have written extensively on them. You can also check out the post on Prepositional Phrase.

The following differences are distinct:

Insertion of an Adverb

The prepositional verb allows for the placement or insertion of an adverb between the verb and the preposition. Examples:

This cannot be done in the case of Phrasal Verbs or phrasal-prepositional Verbs.

Rather, we can have the sentence properly rendered like this:

This can, however, be recast thus:

Rather, the sentence can be recast in these three forms:

However, in the case of Phrasal-prepositional Verb, an adverb can be inserted between the adverb and preposition which cannot be done with Prepositional Verb or Phrasal Verb. Consider these examples:

Note also that in relative clauses and questions where the object is placed at the front, the adverb and preposition usually come after the verb. See the following examples:

It is good to note also that the noun phrase after a prepositional verb is sometimes called a prepositional object. Semantically, the role it plays in a sentence is quite similar to that of the object of a transitive verb. Consider and compare these two sentences:

It would be appropriate to give you rundown of all our gist so far:

If we use them in sentences, we can insert a nominal element (noun, noun phrase) or a pronominal element (pronoun) in between the verb and the prepositional adverb or particle:

I’m sure you can differentiate among these prepositional concepts as I like to call them. Can I give you a take home assignment? Very well then!

Attempt any five of the questions below on your own (you may need to consult other posts), while you do the remaining two with a friend.  Use your own generated sentences as examples to back up your claims!