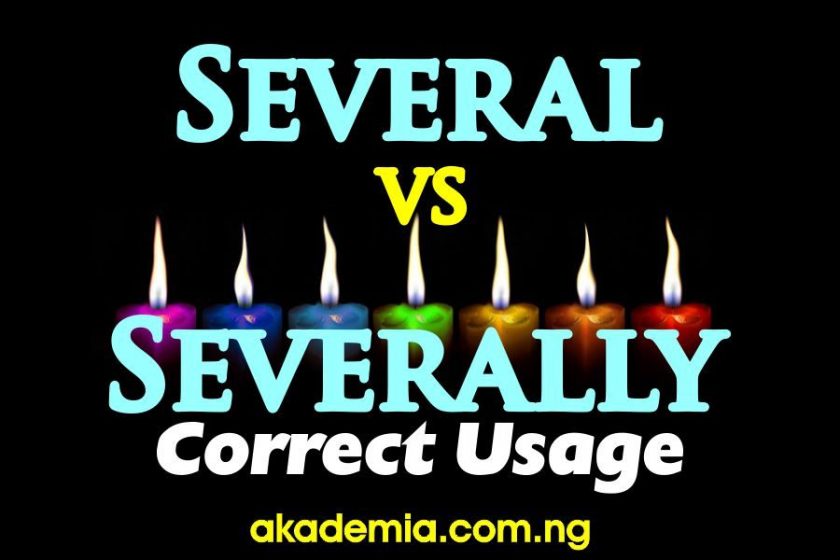 I once overheard someone say to his interlocutor: ‘*who authorite you?’ I knew he meant to say ‘who authorised you?’ Don’t laugh at this individual as you also have some words you use wrongly. This is why it is good for us to look at Several vs Severally: Correct Usage with Examples.

Now, this is really interesting! You cannot wriggle out of this as you are quite guilty of using this word wrongly. Look at these sentences before you begin to protest:

Before we look at the correct usage of several and severally, it is quite important to examine what these words mean. Let us attempt some definitions:

What Does Several Mean?

Several, as a determiner and a pronoun, is a grammatical word which indicates a small number (few); more than a few; an indefinite small number; more than two but fewer than many. For instance:

As an adjective (modifier) it means ‘various; separate’ as we have in these sentences:

Several also means ‘distinct; different’ as we have in:

In Law, the word several relates to separate persons; what is capable of being dealt with separately or what is not shared.

What Does Severally Mean?

Severally, as an adverb, connotes ‘separately, individually, or distinctly; each in turn; respectively’. So the idea or sense in severally is that of ‘one at a time’ and ‘apart from others – independently’. It has nothing to do with ‘many times’.

In the two sentences above, what the writer meant in the first sentence was that he came to the house many times while in the second sentence, John had on many occasions warned the boys. Let us see what this word really mean…

We have established above that severally means: separately, individually or distinctly; each in turn, respectively and independently. So going by the first sentence, we have an idea that the visitor to the house was probably a disembodied spirit! Let us learn to use this word appropriately. Let us illustrate this:

Examples of the Proper Use of Severally

So take note of this word and never use it in the wrong sense. There are other words that we use wrongly in English. I have two posts that address these anomalies. Commonly Used Wrong Words and Commonly Confused Words.  Make sure you check them out and share with your friends. You can use our Social Media share buttons. Keep improving your English! Keep learning and keep reading Akademia! Remember to drop your comments, questions and observations; I will definitely attend to them.