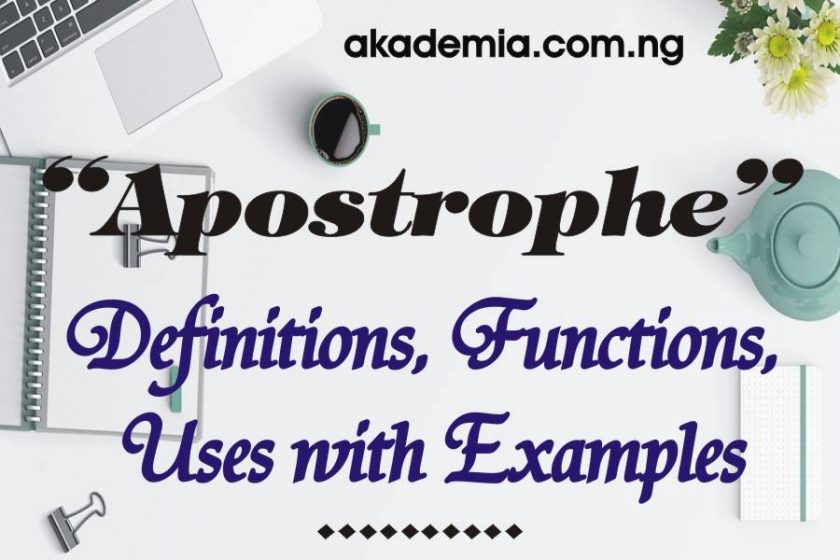 Welcome here! We want to take a look at Apostrophe – Definitions, Functions, Uses with Examples. This punctuation mark is an important one whose uses we need to know to put our writings in proper perspectives. What is an apostrophe? Let us see some descriptions…

Let us begin by looking at the definition or description (if you will) of an apostrophe and then proceed to look at its various uses with copious examples and then where not to use the apostrophe. Shall we?

This is a mark that we use to indicate possession and to show the contraction of some words.

When to Use an Apostrophe

We use the apostrophe, in contracted form, to mark the plural form of letters of the alphabet, figures, words discussed as words and expressions. We also use it to indicate the possessive case in nouns. In other words, an apostrophe followed by the letter s at the end of a noun signifies possessive case. Let us consider some instances of the uses of apostrophe…

In writing, we use an apostrophe to indicate that we have omitted one or more letters; that is, within contracted words, apostrophes replace the eliminated letters. However, in formal writing, we discourage the use of such contractions. Let us see some examples:

We use an apostrophe with the singular and plural forms of nouns and indefinite pronouns to show possession or ownership; that is, the genitive case. Check these examples:

When a word ends in ‘s’, there is no need to add another ‘s’ as you can see from the given examples. In addition, we do not use an apostrophe with the plural forms of possessive pronouns like his, hers, its, ours, yours, theirs. However, some modern guides on punctuation like Modern English Usage by Fowler state that with modern names ending in ‘s’, (including biblical names and any foreign name with an unpronounced final ‘s’), the ‘s’ is required after the apostrophe; as in

But when it comes to names from the ancient world, the ‘s’ is not required after the Apostrophe as in Achilles’ heel.  But for Jesus, there is always an exception – there is no need to add ‘s’ as in Jesus’ disciples, Jesus’ name.

When referring to plurals (words indicating more than one item) you do not need an apostrophe. Consider these examples:

These examples above are wrong as there is no need to add apostrophe to plural items. The correct forms are:

Apostrophe as Indication of Time or Quantity.

We us apostrophes to indicate time or quantity as we have in these examples:

Apostrophes for Plural of Letters and Figures

We use an apostrophe before an ‘s’ to form the plurals of figures and letters of the alphabet. Consider these illustrations:

Note: When it comes to the plural forms of letters in uppercase, add an ‘s’ but not an apostrophe. For example:

Omission of the First Two Digits of a Year

We use the apostrophe to indicate the omission of the first two digits of a year or years. For example:

Apostrophes are used to sow possession for singular compound nouns as we have in these examples:

Apostrophe for Two or More Persons

There are instances in which two or more persons share ownership of something. In such cases, the apostrophe comes after the name of the last person and then the addition of an ‘s’. Consider these examples:

However, if ownership is individually shared, that is if different nouns severally share the ownership of something, each noun takes an apostrophe. Let us see these examples:

Confusions to Avoid in the Use of Apostrophe

It is said that the apostrophe is one of the punctuation marks commonly misused, misplaced, and misunderstood!

Avoid confusion of the following:

The word Your is a possessive pronoun but You’re is a contracted form of You are.

This word Its is a possessive pronoun while It’s is a contracted for of It is.

When you look at the word Whose, it equally symbolises possession while Who’s is the contracted form of Who is.

Read more on the use of Whose and Who’s.

Do not use an apostrophe with the plural forms of possessive pronouns such as:

And possessive determiners such as:

To know whether to use an apostrophe or not, ask yourself these two questions:

If the answers to these two questions are in the affirmative, you might consider using an apostrophe within the various contexts of use we have talked about above.  You must also note that apostrophes are not markers of the plural form of the noun.

Never use an apostrophe before the ‘s’ in the plural of dates.

I am pretty sure you have learned a whole lot of useful information from this post, Apostrophe – Definitions, Functions, Uses with Examples. There are other punctuation marks you need to learn about; do not deny yourself the opportunity of checking them out and sharing the useful items of information with others. Remember to connect us on our Social Media platforms. See you around.