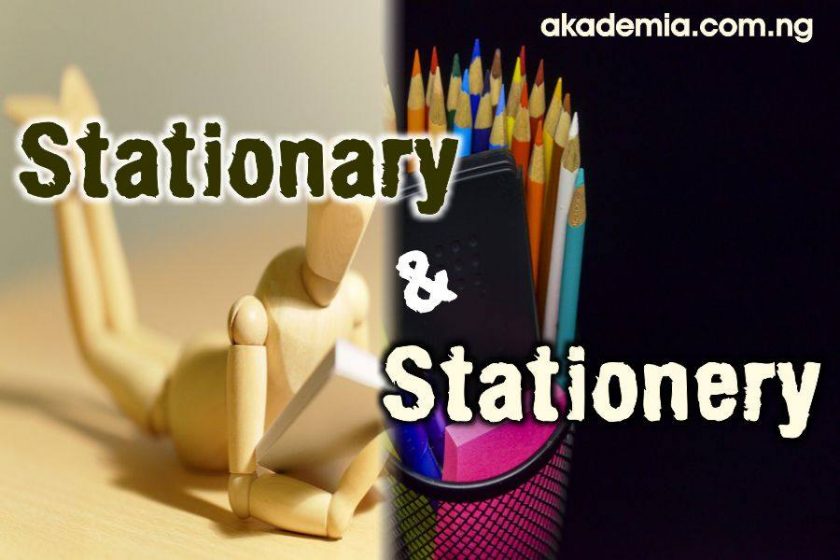 Welcome here! This post, aptly titled Stationary and Stationery: Meaning, Usage with Examples addresses the distinction between these two homophones beginning with their definitions. These words are homophones. Do you know what homophones are? (See the post, Homophones in English) Let us get to it…

Many people do not know the difference between these two words which are liable to be confused. You should not confuse the spelling of stationary with stationery. They sound alike but have completely different meanings.  Let us see what each means.

Stationary, as an adjective, means ‘not moving or standing still, immobile or fixed, unchanging or static as in:

Stationery, as a noun, refers to ‘materials (as paper, pen, ink, etc.) for writing or typing’ including envelopes, as in:

It depends on what you mean to say or the context from which you talking. There is nothing wrong with the two words. The common problem that arises for users of the words is that of spelling.

Difference between Stationary and Stationery

In addition, stationary is an adjective meaning ‘not moving’ which we normally use in reference to vehicles; however stationery is a noun meaning ‘paper and other things we use for writing, alongside envelopes, which might help you in remembering the letter ‘e’.

Here, we are referring to another word for stationary. Of course, there are more than one word that are synonymous to stationary. I am sure you don’t mind some synonyms for this word. They include but not limited to the following:

Stationary in a Sentence

More Sentences with the Word Stationary

In a nutshell, we have examined the two words that users can easily confuse: stationary and stationery. Remember the definitions of these words and the cues we gave in recognising the difference between these two words. There are other similar words that require clarifications and some others that users have the likelihood to confuse.

I have put together different posts on such words. Ensure you check them out. These include: further and farther, several and severally, elder and older, ok and okay, efficiency and effectiveness, surpass or supersede, ingenious or ingenuous, rout vs route, affect or effect, belief or believe, academia and academic, and many others.

Remember to share this post! That is just a button and a click away! Thank you. Drop your comments and questions; I will definitely respond to them.